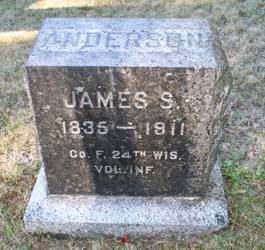 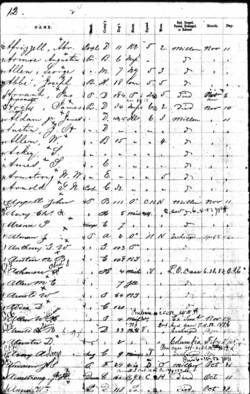 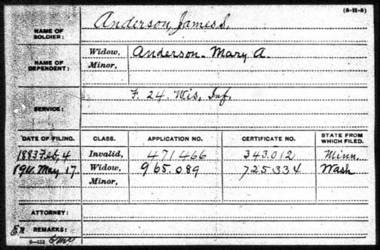 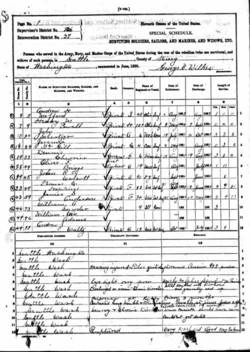 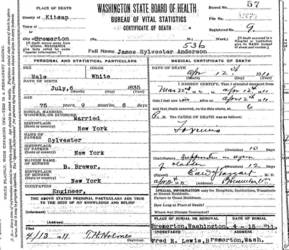 Obituary published April 15, 1912
COMRADE JAMES S. ANDERSON PASSES TO HIS LAST REST.
James S. Anderson, aged 76 years, died at the Bremerton Hospital at six o'clock on Wednesday evening of this week. Comrade Anderson had been employed as locomotive engineer in the navy yard for the past six years. Some weeks ago he met with an accident while running his engine which confined him to the house for some time, but recovering somewhat he resumed work only to be compelled by failing health to again leave his work. He went to the Bremerton Hospital where on March 21st he underwent a surgical operation. While the operation itself was successful he failed to improve as had been hoped and the end came Wednesday evening.
In the death of Comrade Anderson Bremerton loses a noble citizen and his comrades of the Grand Army of the Republic, to which order he belonged, an esteemed and loyal friend. Comrade Anderson had recently completed his fine home on Fourth Street in which he took much pride and where he and his noble life companion had planned to pass their declining years in comfort, happy in each other's company.

James Sylvester Anderson was born in Pavillion, N. Y., July 6, 1835, the youngest of eight children. Came to Michigan when he was 17 years old, was married August 27,
1862, to Mary Anice McWhorter at New Lisbon, Wisconsin. Joined Company F, 24th Wisconsin Volunteers and served three years. For eighteen years he had charge of the
Shops of the Chicago, Milwaukee & St. Paul road at Austin, Minn. He was a charter member of St. Bernard Commandry, K. T., and a member of Gen. Grant Post, G. A. R., Bremerton, of which he was Past Commander. In 1888 the family moved to Seattle and later to their present home in Bremerton, where for the past six years he had had the position as engineer in the navy yard. He leaves a wife, and son, Wert F. Anderson, of Toppenish, and a daughter, Mrs. Chas. P. Squires, of Las Vegas, Nevada.

Mrs. Anderson is nearly prostrated by the great affliction that has come upon her and to her and the children and other relatives the sympathy of their many friends is extended in the fullest measure.