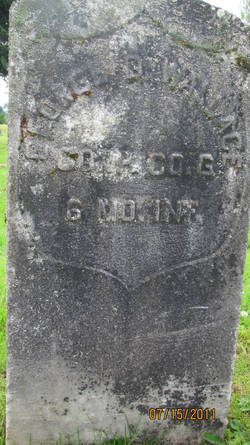 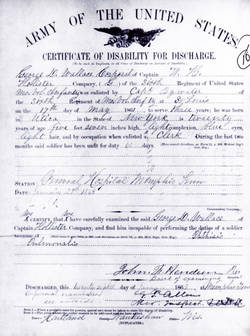 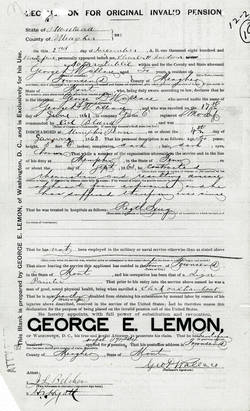 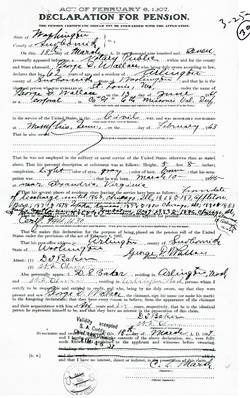 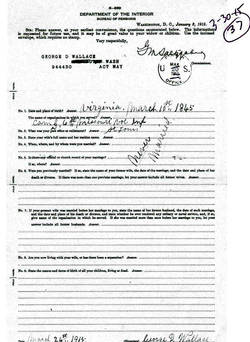 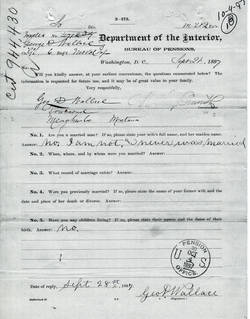 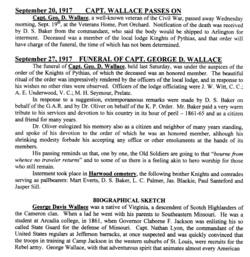 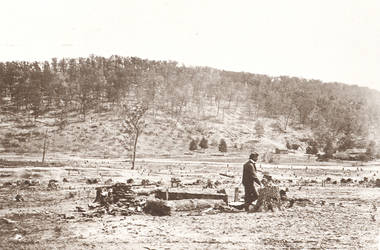 The 6th Missouri Infantry was a 3 year western theater regiment. Following its organization and Federal muster on, 7/10/61, it was ordered to Pilot Knob, MO and from there was placed on duty at various points within the state. Those assignments lasted until April, 1862 when the regiment was sent to Corinth, MS, arriving there in time to take part in the June battles about that place. While in Corinth the 6th was engaged in the operations about Holly Springs, MS plus LaGrange and Moscow, TN. That fall it was in the battle of Chickasaw Bluffs and, although it distinguished itself by its bravery, suffered heavy losses at Arkansas Post.

1863. The 6th was then in the campaign against Vicksburg, MS and in the actions against the forces of Confederate General Pemberton after that city's surrender in early July. In September it departed Mississippi for Memphis, TN and from that location marched across Tennessee to Chattanooga in time to participate there in the battles of Lookout Mountain and Missionary Ridge.

From Chattanooga the regiment was ordered to Knoxville from whence, in early 1864 it was moved to Larkinsville, AL. There, a majority of the men re-enlisted and received their (30 day) veteran furlough. Upon returning to the field the 6th joined the forces of Union General W.T. Sherman as they advanced upon Atlanta, GA. During this epic movement the regiment was engaged at Resaca, Dallas, Kennesaw Mountain as well as the battles in front of Atlanta and Jonesboro.  It then followed retreating to the Little River near Gadsden, Al before returning to Atlanta to march to the sea with Sherman.

In January, 1865 the 6th moved by transport to Beaufort, SC where it began the march northward through the Carolinas with Sherman's armies. During the battle of Bentonville, NC it made a gallant charge diving back the enemy and holding the gained ground until reinforcements arrives.

With the final surrender of Rebel forces the 6th went to Washington City where it participated in the Grand Review. From there, in June, it was ordered to Little Rock, AR where it remained until August when final muster orders were received. The regiment then returned to St. Louis for discharge and disbandment.

While one documental source points to George D. Wallace having been born in Utica, New York, most arrows point toward his birthplace as being near Arlington, Virginia. His date of birth was 3/10/45. His parents were farmer George T. (b. 1812 VA) - who may or may not be the same George Wallace found in the 1840 Norfolk (Co.), VA slave schedule - and Elizabeth R. (nee Lewis b. 1816) Wallace. The1850 U.S. Census found the Wallace family residing in St. Brides, Norfolk Co., VA. Members of the household besides George T. and Elizabeth included George D.'s older brother John (b. 1840) and younger sister, Annis (b. 1850). No census information can be found in 1860 for the Wallace’s.

The first real paperwork for George D. (henceforth referred as George Wallace or simply, George) begins at St. Louis, MO when, on 5/15/61 at the St .Louis Arsenal, he was recruited by a Captain Wate to become a private soldier within Company "B" (a designation which would shortly be changed to "G") 6th Missouri Infantry (Union) for three years. At that time, his enlistment "contact" address was noted as being that of a cousin, L.B. Jones of Hartland, WI. Other vital data collected was as follows: Height = 5'7"; Complexion = light; Eyes = blue; Hair = light; Occupation = clerk on a steamboat (3 yrs.); Age = 20.  Whoa. Either the birth/family information presented above does not apply to our George Wallace, or his age was "exaggerated" at time of enlistment. During the American Civil War, this was known to have been done!! For our purposes herein, we are going to remain with 1845.

George's company muster rolls read as follows: On October 31, 1861 he was a Private. The following day he was promoted to the rank of corporal. From November 29 to 12/31 he was on the rolls of USA General Hospital Tipton, MO (No diagnosis avail.) Shortly thereafter, on 12/18 he was reportedly on "extended leave." Three days later (12/21) Corporal Wallace was attached to the hospital as a cook for which he would receive "extra pay", while on 12/31 he was reported as having been AWOL for three days. On that same 12/31/61 date, however, it was noted that he was attached to the Tipton hospital as a cook and - for the next 47 days - was due extra pay.

Present for duty was the log entry for Corporal Wallace for the next nine months of 1862, but the notation for 6/19 carried the added information that he had "taken sick with dysentery before left Corinth (MS) probably due to poor water."  As of 12/20 Corporal Wallace was noted as being "absent sick in Memphis (TN).”

The year of 1863 opened with this 1/4 muster notation: Unfit for duty past 60 days. Became sick with dysentery 6/19/62 at parallel before Corinth - poor water.  Became chronic. On 1/28/63 in Memphis, TN George was granted a medical discharge from the army.

The service behind him, George settled in Chicago, IL. He remained there for around five years then moved to Appleton, WI. From there, in 1871 he removed to Topeka, KS and, seven years later, in 1878, he returned to Chicago.  What prompted these moves during this period of his not documented? Also, not documented is what livelihood he pursued during these years.

1880. A new decade; a new census.   This tally found George residing in Leesburg, Loudon Co., VA where he was noted as "farmer." However, pension files also cryptically note that from this year (1880) to 1883 he travelled to, or perhaps moved to, the Pacific Coast on some unspecified re-assignment. Then, in 1883 he left the Pacific coast and between that year and 1886 lived in Chicago, IL and Waukesha, WI. Moving continued as sometime circa 1888 George apparently left Wisconsin and moved to Townsend Broadwater County, Montana. The following year, on 11/1/89, a Montana physician noted: "I have known (George) since about 1888." The doctor, it appears, was treating him for chronic rheumatism and heart problems which stemmed from the rheumatism.

In 1895, while still in Townsend, Montana fifty year old George officially began the paperwork process to obtain a U.S. Government disability pension based on ailments which he claimed traced back to his Civil War soldiering days. Bases for this claim were rheumatism and heart trouble. At some undocumented point thereafter he was granted a $6 per month stipend. That dollar amount would grow before his passing.

1898. Responding to a request from the pension department for more information he indicated his address was then Seattle, King Co., WA Territory, but didn't know if it would be permanent. It was not. By 1900 he was living north of there in Arlington, Snohomish County, WA. That census noted him as of a household which contained to male boarders. George's occupation was listed as "head painter." George apparently operated a sign painting company.  Earlier he had likely worked for some large sign company. This could explain the reassignments/many moves that dotted his earlier post-military life. He moved to where the painting work was located. Perhaps his talent was in creating and executing large signs painted on building exteriors. In 1907 he reportedly did his last work in the Arlington/Stanwood area of Snohomish County, WA.

Orting Pierce Co., Washington. One of Washington State's two "old soldiers" homes was located there. George had apparently moved there from Arlington sometime after 1912 -perhaps in early 1915.  It was on 4/14/15 from that town that a pension increase from $16.50 per month to $21.50 per month was requested. The request was granted, but it would be the last received by the former Civil War soldier.

George D. Wallace died on 9/19/17 in Washington's other soldiers home located in Retsil, Kitsap Co., WA. He had never married and left behind no children. His earthly remains were returned to Arlington for burial in the Harwood Cemetery.