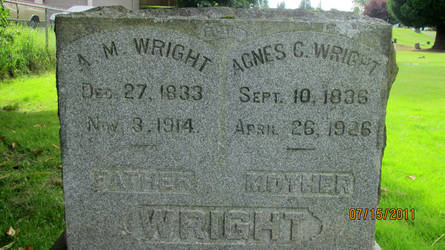 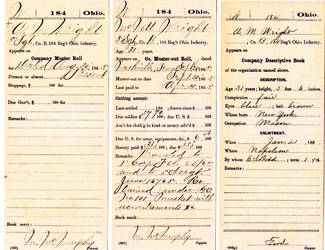 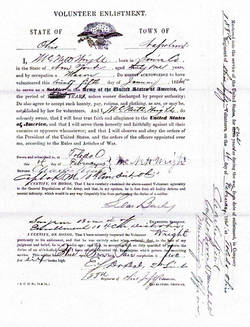 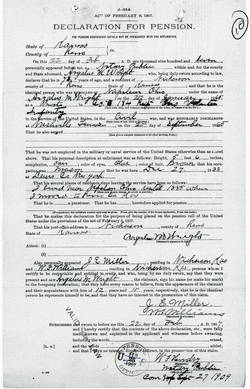 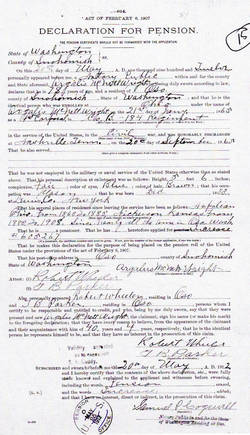 This one year “western theater” regiment was formed in the waning days of The Rebellion. Immediately after Federal muster it was ordered to Nashville, where it remained for a short time performing garrison duty. From there it moved to Chattanooga and thence to Bridgeport, AL which it reached about March 21st. At that location it was engaged protecting an important railroad bridge over the Tennessee River. It also guarded the track between Bridgeport and Chattanooga, a distance of about thirty miles. On July 25th the 184th was ordered to Edgefield, SC for garrison duty. It remained there until mustered out of service. While generally performing non-combat duties, the regiment likely had at least some combat contact with the enemy as existing records show that one man was mortally wounded.

Argalus McNett Wright was born in Lewis County, New York to parents Alvin (b.1/1787) and Martha Patty McNett (b. 1790) Wright.  No birth date or year is found in available documents. However, if one accepts that he was thirty one years of age at the time he entered the U.S. Army then his birth year would have been ca 1834.

As information on Argalus’ birth family cannot be found in any early census documents, the only thing known about it is that Argalus had at least one sibling, a brother named Thomas. It is not known if that brother was older or younger than he.

While both pre and post war censuses list Argalus' name as A.M. Wright, on his military enlistment and muster roll papers his name was noted as McNett Wright. In later years Mr. Wright would sign documents as Argalus and A.M., but never McNett.

By mid-1855 Argalus had left his native state of New York. Exactly when and why is not documented. However, on 7/22/55, in Napoleon, Ohio Argalus married.  His bride was Agnes Caroline Clark (b. 9/10/36 Carlisle, PA). The couple would settle and start their family in Napoleon, which was located in Henry Co.

The U.S. Census for 1860 found Argalus farming in Napoleon. In his household at the time was wife Agnes. (age 23), the couple's first son, Frank W. who had been born 6/13/57 and his parents.  In this census the elder Wright is identified as Alvin, a farm laborer likely working on his son's farm. The following year, on 3/23/61 Argalus and Agnes' second son, Alvin E. would be born. A third child, daughter Ella M. would enter the world in 1863 (no birthdate or month given). In 1900 Agnes would tell census takers that she had born four children, two of whom were then living. Based on this information, the identity of the "fourth" Wright child is not known. Perhaps he or she died during or shortly after birth.

In January, 1865, with four years of bloody civil war grinding to a close Argalus chose to leave his family in the hands of his parents and join the U.S. Army. Perhaps this decision was based on the availability of a $100 enlistment bonus or "bounty" and the knowledge that at this late date, newly formed regiments would be given "reach echelon, non-combat" assignments. Whatever the motivation, on the 25th of January, the 31 year old Argalus became a member of Company "B" of the 184th Ohio Infantry. His enlistment was credited to Napoleon, Henry County and the 10th (legislative) district. The enrollment period was one year.

At enlistment Argalus's vital statistics were noted as follows: 5" 6 or 7" in height; blue eyes and brown hair.  Interestingly, at that time his occupation was noted as "mason."

Initially entering the service at the rank of private, Argalus did not long remain there, perhaps because he was older and more mature than the average 27.5 year old Civil War serviceman. Whatever the reason, on 2/22 he was promoted to 1st corporal of his company and, on 6/16, because of a vacancy created by the discharge of his company's orderly, he was elevated to the rank of 5th sergeant. He would maintain this level until his final muster and discharge which came on 6/16/65. At that time, with financial accounts settled with Uncle Sam, Argalus returned home to Napoleon with his "musket and accoutrements" which he had purchased for $6.

1870. The U.S. Census for that year found the Wright household remaining in Napoleon. Besides his wife and three children, also under Argalus' roof at the time was a female housekeeper and a male whose occupation was noted as "plasterer."  Plasterer, too, was noted as being Argalus' occupational trade as it was again in 1880.  This latter tally noted the household comprised only of A.M., Agnes, plus children Frank (now also a plasterer), Alvin and Ella.

While available documentation is silent on the matter, circa 1885 the Wrights quitted Ohio in favor of the community of Nickerson located in Reno County, Kansas. The family would remain there until late 1907 when they relocated to Everett, Snohomish County, Washington.

On March 5, 1891 56 year old former Civil War soldier McNett Wright petitioned the U.S. Government for a pension based on his service during The Rebellion. Although the exact grounds for it being granted are unclear - an injury or illness dating to his period of Civil War service, age, or just the fact that he had served the Union - at some point, shortly thereafter, he was granted a $12 per month. It appears that stipend had topped out at $22.50 by the time of his passing.

Jumping ahead to 1910. In Everett, Washington, the census for that year noted the 76 year old mason/plasterer heading a household consisting of he, his wife, son Alvin and three grandchildren.  The grand children were apparently Alvin's children.  Alvin E. with wife Clara child Alvin M. were noted in the 1886 Kansas census tally. The same is true for 1895. Perhaps Alvin E and family had moved to the Pacific Northwest where Clara died or the couple separated/divorced. That being a possibility, perhaps Argalus and Agnes had moved from Kansas to the Pacific Northwest to help care for the motherless grandchildren.

By 1912 the Wrights had departed Everett and moved northward in Snohomish County to the small rural community of Oso. It appears the family group - at least of Argalus, Agnes and son Alvin - likely made the move because of Alvin obtaining a job in that area's timber industry. If that was the case, the absence of the “grandchildren” may, in fact, denote Clara’s separation/divorce rather than her death.

1914. Dropping back many years, it should be noted that Argalus’ father had served in Captain Babcock’s Company, New York State Militia during the War of 1812. It appears that as a result of that service the elder Wright had been granted a 160 acre homestead land tract by The State of New York.  Argalus’ father died in 1867, his mother in 1868. As of mid-February, 1914, Argalus, as administrator of his late mother’s estate appears to have had to deal with that, or at least a, land grant which seems to have been located near Denver, Colorado. One fact that makes this situation so confusing is that the land grant was located so far west. Another is why the name Ralph (Wright) appears in connection to the property.  The disposition of the land matter is not documented.

Later, that same year, on11/3/14, in or near Oso, Washington, Argalus died. He was buried in the Haywood Cemetery located in the nearby community of Arlington.

After Argalus’ death Agnes remained in the Oso home now headed by her son Alvin. Almost immediately after her husband’s passing she began the paperwork process to gain access to at least a portion of her late husband’s Civil War-based pension stipend. That process continued into the following year when, on 6/11/15 she was granted a monthly stipend.  Although the initial dollar amount is not given, her monthly payment had risen to $30 per month at the time of her death on 3/4/26.  She was buried in Arlington beside Argalus.