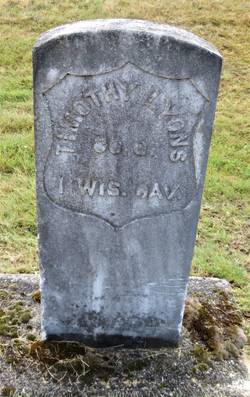 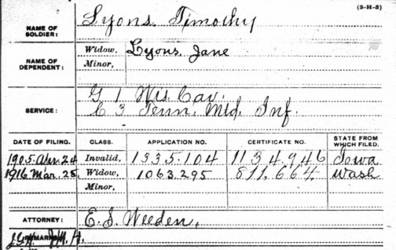 Historical Notes:
The 3rd Regiment, Tennessee Mounted Infantry was organized at Loudon, Strawberry Plains and Knoxville July to September, 1864. This was a three months Regiment and was never fully organized. No rolls of the organization were furnished. Mustered out November 30, 1864.

The Muscatine Journal (Muscatine, IA), 14 Feb 1916 (Mon), page 12
Timothy Lyons, a pioneer resident, who resided in Muscatine until about seven years ago, succombed on January 25 at his home in Burlington, Wash., according to a communcation received in this city by relatives.
The deceased was a native of Ireland, and was born July 14, 1839, coming to this country while still a youth. He was 76 years of age at the time of his death. He was a veteran of the Civil War, having enlisted in Wisconsin. On September 5, 1869, he was united in marriage to Miss Jane Richardson, of this city, and to this union nine children were born, seven of whom survive. They are: Mrs. Emma McClelland, Mrs. Margaret Clark and Miss Bessie Lyons of Burlington, Wash.; Winfield and Alva Lyons of Tacoma, Wash.; Arthur Lyons of Milwaukee, Wis., and A. F. Lyons of this city.
The remains were interred in the Maccabee cemetery at Burlington, Wash.