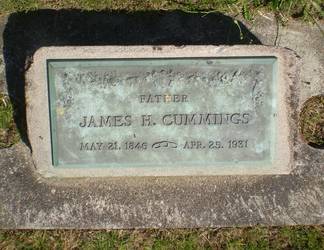 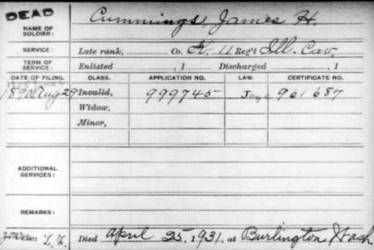 J. K. . CUMMINGS
Retired from a life of mercantile pursuits, and spending the closing years of his life in peace and quiet at Kirkwood, is a native of Scotland, having been born in that country July 4,1813. The parents of Mr. Cummings, Israel W. and Susanna (Kerr) Cummings, were natives of Massachusetts and Scotland respectively. The father was a sailor in his younger years, and from his native country he went to Scotland, where he was married and where the subject of this notice was born. In 1828, the father with his family came to the United States, and for a time resided in the father's native State, Massachusetts. He then moved his family to Maine, where for ten years he was engaged in farming. In 1837, the father sold his landed possessions in the latter State and with his family came to this State, locating in Fulton County, where the father purchased 192 acres of land. He moved on the land with his family and at once engaged in the laborious task of improving it, by cultivation, the erection of a residence, the setting out of trees, etc., and there continued to reside until his death, which event took place in 1854.
The gentleman whose name we give at the beginning of this biographical notice, was an inmate of the parental household until he attained the age of 20 years, having received a fair education in the district schools. At this a fair education in the district schools. At this age in life he engaged to learn the carpenter's trade, at which he served apprenticeship of three years, fully and completely mastering the same, after which he followed his trade in Fulton County from 1838 to 1856, a period of 18 years.
Mr. Cummings came to Warren County in 1855 and in 1856 moved to Kirkwood. In 1859, he engaged in the grocery business at that place, and was thus occupied for 12 years. He then sold out and began the hardware business and followed that for five years, when, in 1878, he sold the same, and since that time has lived a life of comparative retirement, doing nothing except a little insurance business. He is the proprietor of a farm of 162 acres, one mile and a half from Kirkwood, and is enjoying the comforts, which a life of business activity coupled with energy has acquired.

In 1836, Mr. Cummings married Miss Mary Eveleth in Kennebec Co., Maine, she being the daughter of Joseph and Eunice (Jennings) Eveleth, four children being the result of this union, -- Susan Jane and James H., Melissa E. and Eunice A., who are deceased. Mrs. C. died in the year of 1878. Mr. Cummings again formed a matrimonial alliance with Miss Eliza Bowen in 1879, a native of Ohio.

In politics, Mr. Cummings votes with the Republican party. He has held the offices of Assessor and Collector of Tompkins Township, and is one of the honored and respected citizens of Warren County.