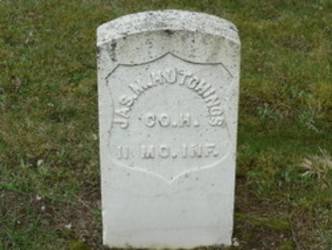 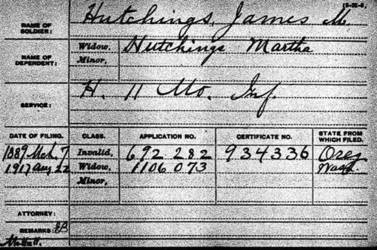 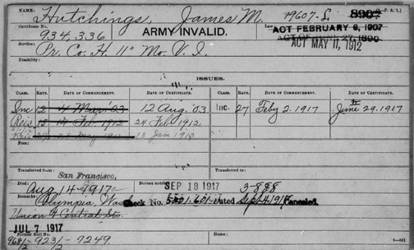 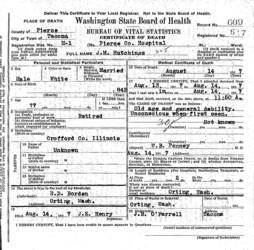 from FAG members Margie & Bob:
CIVIL WAR VETERAN
James M. Hutchings was born February 1839 in Crawford County, Illinois. He
listed his first marriage as having occurred in 1864 in Palestine, Illinois.
His second marriage was on January 1, 1900 in Montesano, Washington to Mrs.
Martha Bosley. His name was entered as James M. Hutchinson on the marriage
record.
Enlisted March 1864 in Palestine, Illinois; assigned to Company H, 11th Missouri
Infantry; and discharged January 21, 1866 with the rank of private.
He died August 14, 1917 per his Orting home file and was survived by his widow,
Martha, and three children from his first marriage: Ira A. Hutchings of
Brownsville, Ore., Sarah Frances/Franks of Portland, Ore., and Anna
Frances/Franks, East Portland, Ore.

Martha Hutchings was born March 1844 in Ohio. Her first marriage was to Thaddeus Bosley. The couple was living in Osage, Kansas in 1870. Thaddeus was 24, she was 25, and Thomas was 4, Wilbert Lincoln was 3 and Atta was 4 months old. In 1880. Her children, ranging in age from 1 to 14, were Annie, Alvin, George, Walter, Attie, Wilbert and Thomas.

In 1898, Martha was widowed and living in Garfield, Washington with son George Bosley, 20, daughter Myrtle Helm, and grandchildren Elmer and Goldy.

Martha was the widow of James M. Hutchings, who died 14 August 1917. They were married in Montesano, Washington on January 1, 1900. Mr. Hutchings was a civil war veteran. He enlisted March 28, 1864 in St. Louis, Missouri; served as a Private in Company "H", 11th Missouri Infantry; and was discharged January 16, 1866 in Memphis, Tennessee. In 1910, Mr. and Mrs. Bosley were living with her son Harrison Bosley in Olympia, Washington.

She was the mother of nine children; however, one had died by 1910 and another had passed away by 1924. She listed her seven children living from a former marriage as Attie Goodwill, Los Angeles, California; Walter Bosley, St. Paul, Kans., George Bosley, Salem, Ore.; Alvin Bosley, Gillette, Wyoming; Anna Snyder, Seattle, Wash., Mrs. Nora Ford, Tacoma, Wash.; Harrison Bosley, Elma, Wash.

I find a James M. Hutchings Company H 11th Missouri buried at Orting 8-14-1917. Hutchings was from S. Illinois where many enlisted into Missouri regiments as Illinois quotas were filled. Most enlisted at Sumner Illinois in Co G & H. You can find cem photo on findagrave. Thanks. I may have more to follow. Thanks David.