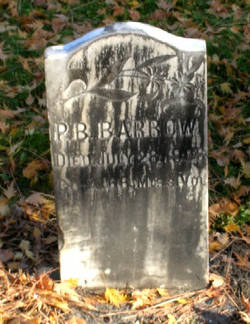 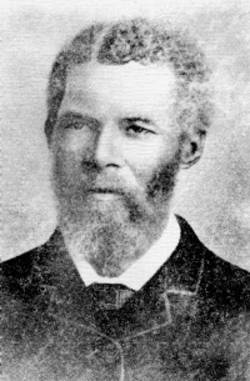 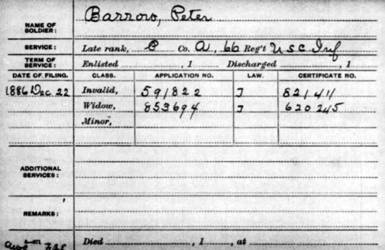 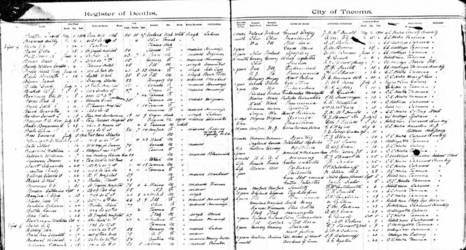 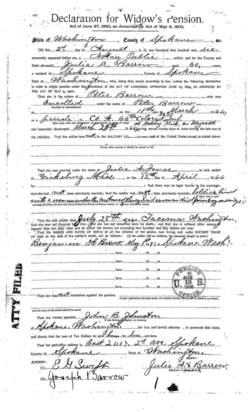 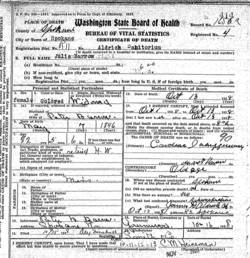 Rev. Peter Barrow moved his family from Mississippi to Spokane, Washington in 1889. Almost immediately upon arriving, he began to involve himself politically and religiously in the city's early life.

According to Union Army Pension Records, Barrow was born a slave near Petersburg, Virginia and as a child was taken to a plantation near Cosita, Alabama. When the Union Army came through the area early in 1864, Barrow took his freedom and reached Vicksburg, Mississippi where he enlisted in Company A, 66th U.S. Colored Infantry on March 11, 1864. He remained in the Union Army until March, 1866. Barrow served in Louisiana and Arkansas during the remainder of the War.

Barrow settled in Vicksburg after the War and soon entered politics. He was elected to the Mississippi Legislature where he served two terms. After that period he could see the handwriting on the wall, so he decided to bring them out of the South."

Peter Barrow's political activities included founding the John Logan Colored Republican Club, being nominated for political office by the Populist Party, and helping lead the Farmer's Alliance Movement in Washington State. In 1890, he and his wife, along with several others, established Calvary Baptist Church, the oldest historically black church in Spokane, where Rev. Barrow served as pastor from 1895-1906. In July of 1902, he helped host the Third Annual State Convention of the Colored Baptist Church at Calvary, giving an evening address to the attendees. His life ended tragically, when, as his granddaughter related, "He was killed in a street car accident in Tacoma, where he had gone for a church convention." But his legacy lives on in the congregation he founded, and in the Barrow family name, which is still inscribed on the cornerstone of Calvary Baptist Church.

Rev. P.B. Barrow, Sr., who died at Tacoma Saturday as the result of a street car accident on the 23d of July, is a well known and highly respected citizen of Spokane. Rev. Barrow came from Mississippi to the territory of Washington in the year of 1889, and immediately set about the work of organizing a colored Baptist church. Whit this object accomplished, he was chosen its first pastor, being succeeded some time later by Rev. J.P. Berkham.
He was for many years very active in religious charitable and political movements, affecting the welfare of his race. He was a war veteran, being a member of the G.A.R. post of this city in 1892. Rev. Barrow was nominated for presidential elector on the populist ticket and ran several thousand votes ahead of his ticket. In 1894 he was nominated for the lower house by the populist party, and again ran ahead of his ticket. In late years he retired from political activity, devoting himself to charitable and religious work exclusively. He was a state senator in Mississippi in the early reconstruction days, and one of the leaders in the farmers' alliance movement in this state.
Rev. Barrow has accumulated a comfortable competency, owning his home at E2117 Second avenue, and a farm of 160 acres at Deer Lake, Stevens county, Washington. He leaves a widow, six sons and one daughter; Joseph Barrow of Portland, Ore.: Peter Barrow, Jr., Charles Barrow, James Barrow, John Barrow, and Benjamin Barrow and Miss Lizzie Barrow, all of Spokane to mourn his loss. The remains arrived from Tacoma this morning accompanied by his sons, Joseph and P.B. Barrows, Jr. The funeral will occur from the Cavalry Baptist church at 420 Third avenue, at 2 p.m. tomorrow. Rev. Felix Barr officiating. Interment at Greenwood cemetery.
Rev. Barrow's death has been greatly deplored among all classes and citizens, who have known him so long and favorably, and many tokens and messages of condolence have been received by the bereaved family.

Julie was the wife of Peter Barrow. The couple married on April 12, 1866 in Vicksburg, Mississippi. (It was the first marriage for both, although Mr. Barrow "had lived with a woman under the customs of slavery.")