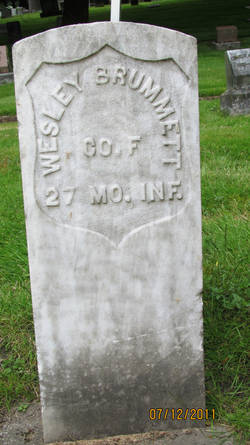 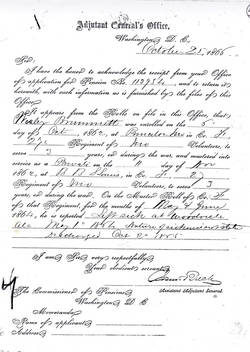 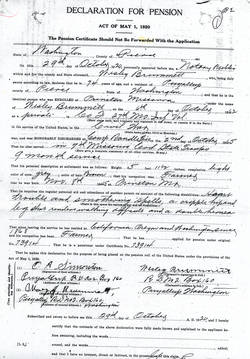 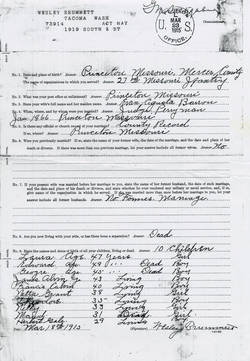 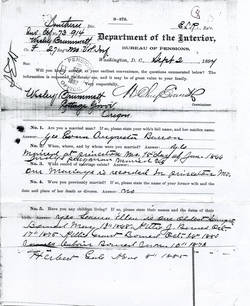 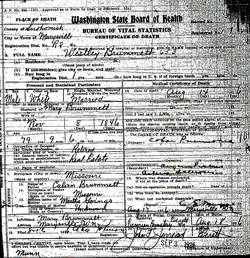 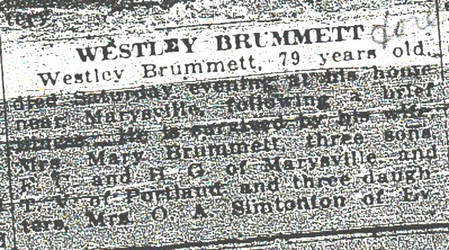 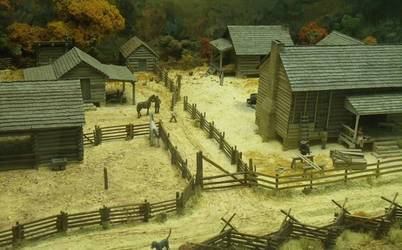 * Note:  Service in this unit was under the name William Brummett

No regimental history appears to have been written for the 7th Missouri State Militia (MSM) Cavalry. Considering its span of existence it was likely fairly well-armed and uniformed. Also, it was apparently a three- year unit, but distinctly separate from another three-year unit, the 7th Missouri Cavalry, whose period of existence tended to overlap and co-inside with that of the 7th MSMC.  After action reports written by officers of the 7th M SM Cavalry reveal that the unit's primary function appears to have been to track down and destroy Rebel guerilla units and other predatory, bands within the State of Missouri. As 7th M SMC losses show, this was not an easy assignment.  Regimental losses: Officers killed or mortally wounded = 4; Officers died of disease, accidents, etc. = 6; Enlisted men killed or mortally wounded = 56; Enlisted men died of disease, accidents, etc. - 152.

Recruitment for the 27th, a three-year "western theater" regiment, commenced in 8/62. Around 9/1/62 four companies were mustered into Federal service. Additional companies to fill the regiment's ranks came from the already veteranized 5th and 6th Missouri infantry regiments. Following Federal muster the regiment was ordered to Vicksburg, MS where it joined Union Gen. Wm.T. Sherman's Corps. From that time until 1/65 it shared the honors and hardships of that corps in the Atlanta and Savannah, GA campaigns.  On 6/13/65 companies A,B,C,D,E, H and K were mustered out while companies G and I were united within the consolidated battalion known as the 31st / 32nd Missouri Infantry.

A three-year "western theater" regiment, the 32nd was formed in 10/62 and immediately took to the field. It was with Union Gen. Wm. T. Sherman at the battles of Chickasaw Bluff, Arkansas Post, Jackson Brand and the siege of Vicksburg, all in Mississippi. It also saw action at Cherokee and Tuscumbra, AL before moving to Lookout Mtn. and Missionary Ridge near Nashville, TN. Combat duties followed during the skirmishes and principal battles of the Atlanta, GA campaign.  By fall, 1864, the ranks of the 32nd had thinned to a point where the regiment was consolidated with remnants of the 31st MO Infantry to form a "consolidated 31st/32nd battalion.”  This unit then marched to Savannah and northward through the Carolinas with Sherman's forces.

On 5/24/65, in Washington, D.C.  the 31st/32nd Battalion participated in The Grand Review.  On the final day of that same month the 31st/32nd was ordered to Louisville, KY where, on 6/20 because of an influx of troops from the 27th MO Infantry, its designation was changed to the 32nd Missouri Infantry.  It was under this nomenclature that the unit was mustered out of existence.

In 1862 Wesley joined the 7th Missouri State Militia Cavalry. Only 16 years old and not living with his parents, it appears he enlisted under the name of William Brummett, his 18 year old brother. The enlistee has to be Wesley because William's name does not appear on any other Civil War unit roster and, later in life,  when applying for a U.S. Government disability pension based upon his Civil War soldiering, Wesley was credited with being a member of the state unit.

Although William/Wesley's paperwork from the 7th show's him on their rolls until the end of the war, other documentation indicates private Brummett had moved to the 27th Missouri Infantry by October of '62. Still 16 years of age, but claiming to be 18, he entered this unit under his true name and, obviously, was accepted into the ranks. Consolidation of the 27th into the 31st /32nd Missouri after the war's end does not specifically mention Wesley's company, but his pension accreditation indicates this is what occurred.

Available documentation indicates private Brummett did not suffer any significant disabilities during his Civil War pilgrimage. The only notation pertaining to this was an 1864 entry that on 5/1 he had been "left sick" in Woodville, AL. Still, in later life Wesley would request and be granted a U.S. Government disability pension based on recurring ailments/illnesses stemming from his period of Civil War soldiering. At death he was receiving a princely $72 per month stipend.

From at least 1870 until 1894 the Brummetts were in northern California. Three years later they had moved northward to Cottage Grove, OR. At the time of the 1900 U.S. Census the family was in Walla Walla, WA where Wesley was employed as a meat cutter.  Continuing their northward moves, by 1910 the Brummetts were in Tacoma, WA, the city in which Mrs. Brummett was born.  It was four years later, on 10/6/14 Augusta Brummett died in Pierce County. The cause of her death is not known.

In 1915 Wesley was still in Pierce County. At that time he noted in pension request documents that three of his children, Edward, George and Maude, were deceased.

The 1920 census still placed Wesley in Pierce Co., WA. By that time, however, he had remarried to a woman now identified only as "Mary."  Wesley and Mary were farming in Puyallup, WA. Also in the home was son "Frank." Pension documents from this period indicate Wesley to be 5'11 1/2" tall, having a light complexion, gray eyes and brown hair. Disabilities’ bothering him which he traced to the Civil War were heart trouble, smothering spells, a double hernia and a crippled hip and leg that rendered walking difficult.

In 1925 Wesley and Mary moved further northward in Washington near the community of Marysville in Snohomish County. However, there is at least one piece of documentation that hints that, for a time, the couple resided in the Snohomish County City of Everett. It was in Everett’s Evergreen Cemetery Wesley would later be buried.

It was in or near Marysville on 8/14/26 at the age of 79.8 that former Civil War soldier Wesley Brummett died "following a brief illness." Cause of death was listed as lobar pneumonia with angina percosis and arteriole sclerosis contributing. His occupation at death was noted as retired from the real estate business. His Everett Herald obituary noted he was survived by three sons, E.C. ad H.G. of Marysville and T.V. of Portland, OR. Also, three daughters, Mrs. O.A. Simonton of Everett, Nellie Carpenter of Marysville and Mrs. Laura Jackson of Wapato, (WA).

The course of Mary’s life beyond the death of Wesley is not known. Nor is the date of her passing and final resting place.