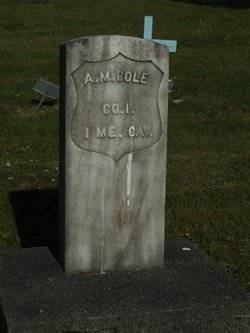 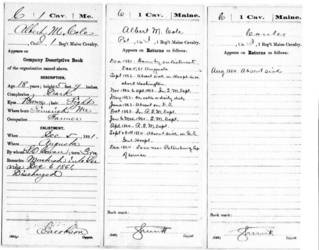 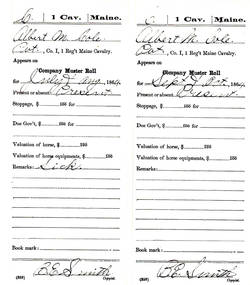 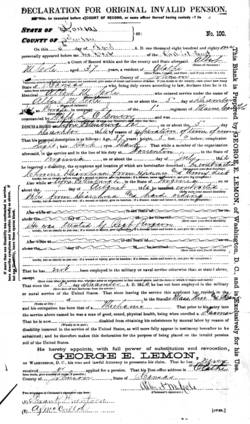 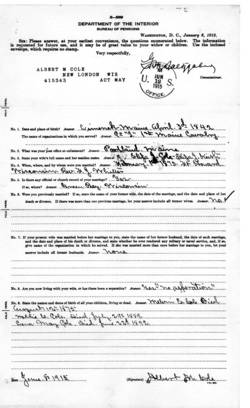 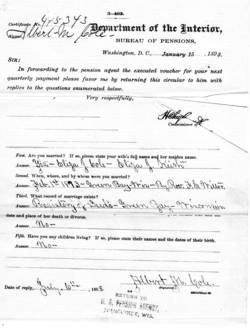 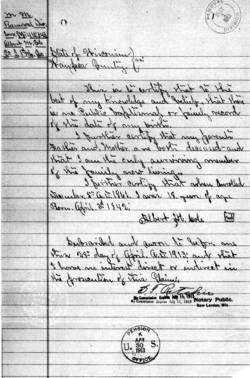 Recruits for the 1st, a three year "eastern theater" regiment were drawn from throughout the State Of Maine. On 11/5/61 they were mustered into Federal service at Augusta. The unit remained at that location until the following spring.

On 3/14/63 four companies of the regiment departed the state for Washington City, arriving there on the 19th.  Four more got there on the 24th. The final group of four arrived on the 28th. From Washington, five companies were subsequently sent to Strasburg, VA while the other seven soon ended up in Fredericksburg in that state.

Regimental components participated in their first severe engagement on 5/23/62 when they charged the enemy at Middletown, VA. The loss suffered by the 1st and two participating companies of the 1st Vermont Cavalry was 176 horses and equipment’s. The battle of Cedar Mtn. 8/9/1862 followed.

After participating in the 8/20 cavalry battle of Brandy Station and the battle of 2nd Bull Run/Manassas 8/28-30/1862 the 2nd participated in the retreat of Union Gen. John Pope's forces to Fairfax Court House where it arrived on 9/3. It then moved to Washington City and from there participated in the battles of South Mtn. 9/14/1862 and Antietam, 9/16-18/1862 MD. The regiment, except for three companies then remained at Frederick MD from mid-September up to early November it, having lost up to this point, nearly 700 horses either lost in action or worn out in service.  In addition to those actions noted above, the battles participated in by the 1st up until the end of 1862 and well into 1863 reads like a who's who of eastern theater actions.

In late February and into early March, 1864 elements of the 1st participated in Union Gen. Hugh Kilpatrick's cavalry raid to the very doorstep of Richmond, Va. The loss to the first in this maneuver as 93 men killed, wounded or missing and over 200 horses lost.

Early May found the 1st with Union Gen. Phil Sheridan's movements toward Richmond. In the 6/24 battle of Trevilian Station it lost 10 officers and 56 enlisted men. During August of that year its losses in killed, wounded and missing was 49 men and 75 horses. Total casualties of the 1st for the year up to that point were 295 officers and enlisted men.

In August, '64 several companies of the 1st D.C. Cavalry were transferred to the ranks of the 1st Maine. Shortly thereafter, in November, Maine troopers not reenlisting were mustered out while that those remaining in the service along with the D.C. horse soldiers participated in the closing battles of the war.

The U.S. censuses for 1850 and 1860 found the Coles still in York County, but residing in the community of Waterboro Center (hereafter Waterboro) rather than Limerick.  It was in Waterboro on 12/5/61 that 17.9 year old Albert, claiming he was eighteen years of age, enlisted in the U.S. Army for three years.  His unit was Co. "I" of the 1st Maine Cavalry. At enlistment his vital stats were: Height = 5'9"; Complexion = dark; Eyes = brown; Hair = light. His occupation was noted as "famer."

Military service records provide very little insight into Private Cole's military life during the first half of 1862. Even present/absent information is not available from January through April. Likely, however, he was present for duty just as he was in May and June.

Around July 15, while with Union Gen. George B. McClellan's forces during the Peninsula Campaign in Virginia, near the village of Warrenton Private Cole contracted chronic diarrhea and resulting piles (hemorrhoids). In later years he would note that the ailments were caused by exposure, his diet of army food and hard riding. The seriousness of the ailments landed him in the 2nd Division Cavalry hospital from the 15th of July until the 26th of August.

From available documentation it appears that when Private Cole returned to duty with his regiment he was assigned to the quartermaster department. [Note: The quartermaster controlled the vast range of material goods and army or, as in this case a regiment, needed to function either on garrison duty or in the field.] Rolls show him with the quartermaster off and on until the spring of 1864. Other notations during this period include performing extra daily duty and being absent on detached service.

In August, 1864 while the Army Of The Potomac was at Hancock Station near Petersburg, VA chronic diarrhea once again overtook Private Cole to a degree of seriousness that landed him in the regimental hospital anew. On this occasion the medical stay lasted into December. Records show he was returned to duty on the 4th. The following day he was entirely discharged from the service. Records differ as to whether that discharge was because of a disability or the expiration of his period of enlistment.

Returning to civilian life, Albert chose to settle in a boarding house in East Boston, MA. Within that community he hired on with a company called McKay and Alden where he began learning the machinist trade. He would remain in Massachusetts for four years until the company failed forcing him to move on. Still, he apparently learned enough while with the company that post war he would note his occupation as "mechanic."


Departing Massachusetts in late 1869 Albert moved westward to the community of New London located in Wisconsin's Waupaca County. Not documented is why he chose to move to that community and, as his name does not show up in the 1870 census, it is not known what type of work he was performing in that locale.

Circa 1874 the Coles departed Wisconsin and moved to the community of Olathe in Johnson County, Kansas. Again, why they moved to this location is not known.  It was there the census of 1880 found Albert involved in making furniture.

During this period of Kansas residence Albert began the paperwork to obtain a U.S. Government disability pension based on his days of Civil War soldiering. The basis for his claim was the two bouts of diarrhea suffered while on duty in Virginia years before. The diarrhea had continued to plague him every several weeks to a point where, since discharge, he had never been able to perform manual labor beyond the point of 1/2 wages. As such, he had been forced to try and earn a living by means other than laboring.

From Kansas the Coles moved back to Appleton, WI. This time they would reportedly remain in that community for fifteen years.

It was while in Appleton during  the early days of the 80's that Albert began receiving a $4 per month U.S. Government disability stipend based on continuing problems with chronic diarrhea, disease of the rectum and painful internal and external piles (hemorrhoids) which traced back to his days of Civil War soldiering. Such a stipend was subsequently granted in an initial amount of $4 retroactive to 4/13/81. That payment continued to rise until, at death, he was receiving $40 per month, over three times what his monthly pay had been as an army private.

Circa 1893 Albert and Eliza moved from the mid-west to Seattle, King County, Washington. Once more the exact why for the move is not known. However, by this time Albert's younger brother Brackett was residing in the Puget Sound area, so perhaps Brackett encouraged his older brother and wife to move west. The Coles would remain in Seattle - the 1900 U.S. census found them there with Albert's occupation noted as "tailor" - for twelve years.

By around 1904 it appears Albert and Eliza had moved from Seattle northeasterly to the small, Snohomish County community of Sultan. There he joined his brother and family also residing there.  Albert and Eliza would not abide long in Sultan as, the following year, 1905 they returned to New London, Wisc.

Here we move ahead to July 1, 1915. On that date Albert received a letter from the U.S. Pension Department which read - in part - as follows: It does not appear you are as old as you say. (Your) ages on pension applications are very conflicting. In fact, a number of them indicate you were born in 1844 or '45. On April 5, 1881 you gave your age as 37; 12/26/83 as 39; 6/28/89 as 44 and 3/17/03 as 57. The statements would make the year of your birth 1844 or '45 if you were born April 3r...... In the absence of any better evidence beyond military records which indicate you were 18 when you enlisted, we are accepting 4/3/43 as (your date of birth and) granting your pension accordingly. As Albert could not provide proof that he was born earlier as he claimed, the ruling stood. Still, as was previously noted, at death he was receiving a sizeable $40 per month pension.

After about twelve additional years in New London, Albert and Eliza returned west to Washington State and his brother's community of Sultan. This would prove to be their last move.

Eliza J. Cole died in Sultan, WA on 3/28/16. Details of her passing are not available. She was buried in the Sultan community cemetery,

On 7/23/18 and thereafter, Albert's health began to markedly fail necessitating constant, daily nursing care. That care was provided by his brother's widow Amy Cole and Amy's married daughter, Nellie (Cole) Ellis. Albert died in Nellie's Sultan home on 11/28/18. Burial was in the Sultan community cemetery with officiating by members of Seattle GA.R. Isaac Stevens Post #1 which Albert had joined when first in the northwest.

Over the next year and one half Albert's niece and her husband would try and recoup from the government and others, some of the monies they had spent caring for Albert before and after he died. To a limited degree they were successful in these pursuits.