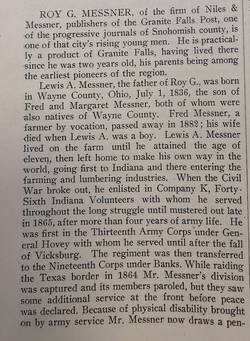 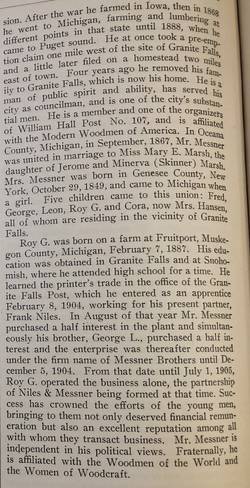 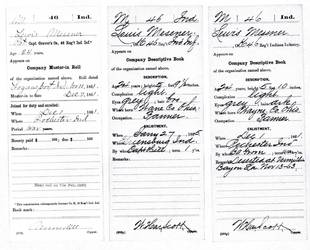 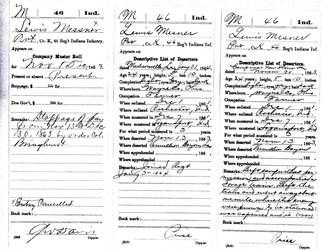 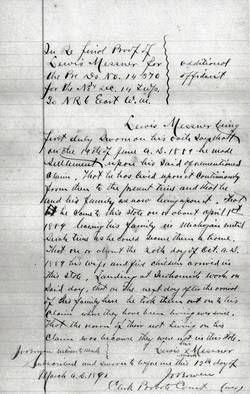 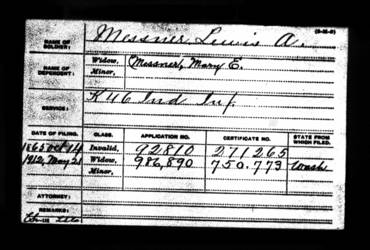 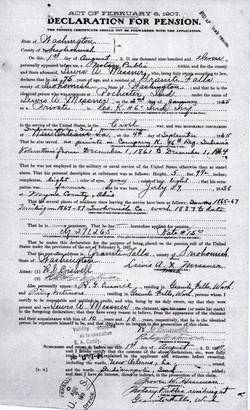 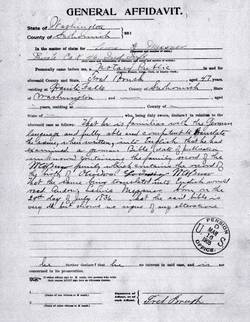 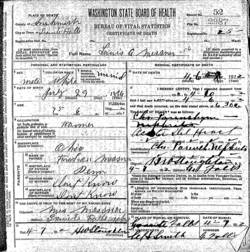 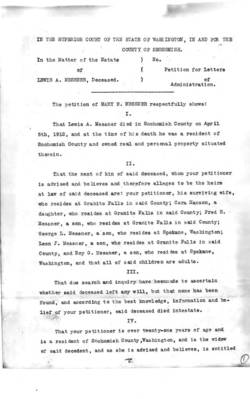 The 46th, a three year western theater regiment left Indiana as soon as it was mustered into Federal service. It's destination was Camp Wickliffe located between Leafdale and Buffalo), KY .Soon thereafter it marched to Paducah and then moved into Missouri.

In March, 1862 the regiment was involved in in the battle of New Madrid (Madrid Co., MO). It then started for Ft. Pillow, TN. Its flag was hoisted over the fort on June 5th. The following day Memphis, TN was occupied by Union forces. Action at St. Charles, AR preceded other movements in that state.

1863 opened with the 46th attacking Rebel positions at Devall's Bluff, AR. Participation in the Yazoo River expedition followed. As the forces of Union General U.S. Grant moved towards Vicksburg, MS, the 46th was in the principal part of the engagement at Port Gibson and in the advance brigade at Champion's Hill. There it lost one fourth of its engaged numbers. Forty four days in the trenches before Vicksburg came next, with the siege of Jackson beginning in July. By August the regiment was in New Orleans, LA. In Louisiana it participated in the Teche expedition. The year ended with the unit returning to New Orleans and re-enlisting as a veteran organization.

March, 1864 found the 46th participating in the Red River expedition and the battle for Mansfield, LA. The regiment was then engaged at Pleasant Hill and at Alexandria. It reached Morganza in late May and arrived back at New Orleans in June. From there veterans were furloughed home for thirty days.

Upon returning to the field the regiment was sent to Kentucky to resist a Rebel invasion. It was then in the expedition to Saltville after which it garrisoned Prestonsburg and Catlettsburg, KY. Stationing at Lexington completed the regimental term of service.

When Fredrick had come to America is not documented, but he married Helena/Helen on 3/29/34 in Baltimore Co., MD. By vocation Fredrick was a farmer.

Lewis was born in Ohio and his younger sister, Margaret in Maryland. The two births when coupled with the fact that in 1850 the Messner family was still in Wayne County, Ohio - in or near the community of Chester to be specific - is puzzling. Was Helena/Helen having difficulty with the birthing process, so travelled back to Maryland to be with family or friends when the blessed event occurred? We will likely never know the answer to that question.

In later years Lewis would claim that he had left the family home by the time he was eleven years of age. In reality, this appears to have not been the case as – in 1850 at aged 14 - he was still living under his father's roof. He was, however, absent from the household by 1860. When had he departed his father’s home?  Why had he departed and where had he gone? Again, we do not know. However, his father had remarried in 1852 and, by 1860, had quitted Ohio in favor of Missouri................Perhaps those developments contributed to Lewis’s departure.

In April, 1861 civil war swept across the United States. In the wake of this unfolding tragedy we next learn of Lewis. On 12/11/61, while residing in Argos, Indiana, he enlisted for three years in the U.S. Army. His unit of choice was Captain Grover's company which became Co. "K" of the 46th Indiana Volunteer Infantry. For enlisting Private Messner was eligible for at least a $100 enlistment bonus or "bounty" a portion of which was paid up front with the balance to come in increments.

At that time of his enlistment get a glimpse of Lewis Messner, the physical man. Private Messner was 25 years of age, 5' 9.5 or 10" tall, had a light complexion, gray eyes and dark hair. Occupationally he noted himself to be a "farmer."

While in the military Private Messner's surname would also appear as Mesner and Mossner. Speaking of names, here it is worthy of noting that when Lewis signed the enlistment paper he made "His X Mark." Based on available post – war documents containing Lewis’s "signature", he never did learn to sign his name. He was likely illiterate his entire life.

Private Messner's primary enemy while in the army seemed to be himself. He had a bad habit of being absent without leave (AWOL). This first occurred on 8/18/62 when it was noted that he was a loss to his unit because he had deserted from muster. It was next indicated that on 10/18 he had been returned to Helena, AR from desertion.

On 2/24/63 our private was again absent, but this time because he was sick in the hospital at Helena, AR. He was present for duty in March and on 4/10, but later that same month was listed as being "absent at Perkins Plantation Lenses Parish, LA." No additional details are available pertaining to this entry.

On 11/13/63 at Vermillion Bayou/Vermillionville, LA Private Messner, again, was listed as having deserted. The details of this incident are as follows:” He left camp without permission accompanying a forage train. He then left the train and went away about one mile where the enemy were known to be stationed and was captured.”

On 12/25/63 at a stagecoach station near New Iberia, LA Private Messner was paroled by the Rebels. He rejoined his regiment on 1/13/64.

During his awol/capture absence Private Messner's pay was stopped. Further, after returning to duty he was almost immediately detached from his unit to serve in the pioneer corps. (During this period military records contains a vague reference to him being transferred to 29th WI, but his name does not show up on the roster of that regiment). Pioneer troops were the construction forces of the U.S. Army during the American Civil War. Theirs was dangerous work as it was their job move ahead of the army to build roads, construct bridges, clear waterways, etc. so forces could move and maneuver. In Private Messner’s case, it is unclear whether or not this assignment was some sort of punishment for his AWOL transgressions.

Although his unauthorized absences ended, Private Messner continued to have his difficulties with army authority. Around mid-year of 1864 he was arrested and confined for having “entered Orleans Cotton prep. #1 and stolen 10 pounds of sugar.” On 9/25 a request was made to hold him in confinement. A written reply pertaining to the confinement   request indicated that he had been forwarded to the provost marshal and was no longer in custody. Also, during this period there are references to him having some connection to the 56th OH Infantry but, again, our private’s name does not show on the rolls of the 56th.

Despite his difficulties, on 12/1/64 Private Messner settled financial matters with Uncle Sam and was discharged from the service. He did not remain away long, however, as on 1/28/65 – then showing his place of residence to be in Franklin Co., OH -  he re-enlisted to serve one year in his old regiment and company.  Having re-enlisted, he was again eligible for a financial bounty. This enlistment appears to have gone smoothly and, with the war ended, Lewis exited the U.S. Army for the final time.

After leaving the army all that we initially know about Lewis's return to civilian life is that he settled somewhere in Iowa. From there, in 1867, he removed to Valparaiso, IN. The following year he quitted Indiana for Muskegon Co., MI.

Although no U.S. Census data is available for the Messners in 1870, during this period, within Michigan, the family seems to have resided in or near Grand Haven located in Ottawa Co.  Fruitport, Muskegon Co, however, appears most prevalently in terms of where the Messners resided during their Michigan years. They were farming there by 1879 and  apparently still at that location when,  on 4/1/89,  Lewis left his family and travelled westward to the wilds of the Puget Sound region of the Pacific Northwest to stake a homestead claim based on his days of Civil War soldiering.

What had drawn Lewis to this region is not documented. However, he established his claim near the community of Granite Falls located in Snohomish County then travelled southward to the Federal land office located in Seattle, King County, WA Terr. to pay the $200 fee ($1.25 per acre) on the 160 acre tract.

The filing having been made on 7/1/89, Lewis moved onto "his" property and began laying down the foundation of a house. Construction on the dwelling was begun in August and completed in October. On 10/21, his wife and children having "landed" the previous day in in nearby Snohomish City Snohomish Co, WA Terr., the Messner's moved into their newly constructed homestead domicile. According to filing papers, the dwelling was 16' x 20' in size, was comprised of two rooms, had two doors, two windows as well as “a good floor and roof.”

Other improvements on the homestead parcel included construction of an outbuilding, a well and a private road. Between 3/4 of an acre and three acres were cleared for crop plantings the following year and an additional 8 acres were slashed.

An interesting sidelight to the Messner homestead inventory are the notations that for tools Lewis had four rakes, one shovel and one hoe. In terms of furnishings for the house, he had 1 table, 4 chairs, a cooking stove and utensils, a cupboard with dishes and three beds with bedding.

Although the Federal Government land office did give Lewis some static about his family not residing on the property from day one, he pointed out that they were not in the territory/state until October of 1879 and after they arrived here they had resided on the land continuously. On 8/5/91 patenting (deeding) of the property was approved and on 11/23/91 the patent (deed) was granted to the Messners.

As early as 1862, Federal disability pensions had been granted to disabled Union veterans - generally those who had lost limbs during the War.  Later,  the pension system was opened to all honorably discharged vets and in 1879 a law was enacted allowing veterans claiming ailments or disabilities tracing back to their  soldiering days to seek a forward paying stipend as well as a lump sum payment retroactive to the time of the alleged disability in the service. This opened the floodgates of pension-seeking veterans including, later, Lewis Messner.

On 4/16/98 Lewis began the paper chase in search of this payout. His claim was that he suffered from rheumatism of the legs with resulting heart disease, but also suffered from an inguinal double hernia which he held into place with a truss. At some undocumented point a pension of $4 per month was granted. By 4/3/84 it had increased to $8 and later grew to $10. From there it increased to $12, then $15 and finally, on 8/2/11, $20 per month.

Almost immediately following her husband's passing Mary petitioned the U.S. Government to continue receiving at least a portion of Lewis' monthly pension. Strangely, available documentation does not address whether or not her request was granted. Likely, however, it was.

Mary died in Everett, Snohomish County, WA on 12/10/18. She was/is buried beside Lewis in Granite Falls.

* The biographical profile which follows reflects two enlistments in the same regiment and company. The information is presented in this manner because, unlike most soldiers who re-enlisted while in the service, thereby making their tenure one continuous flow, Lewis Messner actually left the military and, after a period time had elapsed, re-enrolled.