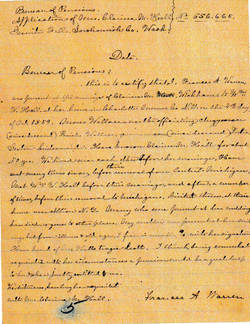 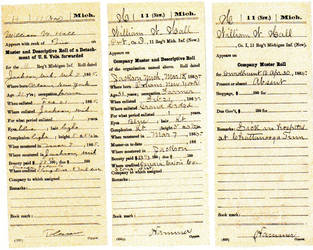 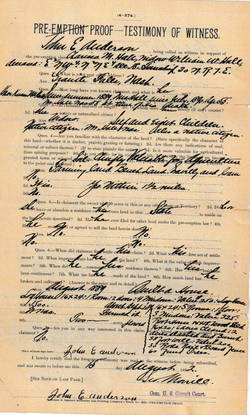 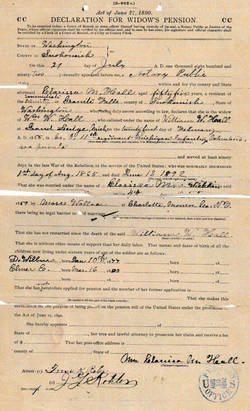 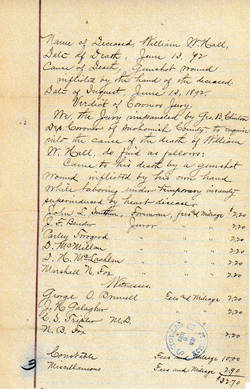 Organization of the original 11th Michigan Infantry, a three year, western theater regiment, was completed in September, 1861. Leaving the state, the unit proceeded to combat assignments in some of the most hotly contested battles in the southeast. In September, 1864, its period of service having ended, the 11th was pulled from its position before Atlanta, GA and returned to Michigan for final muster.

During the latter months of 1864 and early, '65 a new 11th - also a three year western regiment - was organized. When it returned to Nashville, TN in April, 1865 it was joined by re-enlisted veterans and new recruits from the original regiment.

From Nashville the new 11th moved to Chattanooga. A portion of the regiment was then sent into eastern Tennessee to guard the Chattanooga and Knoxville Railroad. The remainder of the unit was stationed at Cleveland.

After two months, the War having ended, the 11th was ordered to Knoxville where it remained until August. From that location it then proceeded to Nashville where it was mustered out of existence.

William Wallace Hall was born during the year 1831 in Barre Orleans Co., NY.   No birth date or month has been located within available documentation.

Freelove was Briggs Hall's second wife. His first was Hanna Finch. Hanna was born in 1787 and died in 1822.

Pre - American Civil War the next we learn about William is that on 10//4/59 in Charlotte Monroe Co., NY he married. His bride was Clarissa Mehitabal Cagwin (b.5/1/37 NY).William, who was born and raised in Orleans County, NY lived near an uncle of Clarissa, so the two had known each other since childhood. After marriage the two set up house on William's parents Barre, Orleans Co., NY farm.

According to available documents, sometime in 1863 William moved his family from New York to a farm located near Grand Ledge in Eaton Co., MI.  However, because the twins were born in Michigan it is obvious that the move was made much earlier, likely not long after the 1860 U.S. census which found the Halls in Orleans Barre, New York.

In April, 1861 civil war swept across American. So began four years of bloody fighting. William did not choose to become a part of the war machine until the conflict was almost at its end.

On 2/21/65 William enlisted in the U.S. Army for one year. Perhaps the enlistment was spurred by the availability of an enrollment bonus or "bounty" which, in the case of Private Hall, amounted to $100, one third of which was generally paid up front with the balance to come in additional increments of $33. 33. In the mid-1860s $100 could be considered a great deal of money.

At the time of his enlistment we get our first look at farmer Hall the physical man. He was 5'5" tall, had blue eyes, light hair and a light complexion. Somewhere along the way someone described him as a "delicate man of small size."

During his time in the service Private Hall's worst enemy proved not to be Johnny Reb, but illness. Having joined his unit as a new recruit on 4/10/65, by 4/30 he was absent, sick in a hospital in Chattanooga, TN with chronic diarrhea. By 7/9 he had been transferred to another hospital in Detroit, MI. From there he was mustered out and sent home. Likely Private Hall had never fired a shot in anger.................(Note: Although sent home from Detroit, MI in August, Private Hall was not dropped from his unit's records in Nashville, TN until 9/16.)

Army life and hospitals behind him, William returned to MI to grow his farm crops and his family. Post war it appears the Halls were residing in Oneida Co. If that were the case, when and why a move had been made from Eaton Co.to Oneida Co.  is not known.

The Halls remained in Oneida Co.  until sometime between the spring of 1881 and that of 1883 when they again moved inside Michigan from Oneida Co. to approximately 2.5 miles outside of the community of Wexford located in the county of the same name. The move appears to have been prompted by the acquisition of a 160 acre homestead William was able to acquire because of his Civil War soldiering.

During the years following the Wexford move William would pay for half of the homestead land. There was still money owing on the parcel when, in August, 1889 he appears to have perhaps rented out this property and preemptively acquired another 160 acre homestead parcel located 1.5 miles outside the Snohomish County community of Granite Falls in Washington Territory. How this parcel far from Michigan was discovered and acquired is not documented.

As best as can be determined William, alone, apparently first moved to and onto the Washington property. He may then have been joined by his wife and children in June or 1890. This cannot be corroborated by census data as most of the census for that decade was destroyed by a Washington, D.C. fire.

The prospects for a new, productive life in Washington did not pan out for the Halls. Although it is not exactly clear what happened, it appears some kind of dispute arose over a Monte Cristo Railroad right of way which looked like it would possibly pass through William's homestead. Always physically delicate and never a well man since his months in the army William apparently began to worry about losing the land. Suffering from heart problems and the inability to sleep, he became temporarily insane or "deranged". As a result, on 6/13/92 William committed suicide using a firearm.

Life did not become any easier for Clarissa following William's death. She did, however, begin the paperwork process to try and obtain a widow's pension based on her late husband's days of Civil War soldiering. (There is no indication that William ever sought a pension for himself.) Further, in order to get some money she sold 80 acres of timber out of her 160 homestead acres to the Blackman Brothers who had property next to hers where they thought the Monte Cristo Railroad depot would be sited. It was not. The Blackmans, who owned a lumber mill in Snohomish, Snohomish Co., WA were not supposed to log the land until they had paid for it, but reportedly secretly did so anyway. Clarissa threatened legal action which resulted o 5/3/84 in her recovering the deed to the property post-dated to 11/19/92.

Community consensus regarding the widow Hall was that she was very poor. This prompted two of her youngest sons to remain at home with her until she died.

In 1900 Clarissa was still residing in Granite Falls. The home in which she was living was that of Fred P. Anderson and his wife Minnie (Hall) and their two children. The fact that also under the Anderson's roof were Charles W. and Elmer E. Hall - Minnie's brothers and Clarissa's youngest sons - lends credence to the likelihood that the home was William's and Clarissa's homestead.

Clarissa died in Granite Falls on 12/20/12. While it has not been documented, she was likely buried there beside William. She was survived by her children D.W., Charles W., Minnie L. Cora E., Flora A., Alice M. and Ulysses G.