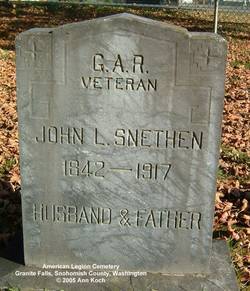 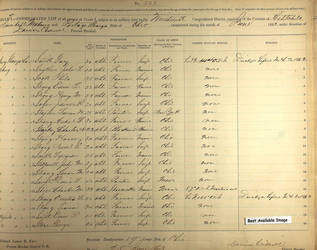 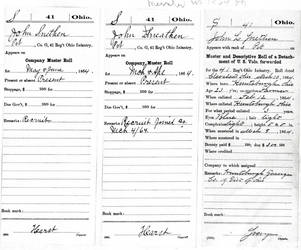 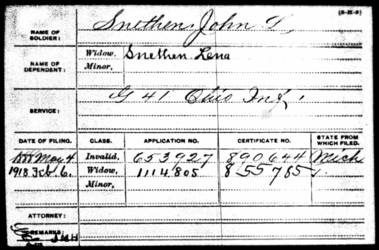 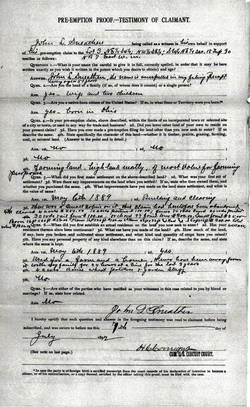 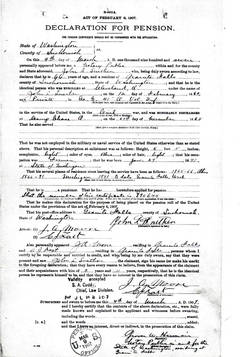 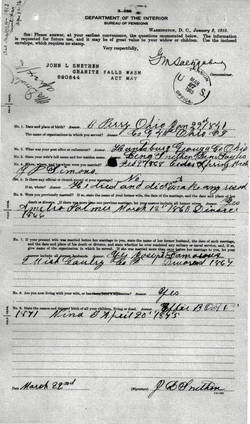 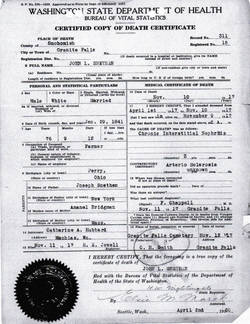 The 41st was a three year western theater regiment. At the end of its term of service original members, except re-enlisted veterans, were mustered out. The 41st then composed of veterans and recruits, remained in service until 11/27/65.

At the close of the fight at Orchard Knob and at Missionary Ridge regimental losses were severe. 115 men had fallen.

At Rocky Face ridge the regiment - then reduced to battalion size - held steady under a galling fire. At Resaca, GA the 41st gained the crest of a ridge within seventy five yards of the main Rebel line and effectively eliminated his use of artillery.

Although birth years abound for John L. Snethen, he was likely born on 1/29/41. The location of that birth is noted as Perry Geauga Co. Ohio That being said, in later years John would claim to having been birthed in Michigan.

John's father, Joseph Snethen, was said to have been born in New York State. Birth years for Joseph vary from 1772 to around 1809.


On 3/18/63 in Geauga Co., OH John L married. His bride was Amelia Palmer (b. unk.). Although the community in which the two were wed is not named, after their marriage John and Amelia set up their household in Huntsburg.

For what- ever reason - but, likely money - on 2/12/64 John left his Huntsburg home to enlist in the U.S. Army. His unit of service was Company "G" of the 41st Ohio Infantry. For enlisting he was granted a $300 bonus or "bounty", a portion of which was paid up front with the balance to be disbursed incrementally. In 1864 $300 was a tidy sum of cash!!

At the time of his enlistment we get our first look at John Snethen - while in the military his surname would also appear as Sneithen - the physical man. He was 5'5" tall, had blue eyes, a light complexion and light hair. Occupationally he was noted as being a "farmer."

For our Private Snethen the worst enemy he faced while in the military was not Johnny Reb, but sickness. On 3/4/64 almost immediately after joining his company and regiment at Strawberry Plains, TN John contracted the measles. This resulted his first being admitted to Asylum Gen. Hospital located in Knoxville, TN. Transfer to a hospital in Chattanooga, TN appears to have preceded his return to duty.

Having returned to duty, within four miles of Atlanta, GA our private was stricken with dysentery and typhoid fever. A hospital stay in Georgia followed. He then was hospitalized in Chattanooga, TN - again - for a period of four months. Time in another Chattanooga hospital for rheumatism and at a convalescent camp preceded his again being returned to the field on 12/5/64.

In March/April, 1865, The War ground towards an end. After being stationed in Huntsville, AL the 41st was transferred to Texas when chronic rheumatism in his right thigh resulted in our private being assigned to light duty guarding the home of a widow with the last name Woodard.

Returning to Camp Chase in Ohio Private John Snethen was mustered out of Uncle Sam's service on 11/27/65. The only notes of significance in this separation is that he retained his rifle and accoutrements for which he paid the government $27.23.

Back home in Ohio all did not go well for John and Amelia. Around May, 1866 John appears to have left both his wife and Huntsburg and moved to Cedar Springs Solon Kent Co., MI. While John was there, on 6/5/67 back in Geauga County, OH, Amelia was granted a divorce on the grounds her husband had been absent from home for more than three years. Perhaps more than patriotism or bounty monies had promoted John's entrance into the service.............According to available documentation, to settle the divorce John had to pay $100 alimony - whether or not this was a one- time payment is not known - and court costs.

The census for 1870 found John, Lena and Stella in Cedar Springs. At that time John listed his occupation as "engineer." The meaning of this designation is not documented.

While John purportedly remained in Cedar Springs for eight years after his arrival there in 1866, he and Lena's first child - daughter Effie - was reportedly born in Grand Rapids, MI. Grand Rapids is located in Kent County. How this anomaly fits into the grand scheme of our story is not documentally clear.

Now, having been separated from the military for ten years, former Private Snethen found he could only do half the work of a healthy man and his disabilities were getting worse.  An inflamed left kidney affliction would sometimes prostrate him for days at a time.

The whereabouts of John Snethen and family from the mid-1870s through the mid '80s is not known. They cannot be located in the 1880 census.

The next we learn of John comes from May, 1888 when, in Newago Co., MI, while working in a rock quarry a crowbar slipped. This resulted in the dislocation of his right elbow which had suffered a similar fate when he was thirteen years of age. As a result of his reinjuring the elbow before long he was unable to straighten his right arm. This appears to have been the spark which, in October, 1888, spurred John to begin the paperwork process obtain a U.S. Government disability pension based on physical debilities and ailments which supposedly traced back to his days of Civil War soldiering.

According to John's telling, he and his family left Michigan in 1891 and moved to the community of Granite Falls located in Snohomish Co., WA. Although there is no U.S. Census data for 1890 because most of it was destroyed in a fire, available documentation places the Snethens in Sherman Wexford Co., MI in March, 1889 and in Granite Falls, Snohomish Co., WA Terr. by  May 6th of the same year.

Exactly why the Snethens departed Michigan for Washington is not clear, but perhaps it was land. On 5/6/89 they moved on to an abandoned 159.89 acre homestead tract. Using his Civil War service record John was able to obtain the tract for $1.25 per acre.

Non-construction improvements to the property began with five acres being cleared for the planting of small fruit trees. Potatoes and other garden stock was planted. The Snethens were to receive the deed (patent) to the homestead property on 5/19/94.

With all of the above happening, in 1891, while splitting wood, John cut his right foot with his axe. The wound did not heal properly which left him with exposed, misshapen bones that were cold sensitive. The foot could only be shod by the wearing a piece of foot wear two times his regular size.

While not Civil War-related, on 6/15/92 the foot injury coupled with the earlier arm accident, resulted in John being pensioned at the rate of $6 per month. Based on available documentation, although John later sought pension increases based on actual service-related ailments - some of which were supported by former soldier and Granite Falls neighbor, Napoleon B. Fox (14th NY Light Artillery Co. "C". Buried American Legion Cemetery, Granite Falls, WA) - but, all such requests were rejected..........

The 1900 U.S. Census noted John's occupation as "day laborer." A decade later, in 1910 he was cited as being in the real estate business. Under the Snethen roof at the time of the latter tally was widowed or divorced daughter, Effie, and her two children as well as married daughter Nina M., her husband and their two children.

John Snethen died at six o'clock in the morning on 11/10/17. At the time of his passing he was aged 76 years, 10 months and 9 days). Cause of death was listed as chronic nephritis (kidney disease) with arteriosclerosis (hardening of the arteries) contributing. Burial
was on 11/12/17 in the Granite Falls Cemetery.

After John's death Lena applied for and, on 2/6/18, was granted a U.S. Government widow's pension. The initial granting of $25 per month was later increased to $30. In August of 1926 she attempted to add to the stipend by requesting additional funds based on her first husband's service, but that request was denied. On 4/2/30 she also petitioned the U.S. Government for recoupment of John's burial expenses. The outcome of that attempt is not known.

Lena remained in Granite Falls for the remainder of her days - which were many. In 1920 she was in the home of remarried daughter Effie, her family and others. In 1930 she was with one of her married granddaughters.

On 9/2/32 while residing with her eldest daughter, Stella, Lena became ill to the degree that she needed care - including nursing - night and day. She died on 12/27/32 at the age of ninety. Cause of death was listed as "old age and general wearing out of the system." Lena was/is buried in Granite Falls beside John.

In the spring of 1933 in an apparent attempt to obtain more government funds, Stella wrote a letter to the U.S. pension office in which stated that her late mother should have had more of a pension - at least $35 per month. The basis for this was that - if she would have lived three days longer - she would have been eligible for a pension of $40 per month. No response to this letter is documented.