Robert B. A. Hubbard 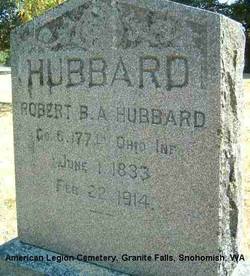 Robert B Hubbard marriage to Catherine A Snethen 1863 OH 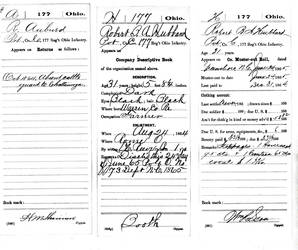 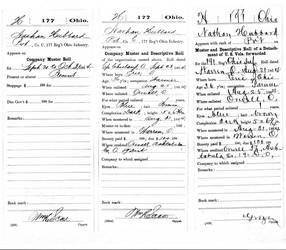 Nathan Hubbard brother of Robert B military muster in 1864 OH 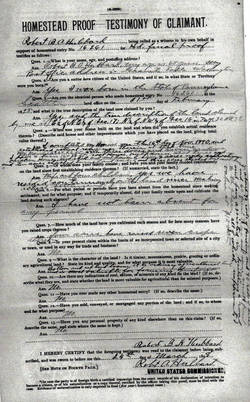 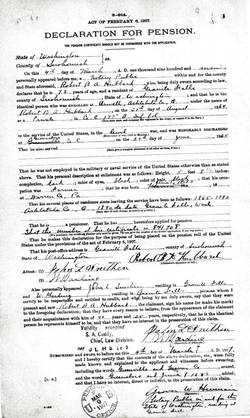 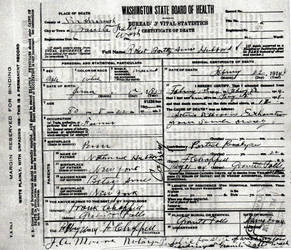 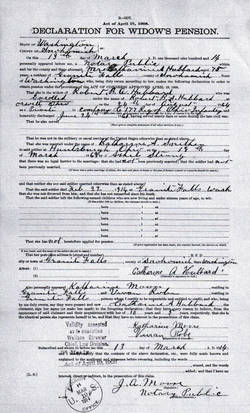 The 177th Ohio was a one year, western theater regiment. Although a late - war three digit unit, it was to see more combat action than most short term organizations.

Immediately after Federal muster the177th left Ohio and proceeded to Nashville, TN. The day after arriving in Nashville, however, it was ordered to Tullahoma to perform garrison duty. From there, on 12/7 it moved to Murfreesboro where it participated in a charge on the enemy's fortifications which resulted in the capture of two pieces of artillery and over 200 prisoners. A short time later a skirmish with the Rebels saw several men of the regiment wounded.

About mid-January, 1865, after Confederate forces had been driven from Tennessee, the 177th was ordered to Clifton. Embarking from that location, the unit proceeded down the Tennessee River and up the Ohio to Cincinnati. From there it took a train to Washington, D.C. It then moved to Annapolis, MD where it again took to the water to reach Wilmington, North Carolina.

Arriving at Ft. Fisher on 2/7/65 it took part in two attacks on the enemy works which caused the Rebels to abandon nearby Ft. Anderson. It next engaged the enemy at Town Creek.

The 177th then joined Union Gen. W.T. Sherman's army at Goldsboro, NC. With the surrender of Confederate forces under General Johston, the regiment was sent to Greensboro, NC where it was mustered out of existence.

Robert Bartley Ames Hubbard was born 6/1/33 in Warren County, Pennsylvania. His parents were Nathaniel (b. 1790 NY) and Betsey (nee Ames b. 1795 NY) Hubbard. In the 1850 U.S. Census for Colebrook Ashtabula County, OH Nathanial listed his occupation as "chair maker."

Based on available information Robert was the youngest of three Hubbard children. His older siblings were Nathan (b. 1828 NY) and Lucy (b. 1831 NY).

As noted by the birth states of the two oldest Hubbard children, at some point in time between the birth of Lucy and that of Robert the Hubbards quitted New York in favor of Pennsylvania. What had prompted that inter-state move is not documented. Also not documented is the why for the move from Pennsylvania to Ohio where the family was residing by 1850.

After marrying Robert and Catherine took up farming in Ohio where their first child - son Charles Ernest - was born on June 9th of the following year. The Hubbards would produce four children all of whom survived into adulthood. In addition to Charles, the other three children were: Flora Amanda (b. 1867), Lena B (b. 4/12/74) and Aurelia/Orilla May (b. 1877/'78)

A little less than ten weeks after the birth of Charles, Robert left his wife and baby and joined the U.S. Army. Likely the move was at least partially prompted by the fact that the enlistment would be for only year in a newly formed regiment that likely would not be exposed to combat situations. Beyond that, there were financial enlistment incentives including a $100 enlistment bonus or "bounty" one third of which was generally paid up front with the balance to come in two additional increments. In 1863 one hundred dollars was considered a goodly sum of money.

Interestingly, Robert’s enlistment papers show him enrolling in and being mustered into the 191st Ohio Infantry. However, as we know, his service was in the 177th. A search of the personnel roster of the 191st, does not show Private Hubbard’s name, so the reason for this regimental change is somewhat of a mystery.

Upon the occasion of his army enlistment we gain our first glimpse of Robert Hubbard the physical man. He was noted as being five feet eight and one quarter inches in height, had black eyes, black hair and a dark complexion. As previously indicated, his occupation was "farmer."

Although Private Hubbard's infantry regiment - the 177th Ohio - was to experience more combat exposure than most short-term organizations of the era, Robert weathered his period of enlistment without being wounded or taken seriously ill. The only note of significance during his army tenure was that on 10/18/64 he was "absent on cattle guard to Chattanooga (TN)."

On 6/24/65, in Greensboro, NC Private Hubbard was mustered out of Uncle Sam's military service. This entailed settling clothing and financial accounts. As for the former, it had not previously been settled and $58.82 had been advanced for clothing in kind or money. Also due the U.S. "for arms" was $6. This likely signifies that with the War having ended, Robert was able to purchase and take home his rifled musket. Also noted was that Private Hubbard was still owed thirty three and one third dollars of his enlistment bounty, but that  the government was due ninety five cents for a (lost) haversack and sixty five cents for a canteen. When all the financial transactions were completed, it appears the former Private Hubbard went home with money in his pocket.

Available documents are not clear on where "home" was to the Hubbard family after the War. If Lewis did return to Ohio, he did not remain there long. One source indicates daughter Flora Amanda, born in 1867. was birthed in Ohio. Another indicates Michigan was her birth state.

In later years Robert would claim to have resided in Ashtabula Co., OH from the time he got out of the army until 1890 when he came to the Pacific Northwest. Contradicting that statement is the preceding birth state information pertaining to daughter Flora. Beyond that, in 1870 the Hubbard family was censused in the Cedar Springs Kent Co., MI farm home of Catherine's parents, Joseph and Sarah Snethen. Finally, a decade later - in 1880 - they were still in Kent County with Robert heading up a household which still included Catherine's father, Joseph. Where they may have resided during the intervening years of the '70s is unclear.  We have no birth state for daughter Lena (b. 1874) and for Aurelia/Orilla May (1877/'78) Ohio is listed..........

There is no census data pertaining to the Hubbards in 1890 as most of that tally was destroyed by fire. It is documented, however, that in the spring of 1890 Robert left his family and travelled to the Puget Sound region of the Pacific Northwest where he drew upon his period of military service to settle on a 160 acre homestead claim near the community of Granite Falls located in Snohomish County. What had drawn him to this remote wilderness area is not known.

Arriving in Granite Falls, it appears Robert's first order of business was to construct a house so that Catherine and their four children could join him. The house he constructed was 24 x 29 feet in size and featured three doors and seven windows. The entire Hubbard family occupied the dwelling on 11/16/90. On 8/31/98 their "patent" (deed) to the property was approved. It was granted on 9/28/98.

Dropping back a bit, while Robert was establishing his homestead, he was also working on obtaining a U.S. Government disability pension based on injuries or ailments which he traced back to his days of Civil War soldiering. The paperwork process was initiated during December, 1891 and was based on rheumatism, a dry, bronchial cough and deafness in both ears. At some point during 1892 a $12 per month stipend was granted retroactive to 12/14/91.

As a side note, on 7/23/92 Robert, noting himself to be a "rancher" applied to the U.S. Government for patent/deed on a timber parcel near Granite Falls. According to filed documents, the tract contained one million to 1.4 million board feet of lumber worth about $1000. The application process went somewhat sideways because of a wrong name being posted in conjunction with one of his witness affidavits, but finally, on 5/12/05 Robert was granted ownership of the land. What he ultimately did with it, however, is not documented.

Robert Barkley Ames Hubbard died in Granite Falls, Snohomish Co., WA on 5/22/14. According to the physician who treated him from 2/1/14 to the day of his passing, the cause of death was "arteriosclerosis and exhaustion from senile decay with partial paralysis contributing." Robert was 80 years, 8 months and 2 days old. Burial was/is in the Granite Falls Cemetery.

Almost immediately after her husband's passing Catherine petitioned the U.S. Government to obtain at least a portion of her late husband's military pension. To what amount Robert's monthly stipend had grown to at the time of his death has not been found in available documents, but on 3/19/14 Catherine was granted $12 per month which, on 9/8/16, was increased to $20 per month. Beyond that date her monthly pension intake is not known.

In 1920 Catherine was still in Snohomish County, but by then residing in the Machias home of married daughter, Aurilia/Orilla May and family. How long she remained in Machias is not known, but when she died on 1/13/25 at the age of 87.3 years she was once again in Granite Falls. She was/is buried in that community's cemetery beside Robert.

One final notation concerning Robert Hubbard and his family: On 2/26/31 Aurilia/Orilla May requested the U.S. Government reimburse the family for burial expenses incurred in conjunction with her father's passing in 1914. The request was denied on the grounds that the old soldier had died prior to 4/26/28 which such reimbursements were first allowed.

*During the American Civil War Catherine's brother, John Snethen, served in the 41st Ohio Infantry Co. "G". He survived the War and in 1891 moved to the Pacific Northwest settling in the Snohomish County Community of Granite Falls. He died there on 11/10/17 and was/is buried in the Granite Falls Cemetery.