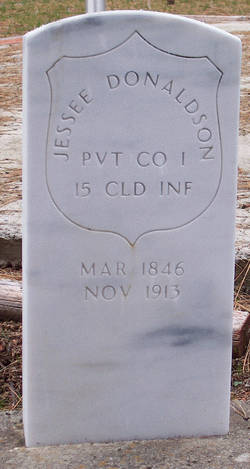 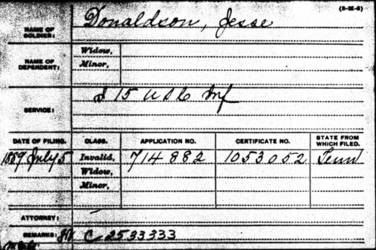 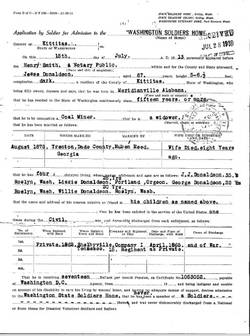 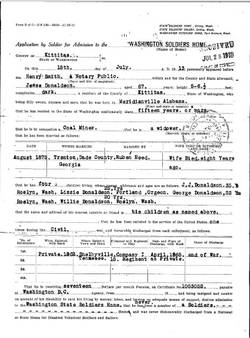 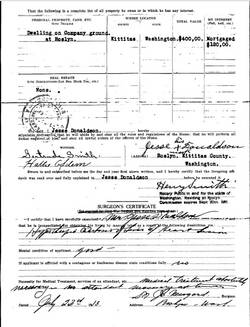 Burial date 11 June 1904 in lot 12. Cemetery Lot owner is listed as Jesse Donaldson. There are presently no visible markers for lots 10, 11 and 12. Anna is buried in an older section of the cemetery near the large Rucker Tomb, which was a popular party spot, and many markers near the tomb were destroyed. Anna's grave is in between two existing markers in Lots 9 and 13 and easily found.

Anna E. "Lizzie" Smalley married Jesse Donaldson around 1870. He was born in Alabama in January of 1846. An escaped slave, Jesse enlisted in the Civil War at the age of 18, as a Private, with the 15th US Inf in Alabama.

After the War, Jesse and Anna resided in Alabama, Tennessee and Georgia, where Jesse worked as a coal miner.

The family left Georgia and went West. By 1885, they reside in Roslyn, Washington where Jessee continued to work in the coal mines. In 1886 many of the coal miners were on strike, and men were recruited from the the eastern states to work in Roslyn. Jesse remained in Roslyn and continued as a coal miner.

Between 1880 and 1900, Anna and Jesse lost three children to disease. Two of the children may be Samuel, born 1879 in Tenn, and Hattie, born 1877 in Tenn. Anna contracted tuberculosis by 1904, and left Roslyn for treatment in Everett, Snohomish County, Washington. She died in Everett in June of 1904. Anna was buried in the Evergreen Cemetery in Everett in block 15. Jesse remained in Roslyn with their children and died in 1913. Jesse and Anna had at least ten children. Some of them are: Hattie, Samuel, Thad, Lizzie, George, General, and William.

A 2012 article in the Seattle Times, mentions Roslyn cemeteries containing old and notable graves, such as that of Jesse Donaldson, one of many miners buried in the Roslyn cemetery. In early life, Jesse was an escaped slave who went on to fight in the Civil War.

Of the children, son Thad Donaldson, born in March of 1881, died in Roslyn, Kittitas Co. Washington, at the age of 25 on 31 May 1902. He was a coal miner. Death return #116 lists father as Jessie, and mother as Annie Smalley. Cause of death was Phthisis (Tuberculosis).

Son George (1890-1964) settled in Renton and is buried in the Greenwood Cemetery. Memorial #72561970. His son George (1924-2012) served in WWII in the Army, and participated in the invasion at Normandy on Omaha Beach. He also fought in the Battle of the Bulge with the 291st combat engineers.

Daughter Lizzie, born March 1888, married Frank Bridgewater and they resided in Seattle. Lizzie died at the age of 32 on 02 Jan 1920.