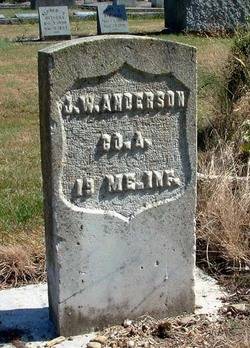 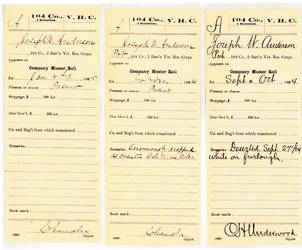 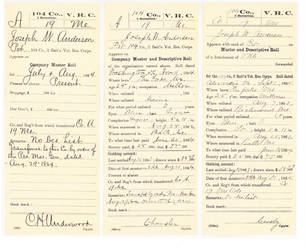 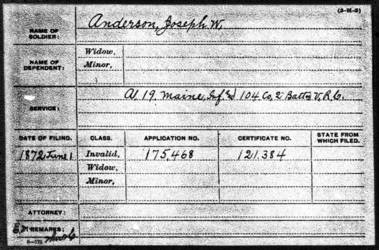 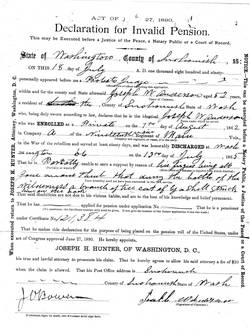 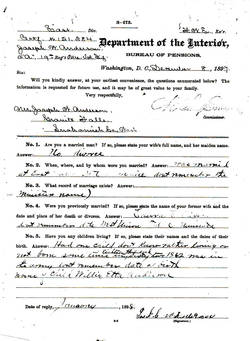 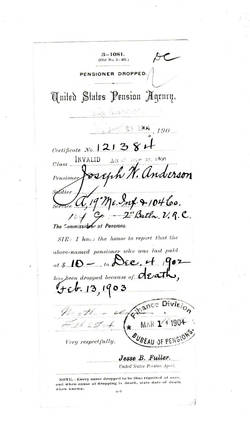 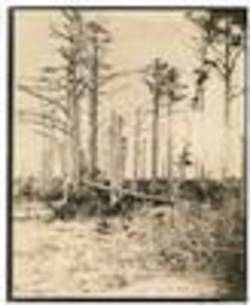 A large number of the men in this three- year regiment came from the mid-state, coastal and near coastal counties of Sagadohoc, Waldo, Know, and Kennebec. During Pvt. Anderson’s tenure the 19th saw an unusual amount of active service.

In addition to innumerable skirmishes, it was engaged in the battles of Fredricksburg, VA, Chancellorsville,VA, Gettysburg, PA, Virginia’s Wilderness (where its losses were severe along the Jerusalem Rd.) and Petersburg, also in Virginia.  At PETERSBURG the unit was, night and day, exposed to artillery and sharpshooter fire.

Although no specific information has been located pertaining to the 2nd Battalion V.R.C. beyond founding and final muster dates, in general the formation of a military organization utilizing wounded or otherwise disabled Union soldiers for non-combat, light duty assignments was authorized in April, 1863. Initially called the Invalid Corps (I.C.), in March, 1864 the organizational name was changed to the Veterans Reserve Corps (V.R.C.).

Men serving in the VRC were organized into two battalions. The lst was manned y those whose disabilities were comparatively slight and still able to handle a musket and do some marching. The 2nd was made up of men whose disabilities were more serious, who had perhaps lost limbs or suffered some other grave injury. There were twice as many  men in the 1st Battalion than in the 2nd with those in the latter being commonly employed as cooks, nurses or guards in public buildings.

ED. NOTE:  The original birth-to-death biographical profile on Joseph Willard Anderson was written during the early years of the Civil War Veterans Buried  In Washington State project. As such, it suffered from size limitations and a lack of research sources which could be drawn upon for its creation. The profile which follows was begun in June, 2018 and completed in January, 2019. While it features much more detail than the original, it still lacks input from documents stored in the National Archives in Washington, D.C.

Willard’s parents were John (b. 1815 ME and Elizabeth “Betsy”(nee Goodrich b. 1819 ME). During the 1850  U.S. Census for The Forks Somerset County, Maine John defined his occupation as “laborer. A decade later in Richmond, Sagadahoc, Maine he was employed as a “millman.”

On 8/7/62 Willard enlisted in the U.S. army infantry. His regiment was the 19th Maine.  At enlistment the 25 year old’s physical characteristics were noted as follows: 5’ 11” in height, light complexion, blue eyes and light hair. His occupation was listed as “millman.” While in the service he would be known as Joseph W. Anderson.

While with the 19th Joseph participated in the battles of Fredricksburg, VA (12/11 – 15/62), Chancellorsville, VA (4/30 – 5/6/63), Gettysburg, PA (7/1 – 3/63) and Virginia’s Wilderness (5/5 – 7/64). He passed through these conflagrations without injury, but during the initial Federal assaults upon PETERSBURG, VA  (6/15 and 16/64) received a gunshot flesh wound to his left thigh and lost the first joint of both his index and middle fingers on his left hand. Although not life threatening, his injuries they were serious enough that, August, 1864, he transferred to the Veteran’s Reserve Corps, a branch of the service created to make suitable military/semi-military use of soldiers rendered unfit for active field service due to wounds or disease.

As best as can be determined, following his muster into the V.R.C Private Anderson was furloughed home from the lst Division General Hospital in Alexandria, VA to recuperate from his wounds. On 10/31 during his “proper” absence he was erroneously reported as having deserted. Upon his return to the hospital, the clerical error was promptly corrected. That being done, it appears Private Anderson spent remainder of his time in Alexandria, VA, perhaps at one of the hospitals located there.

Where Willard settled following his exiting the service is not known, but likely it was in Lewiston, ME as this was his “desired address” as noted on his discharge paperwork. Further, his whereabouts are not chronicled in the census of 1870.

By 1880 John and Betsy Anderson had quitted Maine in favor of Wisconsin where they were residing in or near the Martinetee County community of Peshtigo where John was employed as a “lumber jobber.”  Also in the home was married son Charles and his wife plus unmarried son Willard. Willard’s occupation at the time was listed as “laborer.”

It appears Willard’s father moved from  Wisconsin to Snohomish County, Washington Territory in 1883. Making the move with their parents were sons, Willard, Charles, Benjamin, Columbus, John and Fred. The family was the first to locate in Granite Falls.  The unmarried Willard later settled in Snohomish City where he was involved in the logging industry.

The Granite Falls U.S. Census for 1900  noted Joseph Willard residing in the town. Interestingly, the census entry  also indicated he was a widower. There is some hint that along his life’s journey he had married a woman identified only as “Laura” and that he had fathered a daughter named Willie Etta. No hard documentation has been found pertaining to either this wife or daughter.

Willard died 12/2/03 in Granite Falls, Snohomish County, Washington following a short illness. At the time of his death, he was just shy of his sixty fourth birthday. At his passing he e was described as “a well know and popular citizen.”   Burial was not in Granite Falls, but in the Grand Army Of The Republic Cemetery in Snohomish, Snohomish County, Washington. At the time Willard’s youngest brother, Fred, was Mayor of Snohomish.