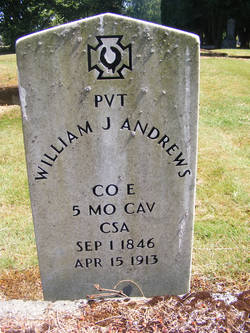 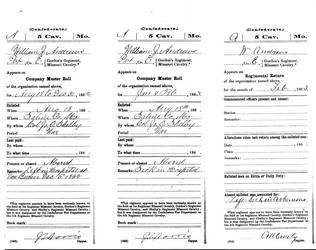 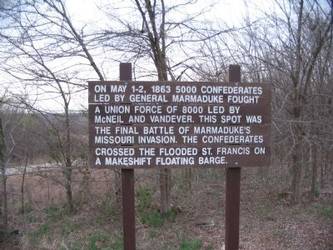 ED. NOTE:  The original birth-to-death biographical profile on William J. Andrews was written during the early days of the Civil War Veterans Buried In Washington State project. As such, it suffered from many limitations including size – original bios were displayed on 17” x 24” placards – and research resources.

The profile which follows was created in June, 2018. Although it features many more details than its predecessor, it still suffers from the depth of detail that can be gleaned from documents pertaining to Confederate veterans that, at time, can be found in the National Archives in Washington, D.C.

William Joseph Andrews was born September 1, 1846 in Chanton, Howard County,   Missouri. His parents were John (b. 1795 NC) and Sarah Sally (nee Beatty b. 8/1//05 Clay, TN). The Andrews family likely owned a large farm or small plantation because, according to the U.S. Census of 1840, they owned nine slaves.

In August, 1862, just shy of his 16th birthday, William joined the Confederate States cavalry. Numerically his regiment was designated the 5th Missouri Cavalry, but as noted in the preceding regimental history, it was also known by several other names.

One Missouri document places Private Andrews in company “C”, while surviving CSA records in the National Archives have him in company “E.”  For our purposes we are accepting “E” over “C” as the latter designation could have been a clerical error based on handwriting styles of the period.  To whichever company Private Andrews was assigned, the teenaged warrior’s military career seems have been fairly brief and dominated by illness.

By the end of December, 1862 the Company Muster roll notes our private as “Absent…. Left in Hospital at Van Buren Dec. 5th 1862.”  A similar entry was made for January and February, 1863 and a final entry for the latter month simply notes “Left-Sick in Arkansas.”  As additional records apparently do not exist, it is not known if William was thereafter granted a medical discharge or if he recovered sufficiently to serve with his regiment for at least a portion of or the remainder of the rebellion.

Surviving his military experience, William appears to have returned to Missouri where he married Margaret S. Paxton (b. ca 1844 VA).  The couple’s first child, Susan, was born in Sedelia, MO on 6/7/70. Sadly, she died the same year. Margaret bore William one more child, a son they named John S. (b. 11/8/71 MO) before she, too, died. The cause and date of her passing is not known.

Following his wife’s death William remarried to Sarah Louise Burnette (b. 2/6/58 GA). The date of their wedding is not found within available documentation.

During the U.S. Census of 1870 William and Margaret were residing in or near the community of Clear Creek located in Cooper County, MO. No occupation was listed for William. For the next three decades the census people could not find William and family……..

1900. A new century. A new decade.  William, Sarah and family were census tallied as still residing in Missouri, but by this time they were farming in Center which was located in Dade County.

As William was a Confederate, and not a Union veteran, he was not eligible to receive a U.S. pension for his Civil War soldiering.  And, since tumultuous Missouri was not one of the southern states to grant such stipends, no post war documents are available to answer questions such as when and why the Andrews family moved to the Puget Sound area Washington State.  Perhaps it was grown children living in the area telling of new, unclaimed farming land.

Former Confederate cavalry trooper William J. Andrews died 4/15/13 at age 66 years and 7 months.  Cause of death is not known.  Burial was/is in the Snohomish, WA Grand Army Of The Republic (G.A.R.) Cemetery. A Johnny Reb buried amongst many Billy Yanks……..

After William’s passing, Sarah lived with stepson, John S. in Lake Stevens, Snohomish County, WA at least from 1920 to 1930. She was/is buried beside William in the G.A.R. Cemetery in Snohomish.

FOOTNOTE: John S. Andrews died in Everett, Snohomish County, WA on 9/18/51. He is buried in the G.A.R. Cemetery with his father and stepmother.