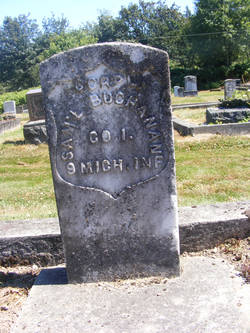 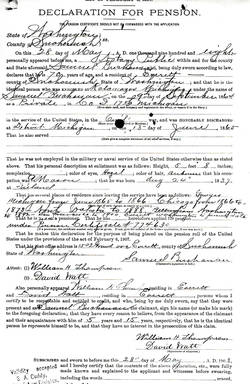 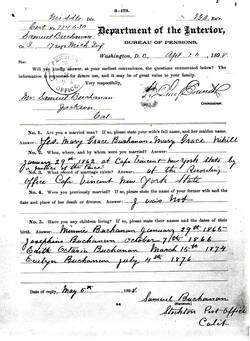 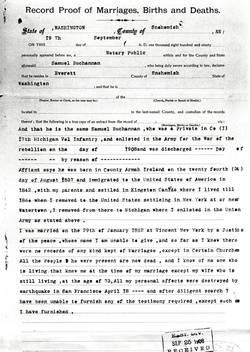 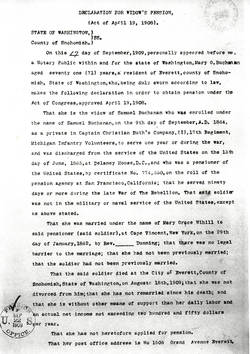 The 17th was organized in Detroit, Mi. during the spring of 1862. In mid September it was baptized by fire at South Mtn. and Antietam, Md. In May/June ’64, following numerous engagements in the war’s Western Theater the 17th moved south with Grant’s Overland Campaign.

On 5/12 during fighting around Spotsylvania, VA the unit was surrounded and practically annihilated. Thereafter it nearly lost its regimental organization for want of numbers. After this, members were detailed to the Engineer Corps and at division headquarters from whence they took part in actions leading to the capture of Petersburg, VA.

In April, 1865 the 17th participated in the Grand Review before returning to Michigan where it was disbanded

ED NOTE:  The original birth-to death biographical profile on Samuel Buchannan was written during the early of the Civil War Veterans Buried in Washington State project.  As such it was limited both in size and in the number of research resources available.  The profile below was created in July, 2018. While it contains many more details than the original, it still suffers from a depth of information that can only be garnered through pension and other files housed in the National Archives located in Washington D.C.

On 1/29/1862 Samuel married Mary Grace Nihill/Nyhill (b.1838/39 or 40/Ireland). At some point following their marriage the couple moved to Michigan.  There in the late summer of 1864, Samuel enlisted in the U.S. Army as a “substitute” for one John H. Payne.  By the time Buchanan joined the 17th, remnants of the unit were involved in the siege of Petersburg, VA. It was there he first contracted hydrocele and malarial poisoning which was to afflict him the remainder of his life.

After Samuel returned home from the war he and Mary began their family. Although Mary would later claim to have given birth to nine children, the names of only five are documented. First born was daughter, Minnie (1/29/65).  Next, on 10/7/66 came daughter Josephine.

The Buchanan remained in Michigan until some point after Josephine’s birth.  Then they moved to Chicago, IL.  There in 1869 son Samuel was born.

At the time of the 1870 U.S. Census the Buchanan family was back in Michigan.  Their locale of residence at that time was Saugatuck in Allegany County.  Samuel was supporting his family as a brick mason.

In 1873/74 the family next moved to North Dakota.  There daughters Edith O. (3/15/74) and Evelyn (/*4/76) came into the world. During this period there may have also been a stint of residence in Canada as, according to one source it was in Canada, not in North Dakota, that daughter Evelyn Was born.

It is not known where the Buchannan’s resided while in North Dakota.  Also not documented is how long they remained in that state as there is no 1880 census data on Samuel and family.

Around 1888/89 the Buchanan family reportedly moved to the Puget Sound area of Washington Territory/State settling in Bellingham, Whatcom County and, apparently later, Anacortes Skagit County.  However by 1892/93 they had left the state and moved to Stockton, San Juaquin County, CA.  Another California location where the Buchanans resided was Antel/Angels Camp Calaveras County (1900).

In the latter part of 1900 or 1901 Samuel and Mary returned to Washington State settling in Everett, WA.  This would be the couple’s last move.

In May, 1908 Samuel Petitioned the U.S. Government to grant him a disability pension stipend based on his period of Civil War service.  It is not known if the request was granted prior his death on 8/18/09.

Samuel’s 9/18/09 obituary in the local newspaper read as follows:

“Samuel Buchanan, aged 70, died at his home, 1434 Grand Avenue, yesterday afternoon at 5:30 o’clock.  Funeral services will be held at the family residence at 2:30 Saturday afternoon.  Interment will be in the G.A.R. (Ed: Grand Army Of The Republic) cemetery, Snohomish”

In 1910 the widowed May was residing in San Mateo Township 1, California with married daughter Josephine and her husband.  When Mary died and where she is buried is not known.