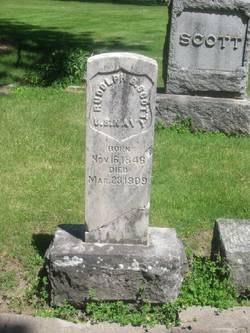 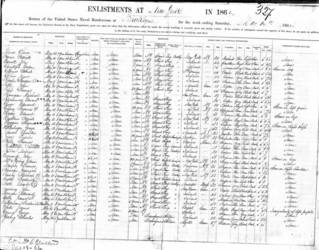 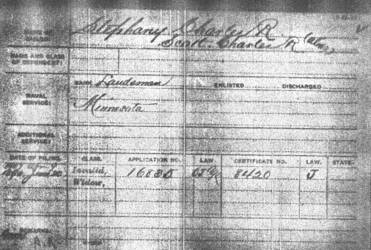 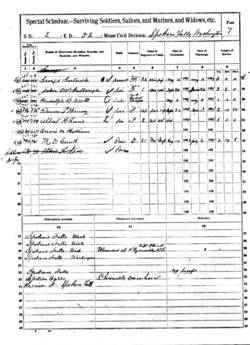 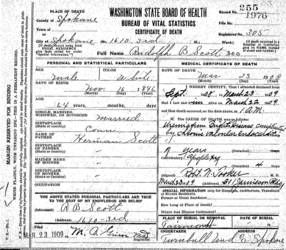 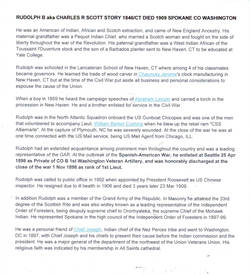 He was an American of Indian, African and Scotch extraction, and came of New England Ancestry. His maternal grandfather was a Pequot Indian Chief, who married a Scotch woman and fought on the side of liberty throughout the war of the Revolution. His paternal grandfather was a West Indian African of the Toussaint l'Ouverture stock and the son of a Barbados planter sent to New Haven, CT to be educated at Yale College.

Rudolph was schooled in the Lancaterian School of New Haven, CT where among 4 of his classmates became governors. He learned the trade of wood carver in Chauncey Jerome's clock manufacturing in New Haven, CT but at the time of the Civil War put aside all business and personal considerations to espouse the cause of the Union.

When a boy in 1859 he heard the campaign speeches of Abraham Lincoln and carried a torch in the procession in New Haven. He and a brother enlisted for service in the Civil War.

Rudolph was in the North Atlantic Squadron onboard the US Gunboat Chicopee and was one of the men that volunteered to accompany Lieut. William Barker Cushing when he blew up the rebel ram "CSS Albemarle". At the capture of Plymouth, NC he was severely wounded. At the close of the war he was at one time connected with the US Mail service, being US Mail Agent from Chicago, ILL.

Rudolph had an extended acquaintance among prominent men throughout the country and was a leading representative of the GAR. At the outbreak of the Spanish-American War, he enlisted at Seattle 25 Apr 1898 as Private of CO B 1st Washington Veteran Artillery, and was honorably discharged at the close of the war 1 Nov 1898 as rank of 1st Lieut.

Rudolph was called to public office in 1902 when appointed by President Roosevelt as US Chinese inspector. He resigned due to ill health in 1906 and died 3 years later 23 Mar 1909.

In addition Rudolph was a member of the Grand Army of the Republic. In Masonry he attained the 33rd degree of the Scottish Rite and was also widley known as a leading representative of the Independent Order of Foresters, being deuputy supreme chief to Oronhyateka, the supreme Chief of the Mohawk Indian. He represented Spokane in the high council of the Independent Order of Foresters in 1897-99.

He was a personal friend of Chief Joseph, Indian chief of the Nez Perces tribe and went to Washington, DC in 1897, with Chief Joseph and his chiefs to present their cause before the Indian commission and the president. He was a major general of the department of the northwest of the Union Veterans Union. His religious faith was indicated by his membership in All Saints cathedral.

They had children - Rodolfo Bowman Civil Engineer for the city of Spokane; Henry W. Scott May 1886 Spent time in Mexico and Panama; Addie S.

Adelle's father Henry O. Wagner was a well known character in the anti-slavery days on connection with his service in the operation of the underground railroad. At one time at his home in Chicago he entertained John Brown, the martyr of Harper's Ferry, and twelve fugitive slaves, all of whom he assisted on their way to freedom in Canada. Henry Sr. is living with his daughter Marcelena [Maridian] and her 2nd husband Robert Beatty in 1900 Denver, CO. Adelle's brother, Henry O. Wagner Jr. was for 5yrs US Consul at Lyons, France.

They had children - Rodolfo Bowman Civil Engineer for the city of Spokane; Henry W. Scott May 1886 Spent time in Mexico and Panama; Addie S.