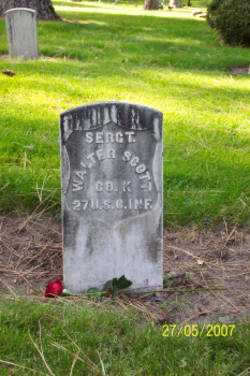 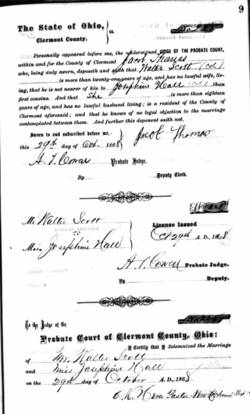 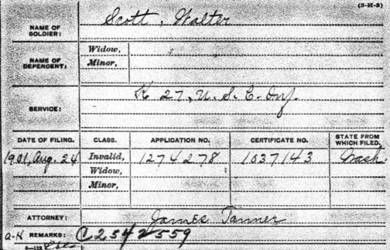 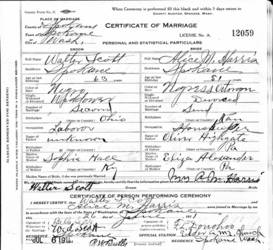 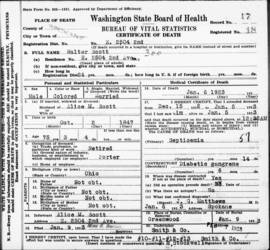 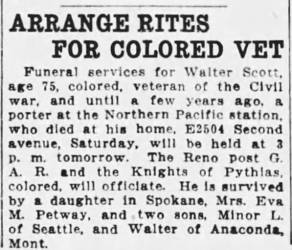 So last Wednesday, I had a long to-do list and I was making good progress. I took a break, went to my reading list and came across this great post by Miriam Midkiff. She'd spent Sunday of Memorial Day weekend visiting and photographing veterans' gravesites in the Spokane area. An excellent project! She posted a number of photos at Find-A-Grave. One of these was that of Sgt. Walter Scott, Company K, 27th Regiment, United States Colored Infantry. Noting that African-Americans are “a definite minority” in the Spokane area, Miriam wrote, “I'd love to find out more of his story!” Oh, no! I groaned. Because . . . I . . . was . . . busy. I didn't have time to take that on, as Miriam all but invited me to do! Doesn't she know that I'm an addict when it comes to tracking down stories like that?!

Walter Scott was probably born in Ohio in 1847. If he was born in Ohio, which is suggested by most census records, he probably was born in Clermont County just across the Ohio River from Kentucky. Clermont County was a hotbed of abolitionist activity. There were numerous Underground Railroad sites in Clermont County, six of which have been preserved to this day. Walter may have been born near New Richmond, which hosted an Underground Railroad station. We have no record of his parents' names or his siblings' names. However, we have some clues that further research might bear out. These are mentioned below.

Walter enlisted in the 27th Regiment, United Sates Colored Infantry, apparently at or soon after the time it was organized in 1864. He would have been seventeen years old. The 27th had a short but illustrious wartime experience. The unit went first to Maryland. From there, they pushed into Virginia, moving as far south as the James River. Part of the 27th's mission was to guard federal trains moving through enemy territory. They then participated in the siege of Petersburg and Richmond from June 1864 to December 1864. The 27th then moved into North Carolina where they helped capture Fort Fisher in January 1865 and then they were involved in the capture of Wilmington in February 1865. By April 1865, the 27th Regiment moved on Raleigh and was part of the occupying force there. In May 1865, the 27th was present at the surrender of Confederate Gen. Joseph E. Johnston. The men of the 27th Regiment were mustered out in September, 1865.

Walter Scott's service must have been exemplary. That's because, in less than two years, this teenager rose from private to sergeant. Only the best soldiers, black or white, were promoted to sergeant so rapidly. Most of Scott's fellow enlistees left the Army as privates. Scott left the Army at or shortly after the time the regiment was disbanded.

In 1870, he was back in Ohio, married to a woman named Josephine, said to have been born in Mississippi. They had a year old baby also named Walter. Living with them was 108 year old Phoebe Smith. The 1870 census did not show relationships, so it is not clear who this person is. She could be the grandmother or great-grandmother of either Walter or Josephine or she may not be related to them at all.

In 1870, Walter was working as a steamboat deckhand on the Ohio River. [Interestingly, Robert Fulton's first commercial steamboat, operating between Albany and New York City, was nicknamed “Clermont,” same as the county in which Scott resided.] On the 1870 census, Scott and his family are described as “mulatto,” suggesting that he had one white parent, most likely his father. The birth place of his father is blank, while his mother is said to have been born in Virginia. Also on the 1870 census is a 49 year old black man named Willis Scott, also living in Clermont County and working as a steamboat steward. Willis Scott is said to have been born in Virginia.

By the time of the 1880 census, Walter and Josephine were still in Clermont County, Ohio, but now with four children: the aforementioned Walter, May, age 9, Minor, age 7, and Martha, age 2. Walter had continued to work on the steamboat.

We don't know what the Scott family did in the twenty years between 1880 and 1900, except that they moved from Ohio to Spokane, Washington. In Spokane at the time of the 1900 census, Walter and Josephine resided with their daughter “Alfa” Keene [Martha], who had been widowed and their granddaughter, Josie Keene. Walter was working as an “expressman.”

Now of course, the most interesting question is raised. In 1900, Washington state had a black population of just over 2,500. So why did Walter Scott move his family across the continent to the Pacific Northwest? To answer that question, we may have to go back to the Army.

Both the 24th and 25th Infantry were at one time or another stationed at Fort George Wright near Spokane. This installation opened in 1899. There were in those regiments a number of men who had made the Army a career after the Civil War. Several had made sergeant; a number were from Ohio and Kentucky. It's easy to suppose that Walter Scott knew some of these men and had been in contact with them. So Scott's contacts in the Army may have told him about the social climate for Negroes in the Northwest. This climate was observed and described by Booker T. Washington during a tour of the region in about 1913. In a letter to the New York Age, Washington wrote: "As one travels still further in the direction of the Pacific Ocean, conditions among our people change, sometimes for the better, sometimes for the worse, but on the whole for the better."1

Washington commented specifically about relationships between the community and the black soldiers:

I spent three pretty busy days in Spokane and spoke nine times to various kinds of audiences, One piece of information which was given to me by both white and colored people, especially by whites in Spokane, interested me very much and that was that the 25th Infantry, a Negro regiment of the United States Army,made a better record when in camp at Fort Wright near Spokane than any other soldiers that have ever camped there. One of the members of the Chamber of Commerce told me that the citizens of Spokane were practically unanimous in their regret that the colored soldiers were replaced by white ones. The members of the 25th Infantry made an exceptional record for fine and orderly conduct. It was very noticeable in Spokane that the reputation which these soldiers made had gone a long ways towards giving the white people a higher regard for the colored people in that vicinity.2

Washington goes on to note other examples of cordial racial relations in Spokane, Seattle, and Tacoma. It's not hard to imagine that this benign atmosphere was conveyed to Walter Scott by some of his Army buddies, who probably urged him to relocate. [It must be said that by the time of world War II, Spokane's regard for black soldiers seems to have cooled. In an official Army study entitled The Employment of Negro Troops, it is noted that "Spokane, Washington, citizens objected to stationing Negro Air Forces units at nearby fields, for they felt that their own Negro populations were too small to provide social contacts for Negro men.”]

Perhaps on the strength of such rosy assessments, the Scotts left Ohio and moved to Washington state. By 1910, Josephine had died. Walter was working as a porter at a hardware store. Walter the younger was a janitor; hid wife Blanche was a masseuse. Younger son Minor was a laborer at a smelter in the Tacoma area.

It's not clear to me that the Scotts were necessarily better off in the Pacific Northwest than they had been in the Old Northwest. Booker T. Washington's letter may provide a clue as to why:

One finds in a city like Spokane a few colored people who are succeeding in the professions and in business, and those men are well thought of. The principal drawback to the people in the city grows out the fact that they are barred, as I stated in my former communication, from the trades. As of yet, I have found no place where the trades unions give the colored man any chance at the trades. It seems pretty well understood in this part of the world that a colored laborer must be a porter, messenger, or something of that kind.3

This attitude on the part of working class unions may not have been motivated completely by racial animus. One must suppose that the government's use of black troops to suppress labor demonstrations had something to do with it as well.

In any event, Walter Scott moved out west for the same reason other Americans did: to find greater opportunity for his family. He died sometime between 1920 and 1930. His son Minor died in 1952 after working as a longshoreman in Seattle.

This is just a glimpse inside a much more complex story. Thanks, Miriam [seriously!] for opening up an area many of us don't know much about: the history of African-Americans in the Pacific Northwest.