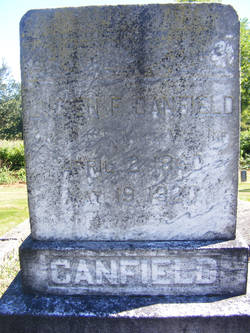 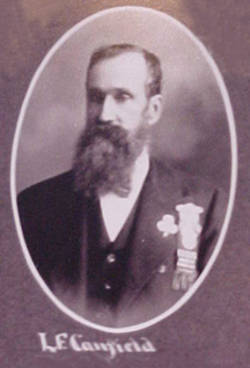 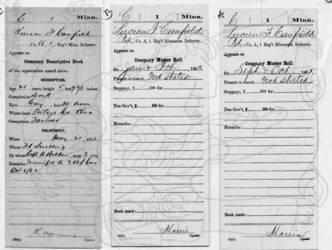 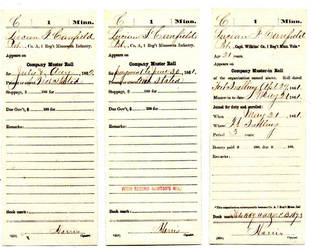 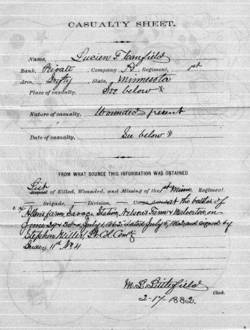 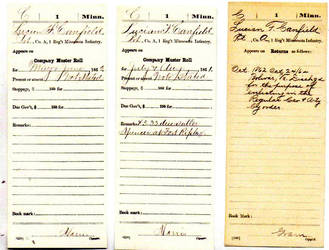 Lucian Canfield Muster Out Transfer to 1st US Calvary October 1862 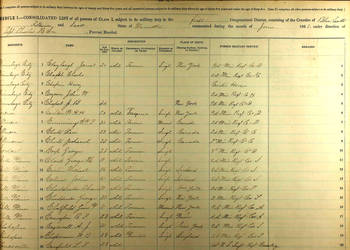 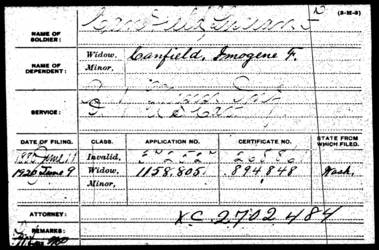 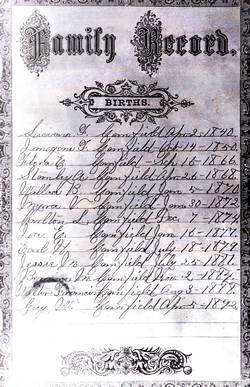 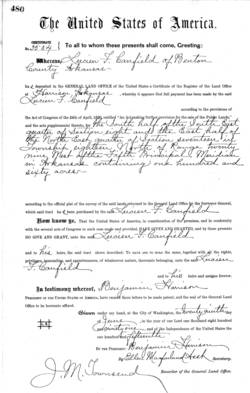 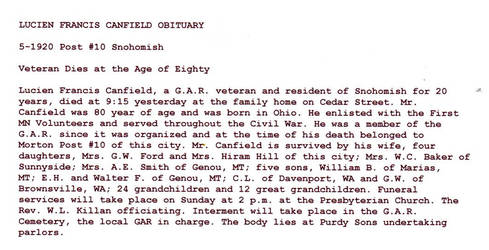 The 1st, an "eastern theater" regiment was initially mustered into Federal service for three months. Shortly thereafter, however, the call went out for all regiments to serve for three years. The 1st was then re-mustered for the longer period of service.

Elements of the unit were first sent to forts Ripley, Ridgley (MN) and Abercrombie (ND) before the entire regiment left the state for Washington, D.C./Alexandria, VA on 6/22/62. Shortly thereafter, in July, the 1st fought "like veterans" at the first battle of Bull Run/Manassas. In that conflict it lost 180 killed, wounded or captured, the highest loss percentage of any Union regiment in that battle. Picket duty and drill then preceded serving as rear-guard during the Union retreat from the disastrous action at Ball's Bluff, VA (Oct. 21, 1861)

1862 found the 1st in Virginia's Shenandoah Valley and on the peninsula during Union Gen. McClellan's campaign to capture Richmond. Actions at South Mtn., MD, Sharpsburg/Antietam, MD and Fredericksburg, VA capped the combat year.

In early May, 1863 the regiment was at Chancellorsville, VA, while July 2nd found them at Gettysburg, PA. With only 262 men present the 1st charged two Rebel brigades which had routed the forces on Union Gen. Dan Sickles, drove them back and held their position until relieved. Of those who went into action, 215 lay on the field, 47 held the line and not a man was missing. (Note: The 1st MN later erected the first-ever monument, a very modest urn on a pedestal, within the Gettysburg National Park.) The percentage of loss was without equal in the annals of modern warfare.

August, 1863 saw the 1st travel to New York, NY to help quell riots protesting the military draft. In November, following a hot engagement at Bristoe Station, VA it participated in the Mine Run campaign before settling into winter quarters.

In April, 1864 the regiment was ordered back to Ft. Snelling where those whose terms of service had expired were mustered out. Those who re-enlisted, plus new recruits then formed a two company battalion known as the 1st Battalion Minnesota Infantry. That unit then moved back into Virginia ending up in the siege of and actions around Petersburg.

The final months of the War in early 1865 saw the battalion, now three companies strong, participating in the final Petersburg assault before pursuing Confed. Gen. R.E. Lee's fleeing forces toward Appomattox Ct. House where they surrendered on 4/9/65. With hostilities ended, the 1st was sent to Louisville, KY before returning to Ft. Snelling for final muster.

Prior to the opening shots of the American Civil War the 1st was stationed on the Pacific coast and in the southwestern
U.S.  Then, from 11/61 to 1/62 it was concentrated in Washington, D.C.

From the time it moved eastward until the ending of hostilities, as an "eastern theater" regiment, the 1st participated in a veritable "who's who" listing of battles and engagements stretching from 7/16-21/61 at first Bull Run/Manassas to an expedition to Danville, VA on 4/23-29/65. After that it marched to Washington City where it participated in the Grand Review before turning to post-war assignments.

Lucien Francis Canfield was born 4/2/40 in Charleston, Portage County, OH to Carlton Stanley (no b.d., b. NY) and Louisa M. (no nee b. 1805 NY) Canfield. He had at least three older siblings, Ann M. (b. 1833 OH), Manetta/Marietta (b. 1837 OH) and James (b. 1839 OH). There was at least one younger brother, Daniel A. (b.1846 OH) and one younger sister, Elisa/Eliza (b. 1847 OH). Other than the fact that Carlton Canfield was not noted in the 1860 U.S. Census and therefor had likely either abandoned his family or died, which left Lucien to be raised by his mother, no additional information is available pertaining to his childhood, formative or teenaged years.

The 1860 census found Lucien working and living on his older brother James' Minnesota farm.  Likely he was still there in Louisville, Scott Co. MN when on 4/29/61, shortly after his twenty-first birthday, the 5'9 1/2", and dark complexioned farmer, responded to his nation's call-to-arms and enlisted in Captain Alexander Wilkin's infantry company which subsequently became Co. "A" of the 1st Minnesota Infantry regiment. (Note: One source indicates Lucien also served in company "D" of that unit, but no documentation to that effect has been found.) According to family lore, friend John Ford enlisted at the same time. However, a search of database file for the 1st MN does not show a John Ford in the regiment. In later years, John would marry one of Lucien's sisters.

Military records indicate that during the 6/29, 6/30 and 7/1/62 battle of Allen's Farm/Savage Station, VA during Union Gen. George McClellan's Peninsula Campaign to capture the Confederate capital at Richmond, Private Canfield received artillery shell wounds to his right arm and knee. Although apparently not serious and treated within the regiment the wounds were reported in the hometown newspaper back in Minnesota.

In October, 1862 Lucien began the process of transferring from the volunteer infantry to the regular U.S. Cavalry. On the one hand, perhaps his wounding during the "seven days battles" convinced him that the infantry was not the place for him. On the other hand, it has been said that these "lateral transfers" from the volunteers to the regulars were for only the originally-agreed-to period of enlistment and were accompanied by a hefty monetary bonus or "bounty."

Whatever the motivation, the transfer resulted in Private Canfield missing out on the 1st Minnesota's gallant, yet devastating charge and stand in front of Cemetery Ridge during the 7/1-3/63 battle of Gettysburg, PA.

With one glaring exception Lucien tenure with the cavalry appears to have been fairly benign. Available records note only one period of detached service and two periods of absence due to illness. Then, on 9/12/63 at Camp Buford, MD, Private Canfield was brought before a general court martial board on the following charges and specifications: Charge #1 Conduct to the prejudice of good order and military discipline. Specifically, on or about 9/3/63, near Owen Hill, MD he had entered a home in the neighborhood of the 1st Cavalry’s camp and stolen a brass hall lantern belonging one Mr. James Owen Perry, a citizen. Charge #2 was that he had been absent without leave when the alleged theft occurred. The specifications concerning this charge were that he had been away from his brigade and regimental camp without proper authority during the night of 9/3/63. Private Canfield plead not guilty to charge #1 and its specifications and guilty to charge #2 and its specifications.

Speaking in his own defense Lucien addressed the assembled board in the following manner: “I have been in the service some two years and four months, and had made frequent applications for a pass, which was refused. I went away on the morning of the third of September, 1863 to see a friend and conducted myself like a gentleman, was sober all the time I was away and when I came back, which was the afternoon of the 4th of September 1863.”

The court subsequently found Private Canfield not guilty of charge #1 and its specifications, but accepted his guilty pleas on charge #2 and its specifications.  As a result, he was sentenced “to be confined at hard labor in charge of his regimental guard for two months, and to forfeit to the United States ($10.00) ten dollars per month of his monthly pay for the same period.”

At some point in 1884 Lucien and son-in-law George Willis "Will" Ford decided to tour the United States by rail. During this excursion they visited Arkansas and liked it so much they decided to move their families there which they did, settling near Little Rock. While there is no census data for 1890 because it was destroyed by fire, available documents place Lucien in Arkansas in 1891 and 1892. The 1891 document, which notes the family residing in the town of Lowell, Benton County, is interesting because in it Lucien claimed to have served as a 1st Lieutenant in Co. "E" 4th MN Infantry and as a sergeant while in the 1st U.S. cavalry. However to date no documentation has been found to substantiate either claim. In terms of '92 documentation, family lore notes that during this year four of the older Canfield children moved to the Puget Sound region of Washington Territory. They, in turn, prompted two others to move to the northwest and, ultimately, convinced Lucien, Imogene and the rest of the family to join them which they did in 1900. Here it should be noted that while in Arkansas two Canfield children had been born, but another two, Stanley and Marietta "Marie" had died.

In Washington Lucien, Imogene, Earl, Bernice, Walter and Guy settled into a "nice furnished house" located in the Snohomish County community of Snohomish. It appears initially Lucien was not employed, but that was apparently remedied shortly as Lucien, who had carpentry skills and son Earl began building "cottage-type houses in Snohomish. Family records indicate the two would build, sell and move to another, a process they repeated many times.

1910 and 1920 found the Canfields ensconced in Snohomish. In the former year he was noted as having his "own income", while in the latter he was a "gardner at home."

Lucien Canfield died 5/19/20 in the family home located on Cedar St. in Snohomish. He was 80 yrs 1 month of age at passing. He was survived by nine children, twenty four grandchildren and twelve great-grandchildren. Burial was in Snohomish's Grand Army of the Republic Cemetery.  After her husband's death Imogene remained in Snohomish. She died there on 9/25/40 and was buried beside Lucien.