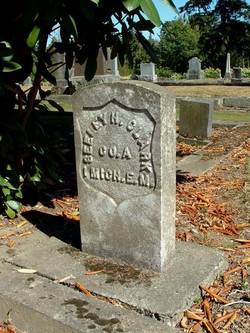 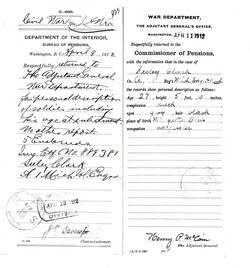 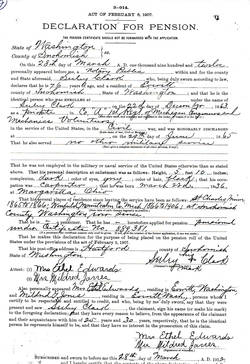 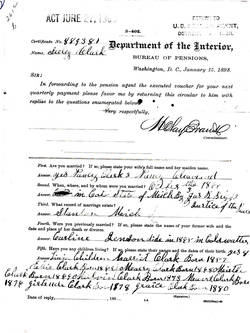 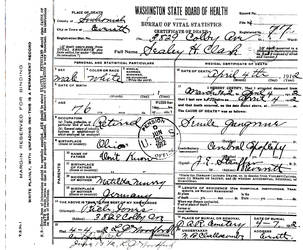 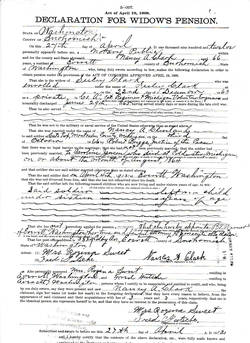 The 1st E & M, a three-year organization, proved to be a western theater regiment throughout its period of service. Various companies served in the armies of The Ohio, Tennessee, and The Cumberland in a “who’s who” listing of Federal actions throughout the south.

Functioning as what might be termed a Civil War army version of the U.S. Navy’s WW11 “Fighting Seabees,” the regiment participated in combat while at the same time acting as a construction unit whose tasks included building storehouses, powder magazines, blockhouses and other fortifications, road construction and either tearing up or rebuilding/operating railroads.

ED. NOTE: The original birth-to-death biological profile on Seeley Clark was written during the early years of the Civil War Veterans Buried in Washington State project. As such, it suffered not only from size limitations – bios were initially displayed on 17” x 24” placards – but from limited research sources. The profile below was written in June, 2018. While it contains many more details than the original, it still suffers from the depth of detail now available in documents from the National Archives in Washington, D.C.

Seeley Hezekiah Clark was born 3/22/36 in Marietta, OH. His father was Hezekiah S. Clark. Mr. Clark was born in New York in 1810. He died at the age of thirty in Cuyahoga, Ohio. Seeley’s mother was Matilda Murry. She was born in 1815 either in Germany or New York State.

Beyond the names of his parents all that is known about Seeley’s birth family is that he had, perhaps, as many as four siblings or as few as one, a sister. Another insight into his pre-war years are that he was 5’10” tall, had gray eyes and black hair, and was a carpenter by trade.

During the U.S. Census of 1860, which was apparently tallied prior to the birth of Ettie, the Clarks were residing in or near the community of Niles located in Berrien County, MI. There, Seeley listed his occupation as “river hand.”

In December, 1863 Seeley enlisted in the U.S. Army. Available pension documents provide no details on Private Clark’s subsequent period of military service. However, by the time of his death that service had garnered him a $15 government disability pension stipend based on illness or other frailties he traced back to his days of Civil War soldiering.

While he was away at war, Seeley’s wife, Caroline, died. Her death came in August, 1864 in Coldwater, Clinton County, MI. No details are available pertaining to her passing or who looked after the children following her death.

While, as noted, all of the Clark children were born in Michigan there were several places of residence for the family during those years. In 1870 they were in Watertown, Clinton County. There Seeley listed his occupation as “cabinet maker.” A decade later, in 1880 the family was farming in the Kent County community of Spencer. As most of the census data for 1890 was destroyed by fire we know not the family’s whereabouts at that time, but in 1900 they were still in Michigan apparently living in Petoskey, Emmet County with married daughter Mildred and her husband. At that time Seeley listed his occupation as “laborer”

The Clarks remained Michigan until 1906 when, most likely to be near family members, they moved to Everett, Snohomish County, Washington to live, at least for a time ca 1910, with son Melvin and his family. By this time Union Army Veteran Seeley was invalided and no longer employed.

On 4/4/12 in Everett, Washington Seeley H. Clark former Union soldier died at the home of his brother in law. The 4/5/12 Everett Daily Herald read, in part, as follows: “Mr. Clark leaves a wife, one son and seven (sic) daughters, three of whom are in the East and the others are in the city. Mr. Clark had a stroke of paralysis about fourteen years ago, from which he never fully recovered. Another recent stroke resulted in his death.”

At passing Seeley was 76.1 years of age. Burial was/is in the Grand Army Of The Republic (G.A.R.) Cemetery located not far from Everett in Snohomish, Snohomish County, WA.

Nancy Clark died 8/17/18 in Granite Falls, Snohomish County, WA. At the time of her death she was receiving $25 per month based on her late husband’s Civil War soldiering. She was/is buried beside Seeley in Snohomish.