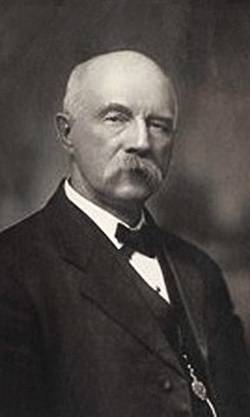 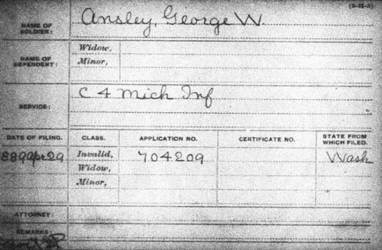 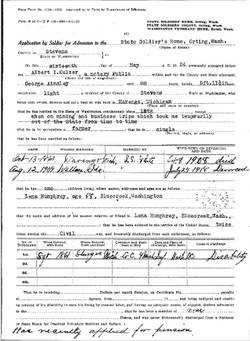 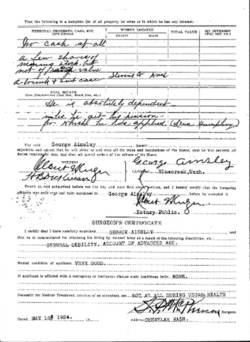 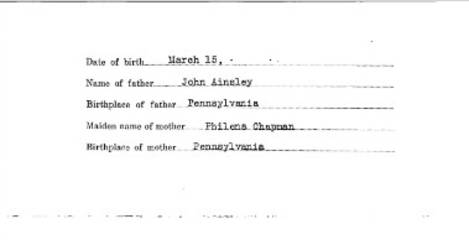 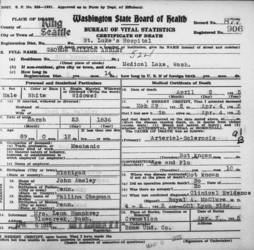 George Wallace Ansley enlisted for three years service as a Sergeant in Company C of the Fourth Michigan Volunteer Infantry on June 20, 1861, at Adrian, Michigan. He mustered into Federal service on the same day. George was discharged for disability on July 30, 1861, in Washington D.C.

Sources: " Record of Service of Michigan Volunteers in the Civil War 1861-1865, vol. 4", also known as the "Brown Book" and personal research from the soldier's Compiled Military Service Records and Pension Application file from the National Archives.

For further information on the Fourth Michigan Infantry, copy this link into your browser and press enter: www.4thmichigan.wordpress.com

In 1877, he headed for California, On 10th of Jun 1878 he left the city of San Jose with a party northbound, which party included George W. Ansley, his wife and 3 children, Byron Carver and wife, Rush Hotchkiss his wife and 2 sons, M/M Jerve Barber, George Robinson, Sylvia Kelley, M/M Ross Brown, George Brown and family. They party continued their journey to the north and upon reaching the northern part of the state of CA were joined by William T. Barnes and James M. Lackey and their families.

It was the intention of the party to go straight north to Walla Walla by the Goose Lake route, but owning to Indian troubles, they were compelled to return westward from Alturas and cross the Cascades into the Willamette Valley in OR at Ashland. They traveled north as far as Eugene, OR where they paused for 3wks to rest their horses and wait for the Indian troubles to subside, after which they again traveled eastward over the Cascades into eastern OR and arrived at Walla Walla 10 Sept 1878.
m [1] 13 Oct 1863 Marengo, Calhoun Co., MI
Electa G. Duncan
They had 3 children - Frank, Lena A., Sherman Duncan
m [2] 12 Aug 1909 Wallace, Shoshone Co., ID
Mrs. Ida J. Finney nee Curtis - divorced ca1918 *her 3rd marriage -no issue