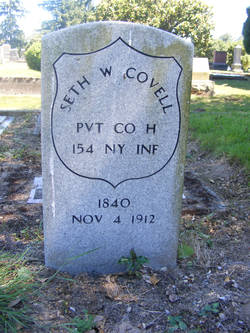 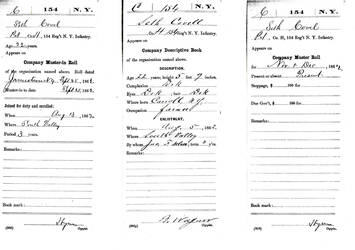 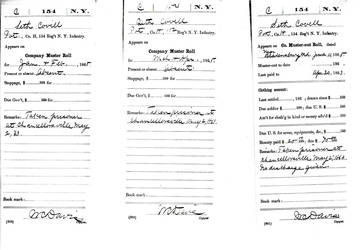 The 154th, a three year regiment, was recruited in the counties of Chautagua and Cattaraugus in the far southwest corner of New York State.  It left the state almost immediately following federal muster and was assigned to the Army of the Potomac.

In May, 1863 the unit suffered severely in the disaster which befell that army at Chancellorsville, VA. In July, it was again "roughed up" during the first and second day’s fighting at Gettysburg, PA.  The 154th concluded the year in the western theater where it saw action at Wauhatchie and Missionary Ridge, TN.

1864 found the 154th still in the west fighting from Chattanooga, TN to Atlanta, GA.  It concluded its combat career by marching northward with Union Gen. William T. Sherman during the Carolinas campaign.  After participating in the May, 1865 Grand Review in Washington, D.C., the regiment was mustered out of service.

ED. NOTE:  The original birth-to-death biographical profile on Seth Covell was written during the early years of the Civil War Veterans Buried In Washington State project. As such, it suffered from a lack of research sources such as those that are accessible via today’s internet. The following update written in June, 2018 although more detailed than its predecessor, still lacks the depth and detail of today’s bios. Part of this is because Private Covell, a U.S. Army deserter, was not eligible for a U.S. Government pension based on his days of Civil War soldiering.

The U.S. Census of 1850 placed the Covell family in South Valley, Cattaraugus County, New York. The census a decade later found them in the same location, but with son John Harrison heading the family as father, John, had died on 5/28/54 in Kentucky. No details are available pertaining to the Covell patriarch’s passing.

On May 2, 1863, during the battle of Chancellorsville, VA, Seth was captured by Confederate forces.  By May 9th he was in prison in Richmond but was paroled on May 15th at City Point, VA.  He was then transferred to Camp Convalescent, VA, where a “Memorandum of Prisoner of War” form noted that on July 12, 1863 Private Covell had deserted, but later “rept’d back of his own accord.”  The return to duty, however, was to be short lived as a final documental entry noted “on roll dated Aug 10-63 as having deserted from Camp Convalescent, VA since July 31-63.”

While it appears Seth permanently deserted the military, apparently no action was ever taken regarding the offense and the 154th was never notified.   Company H’s muster roll continued to carry him as absent “taken prisoner at Chancellorsville May 2, ‘63” through final muster in June, 1865.  That final muster document noted “No discharge given.” It also noted that Private Covell was still owed $75 of a $100 enlistment bonus/bounty.

Seth’s whereabouts during the latter 1860’s and throughout 1870s are not known.  However, circa 1887 he married Harriet “Hattie” Maria Wallace (b. 6/21/59 Buffalo, Erie Co., NY). Hattie had been previously married, so it is not known if Wallace was her surname by birth or by marriage.

In his post-civil war years Seth was apparently, at one time, employed as a logger. In the 1900 census for Stanely, Barron County, WI he noted that he was, like his father, a farmer.

In 1901 the Covells moved westward from Wisconsin and settled on a ranch in the rural community of Machias located in Snohomish County, Washington.  The move may have been motivated by Seth following the timber industry to the forests of the Pacific Northwest, but as it came relatively late in his life, it was more likely made to be near the families of adult Covell children who lived in the region.

The 1910 U.S. Census for Machias Snohomish County, Washington lists the Covell home as being comprised of Seth (no occupation listed), Hattie and children Birney, Frank, Everett, Walter and Annie. However, at the top of the list of children is Earl W. aged 28 (b. ca. 1882. This was a son by Hattie’s previous marriage


On 1/12/13 Hattie died. No details are available pertaining to her passing. Burial was/is in the Grand Army Of The Republic (G.A.R.) Cemetery located in Snohomish, Snohomish County, WA.

Seth’s next move appears to have been to Seattle in the fall of 1920.  Again, the why of the move was not documented, but three of their sons lived in that city. The move  would be Seth’s  last as a living, breathing human being.

In Seattle circa late August or early September, 1921 Seth received unspecified injuries in a street car accident.  The injuries lead to his death two months later.  His death and burial were noted in the 11/4/21 issue of the Everett Herald newspaper.

Seth was/is buried beside Hattie in the Grand Army Of The Republic Cemetery in Snohomish, Snohomish County, WA. Ironically, he is surrounded by Civil War comrades who served in the same Federal army from which he deserted.

As a final note on Seth Covell’s life and death, the year of his passing on his headstone is miscast. Instead of 1921 it erroneously reads 1912.