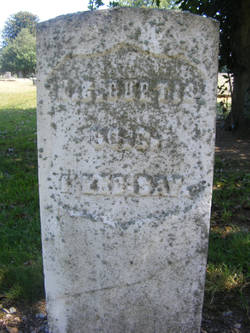 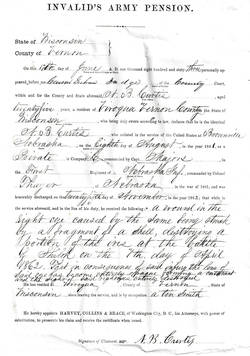 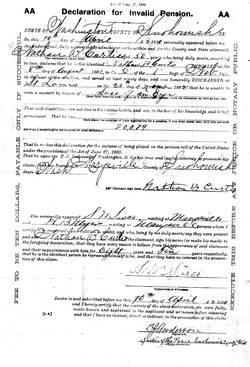 The 1st, a three-year infantry regiment, was recruited from The Territory at large and mustered in by companies. The initial battalion immediately left for Missouri where, in mid August, it was joined by the remainder of the unit. In Missouri the 1st scouted for bushwhackers until 2/1862 when it was ordered to Tennessee. Here it received high praise for its behavior under enemy fire at Ft. Donelson.

The Unit was next actively engaged during the second (4/7/62) day of fighting at Shiloh. Once more it received the highest praise form Union Gen. Wallace for its bravery and gallantry.

In 1863 after moving throughout Tennessee, Arkansas, Mississippi, and Missouri, the 1st was recruited to the full complement of a cavalry regiment. By special order dated 10/11/63 it was then re-designated the 1st Nebraska Cavalry. By 9/64, focus of this western theater unit now, because of consolidation, known as the “1st Regiment Nebraska Veteran Cavalry” began to shift away from Johnny Reb toward hostile Indians threatening communications routes throughout Nebraska.

NOTE: The following biographical profile was originally created during the early years of the Civil War Vets Buried In Washington State project. As such it suffered from a dearth of documental material to draw upon. It was updated in March, 2018.

Nathan B. Curtis was born during the month of September. The year was 1839 . His place of birth was Chittadee, VT. No birth date has been found in available documentation.

In 1850 the U.S. Census found the Curtis family – with Amos listing his occupation as laborer – in Randolph, Norfolk County Massachusetts

1861. Nathan, a 5.8”, blue eyed tinsmith entered the U.S. Army. Why the supposed Wisconsin resident joined a Nebraska regiment is unclear. While later pension affidavits place Mr. Curtis in Wisconsin in 1858/9, another source lists his residence as Nebraska at the time of his enlistment. Perhaps he was residing there for a time in 1861.

On 4/7/62, during the second day of fighting at Shiloh/Pittsburg Landing, TN, a fragment from an exploding artillery shell struck Pvt. Curtis in the right eye, destroying part of the iris. After being hospitalized at St. Louis he was given a medical discharge because of loss of vision in the eye. Returning to the Wisconsin village of Virogua Nathan resumed his pre war occupation as a tinsmith.

The census of 1870 found now laborer, Nathan still in Wisconsin, but then residing in Chippewa Fall, Chippewa County. However, perhaps by 1877 or by 1880 at the latest, he was in the Puget Sound area living in or near Snohomish, Snohomish County, Washington Territory. While there is some indication that Nathan may have resided in the Snohomish County community of Marysville for a time, all census tallies place him in Snohomish City.

. Nathan’s occupation in Washington Territory/State was initially, listed as cook in a logging camp. A census tally conducted in 1887 noted his occupation as only “cook” while the one for 1900 listed woodsman. In all, it appears that Nathan’s years in Washington combined cooking and the timber industry to provide him with employment and sustenance. .

In 1891 Nathan’s war-damaged eye prompted the former army private to seek a government disability pension. Such was granted as at the time of his death the old veteran was receiving a $17 per month stipend.

Nathan B. Curtis was never married. He died 5/6/15 at seventy five or seventy six years of age. . Burial was/is in the Snohomish Grand Army Of The Republic Cemetery.