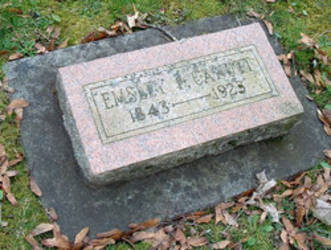 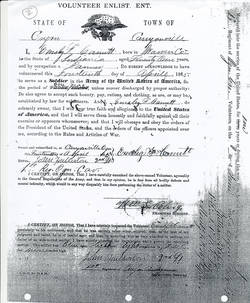 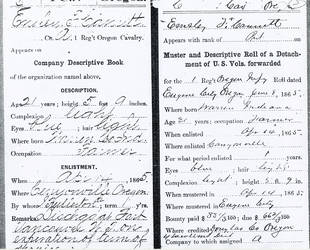 Raised “at large” within the State of California, this three year regiment began its existence as the 1st California Cavalry.  Initial companies were assigned to Ft. Vancouver, Washington Territory; where they were issued old fashioned muskets, pistols and sabers.

Much to the disappointment of members of the 1st, the unit was never “sent east.”  Instead, throughout its tenure the regiment was stationed in the Pacific Northwest where it covered thousands of miles performing the inglorious duties of conducting scouting expeditions, chastising hostile Indians, guiding emigrant wagon trains and hunting down robber bands.

During the spring/summer of 1865, with original enlistments expiring, remaining veterans plus new recruits were consolidated into a four company (A,B,C,D) battalion which was designated the 1st Oregon Cavalry.  The Oregon 1st continued service until final muster in late 1866.

In the waning days of America’s War of the Rebellion Emsley, by then a 5’9”, blue eyed farmer, signed on with the U.S. cavalry for a period of one year.  For doing so he received a $100 signing bonus or “bounty.”  His period of service, spent entirely in the Pacific Northwest was apparently benign to the point of being marred only by one instance (6/65) of illness which confined him to quarters.

With military service behind him it appears Emsley returned to Oregon and his parents and siblings.  He was there in 1870 and, when in 1876 the Canutt clan moved northward to Whitman Co, WA Terr., he moved with them.  By 1890 the family was in Colfax, WA.

Emsley died 4/23/23 at the Lake Stevens, WA home of his youngest brother, John.  The 79.7 year old former Civil War trooper had never married.  However his nephew, Yakima Canutt was a Hollywood actor and famous stuntman. He worked with many of the great actors on major films and has a star on the Hollywood walk of fame