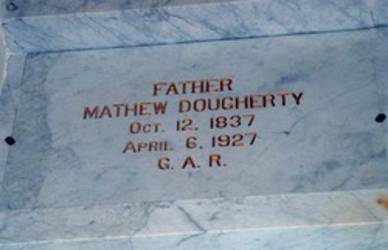 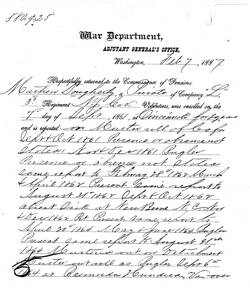 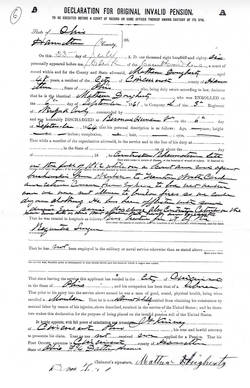 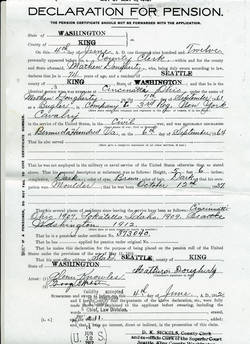 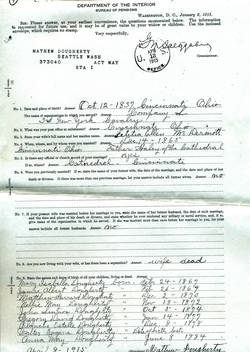 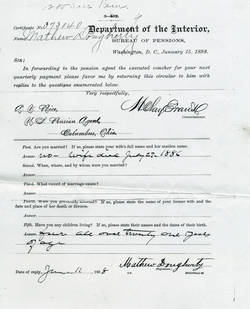 The 3rd, a three-year regiment, was named in honor of its first Colonel, James H. Van Alen.  As fast as companies were raised they left the state for Meridian Hill, near Washington D.C. where the regiment was organized.  While most companies were recruited in New York, Co. L was raised in Cincinnati and Xenia, Ohio, and Co. M was recruited in New Jersey.

The 3rd served in the Army of the Potomac until April, 1862 and then in the Dept. of North Carolina the remainder of ’62 and all of 1863.  April 1864 found the unit in the Army of the James.  It saw much hard service, particularly in operations around Petersburg, VA (5/64), the raid to the South Side and Danville railroads (6/64), and in action on the Darbytown Road (10/64) during the rest of the war.

In all, the 3rd participated in about 122 engagements and many minor skirmishes.  With consolidation of companies at War’s end, remnants of the 3rd became the 4th Provisional Regiment, N.Y. Volunteer Cavalry.

Ed. Note: The original birth to death biographical profile on Matthew Dougherty was written during the early yers of the Civil War Veterans Buried in Washington State project.  As a result it was limited both in scope and research sources. The biography which follows was written during September, 2018. It contains much more detail than the original, but still suffers from in depth detail found in more recent additions to this website.

Matthew Dougherty was born 8/12/37. His state of birth was Tennessee.  According to family sources, his father’s name was George W. Dougherty (b. 1805 VA. Family sources also say his mother’s first name was Mary. Beyond this, all that is known about here is that was reportedly born in 1808  in  Virginia, Tennessee or Missouri.

In 1861 5’7” Matthew Dougherty entered the U.S. Cavalry.  At the time he listed his occupation as “molder.” Most likely this was a task connected with the metal foundry industry.  While in the military Private Dougherty performed the role of bugler.  Records are unclear if he entered the service as a bugler or assumed that role thereafter. However, it appears he maintained bugler status throughout his period of enlistment.

Matthew’s Civil War legacy appears to have been poor health resulting from exposure to the weather.  By his telling, he contracted rheumatism in the late fall of 1862 while on “scout” for “bushwhackers” in North Carolina.  The weather was very wet and as fires were not allowed in camp, he could not dry his clothing.  A head catarrh, perhaps sinus infection, seems to have stemmed from the same period.

The rheumatism was to follow him the rest of his life and, by 1906, at age 48 years, had rendered him almost totally unable to pursue his vocation as a “laborer.”  At the time of his death Matthew was receiving a princely $72 month government disability pension based on his Civil War soldiering.

The U.S. Census tallies for both 1870 and 1880 found Matthew and family in Cincinnati (ward 166) Hamilton County, Ohio. In 1870 Matthew again listed his occupation as molder, but clarified it further with the addition “store. ”What a store molder’s job entailed is not known.

Matthew’s wife, Lettitia/Letitiia died 6/27/86 or 7/26/88, Details pertaining to her passing are not available. She was/is buried in the St. Joseph New Cemetery in Cincinnati, Hamilton County, OH.

As of 1900 widower Matthew was living in Richmond, Wayne County, IN. Also in the home was son, David.

By 1907 David was reportedly living in Pocatello, Idaho.  Exactly when and why the move was made are not known. Most likely the why of the  move  to either be near or live with one of his adult children  only four of whom were reportedly still living as of mid-1898.

1912 found the former cavalry bugler moving to the Puget Sound area of Washington State.  Again, the move was likely made to be near or live with a family member.

While it appears Mr. Dougherty may have initially settled in Seattle, King County, Washington for six years prior to his death on 4/6/27 he resided at the home of his daughter, Mrs. Charles Brumley “on the Monroe paved road.”  At death Matthew Dougherty was 89.7 years of age.

His obituary read, in part,   as follows: Note surname spelling

Matthew Daugherty, 89 years old, of Shorts district, a veteran of the Civil war, died Wednesday evening at Gale hospital in Monroe…..  (He) served during the war as a bugler in L company, Third regiment of New York Cavalry. He resided the past six years at the home of his daughter Mrs. Charles Brumley, on the Monroe paved road. Others who survive him are two sons M.G. Daugherety and David Daugherty in the East; four grandsons, Charles, Albert, Chester and Walter Brumley, and a granddaughter, Blanche Brumley. Funeral services will be held Saturday at 8 p.m. from the C.H. Bakeman’s chapel. The Rev. L.C. Shultz will be at the Snohomish Mausoleum at G.A.R. (Grand Army Of The Republic) cemetery (in Snohomish.)