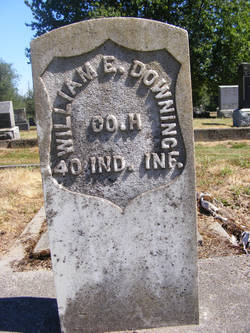 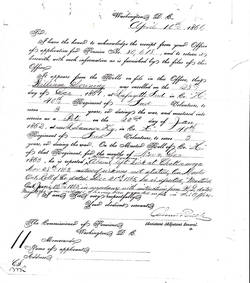 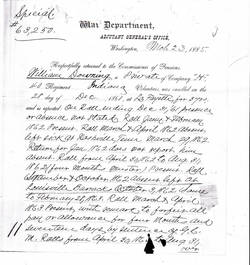 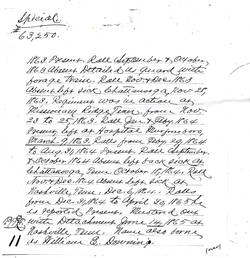 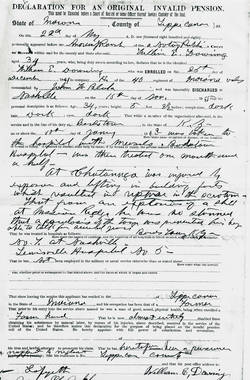 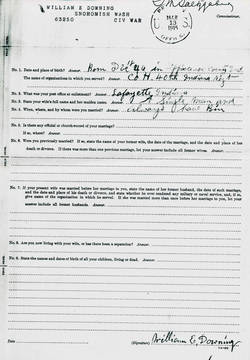 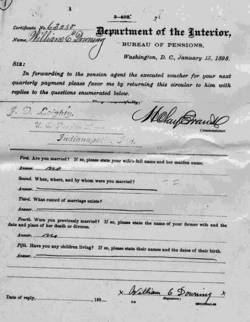 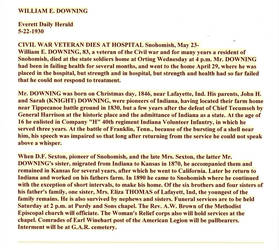 During the 1864 Atlanta campaign it was conspicuously engaged at Dallas, Kennesaw Mountain, The Chattahoochee River and Peachtree Creek. After the fall of Atlanta the 40th was ordered to Tennessee where it took part in the battle of Nashville.

It then pursued Confederate Gen. Hood’s forces as far as Huntsville, AL. In 1865, after stops in Louisiana and Texas it was mustered out of existence. During its history a total of 1755 officers and enlisted men passed through the regiment.

NOTE: The original birth – to – death biographical profile on William Downing was created during the early years of the Civil War Veterans Buried In Washington State project. As a result it was limited in both size and research resources. The biography which follows was written in April, 2019. While it contains many more details than the original, it still lacks the depth of more recent additions to this website which draw heavily upon veteran-related military, pension and other documents housed in the National Archives in Washington, D.C.

Five foot, nine inch farmhand William remained in the town of his birth until entering the military in 1862. Once there his first “fight” was with a case of the measles which hospitalized him for a month and a half.

In “The battle Above the Clouds” (Missionary Ridge, TN.) a shell exploded near William stunning him to such a degree that his tongue was paralyzed and “he was unable to talk above a whisper for several years.” At the battle of Chattanooga, TN. he received a slight leg wound, but was more seriously disabled and hospitalized by exposure and a ruptured scrotum suffered while constructing fortifications.

William’s military service was apparently not without other tribulations as pension records contain reference to his forfeiting pay/allowances for four months and serving 10 days in the camp stockade (jail) during March/April ’63. No details are available pertaining to the incident. Leaving the military, Private Downing returned to his hometown of Tippecanoe

In 1870 William followed his sister and her husband (Snohomish pioneer D.F. Sexton) [1] to Kansas where he resided for several years before traveling to California. Later, he returned to Indiana to work his father’s farm before, in 1890, following the Sexton’s to the Puget Sound area of Washington Territory.

.Once he arrived in the Pacific Northwest, with the exception of short intervals, William continued to make his home with the Sextons in the Snohomish, Snohomish County area.

In the spring of 1930 William’s health began to fail. As a result he was moved to the Washington Soldiers’ Home located in Orting Pierce Co., WA and placed in the facility’s hospital.

Failing to respond to treatment the old soldier died on 5/21/30 at the age of eighty three years. Burial was/is in the Grand Army Of The Republic (G.A.R.) Cemetery in Snohomish, WA. As William was “a single man and always had been” he left no direct descendants.

[1] D. F. Sexton is also a Civil War Veteran. He is buried in the Grand Army Of The Republic (G.A.R.) Cemetery in Snohomish, Snohomish Co., WA