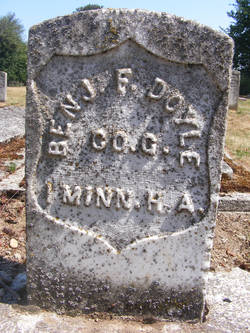 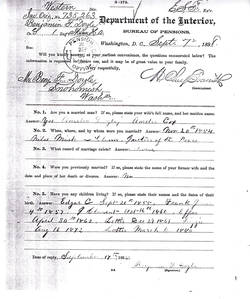 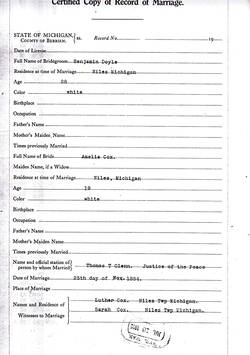 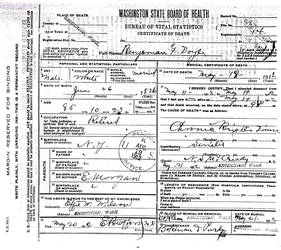 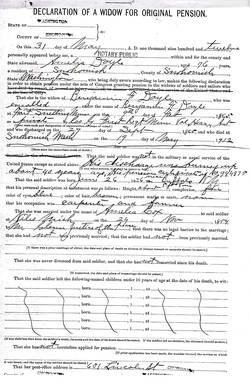 This one-year regiment was organized during the summer of 1864, mustered in by companies/batteries and ordered to Chattanooga, TN during the winter of 1864/65.

Composed of twelve 140-man companies/batteries, plus officers, the unit was assigned to the heavy guns in defensive forts, a responsible position, as it was thought Confed. Gen. Hood would endeavor to retake the city.

Unlike most artillery regiments which seldom, if ever, came together as a unit, the 1st spent its entire tenure of service functioning as a unified command stationed in one location.

Ed. Note:  The original birth – to – death biographical profile on Benjamin Doyle was written during the early years of the Civil War Veterans Buried In Washington State project. As such, it suffered from a lack of size and research sources such as are available today. The biography below was written in September, 2018. While it contains many more details than the original it still lacks the depth bios being created today.

By 1850 the Doyles had quitted New York in favor of Minnesota. The U.S. Census for that year found the family residing in or near the community of Meridian located in Ingham County. In Minnesota Samuel listed his occupation as “farmer.”

As of 1857 Benjamin and family were farming in Minnesota. Their community of residence at that time was Carver located in the county of the same name.  Three years later, they were located in Florence, Lincoln County.

In the waning days of America’s War of The Rebellion the 5’8” carpenter/farmer Benjamin enlisted in the U.S. Army.  At aged thirty-eight years he was far above the average for a Civil War soldier.  His term of service would prove benign as he was never wounded and not listed as taken ill.  Further, with the exception of one period of detached service with the quartermaster’s corps he remained with his unit throughout his brief military tenure.

The first post Rebellion sighting we have for the Doyles comes from 1870 when they were farming in Penn McCloud
Co., Minnesota. They had the same address in both 1875 and 1880. But by 1885 they had moved to Grafton Sibley County, MN.

By 1889 the Doyles were living in Snohomish, Snohomish Co., WA Territory/State.  Why they moved there is not known.  Likely, though, the resettlement was made to be near the family/families of one or more of their adult children. As of 1900 six of their seven were still living.

Former Union private, 85.10 year old Benjamin Doyle, a “well known” resident of Snohomish died at the, Snohomish General Hospital on 5/18/12.  Cause of death was noted as “chronic Bright’s (kidney) Disease.”  At death he was receiving a $20 per month government disability stipend based on his Civil War soldiering. Burial was/is in Snohomish’s Grand Army Of The Republic (G.A.R.) Cemetery.

After Benjamin’s passing, Amelia remained a widow. She continued to live in Snohomish until her death on 7/2/27.  At passing she was receiving $50 from the government. She was/is buried in Snohomish beside Benjamin.