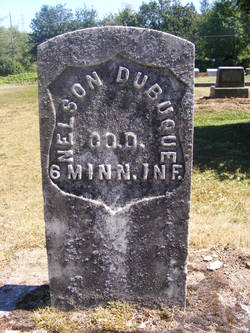 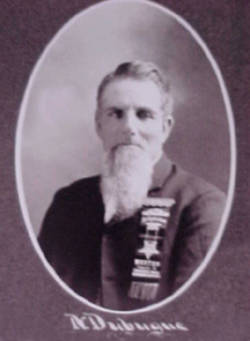 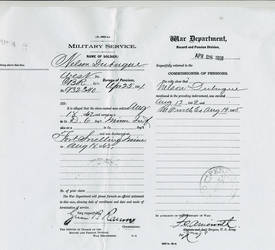 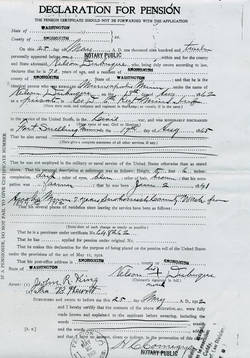 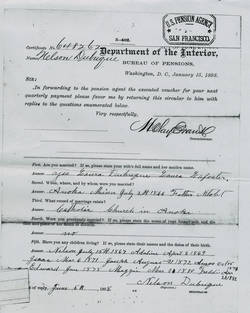 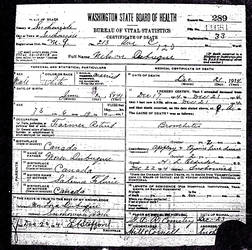 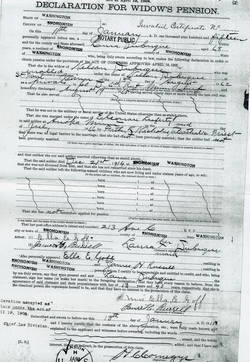 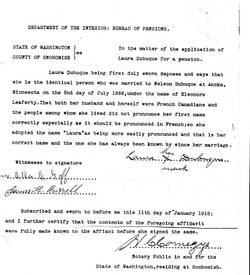 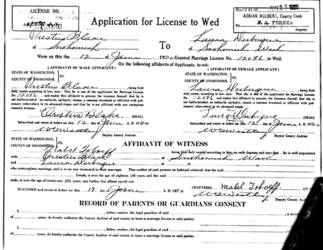 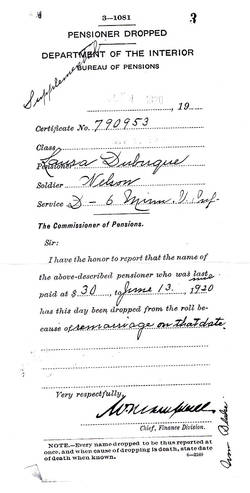 Laura Dubuque dropped from pension notice due to remarriage 1920 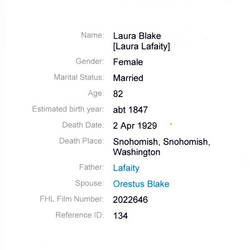 During the summer of 1862 initial elements of the 6th (Company D was not mustered in until 9/29)  were dispatched within the state to deal with the Sioux Indian uprising which was making Minnesota run red with the blood of settlers. An early engagement at Birch Coolie resulted in 23 dead, 45 wounded and the death of all 87 of the unit’s horses before the Indians were driven off.

The regiment spent the ‘62/63 winter garrisoned throughout Minnesota.  In April 1863 the 6th assembled and, that summer was in engagements with the hostiles at Big Hills, Dakota Terr., Stony Lake and at the Missouri River where the enemy’s camp equipage was captured and destroyed.  Winter ‘63/’64 found Co’s D, E, and H designated to accompany an expedition to Ft. Thompson where captured Indians were to be settled and supplied.

They reached the fort on 2/2 then made the return trip to Ft. Snelling on half rations in bitterly cold weather.  In mid 1864, after long and persistent efforts, the 6th was ordered to south to meet Johnny Reb.  Their first stop, however, turned out to be garrison duty in Arkansas where inactivity and the disease producing southern climate took a terrible toll on regimental health

Arriving 940 strong, within a short time only 26 men were able to report for duty and many of them were sick.  In November, 1864 the regiment was sent to St. Louis, MO for provost guard (military police) duty.  In March, 1865 the 6th was sent to Mobile, AL where they landed on Dauphin Island and, at long last, skirmished with rebels as part of the corps which captured Fort Blakely.

A movement to Montgomery, AL was followed by final muster In Minnesota.

Ed. Note: The original birth to death biographical profile on Nelson Dubuque was written during the early years of the Civil War Veterans Buried In Washington State Program. As a result, it suffered from size and research resource limitations. The biography which follows was created in September, 2018. While it contains much more detail than the original, it still lacks the detailed depth of more recently produced bios found within this website.

On August 13, 1862 Nelson enlisted in the U.S. Army His unit of service was company “D” of the Minnesota Infantry. Available documents contain no information pertaining to the 5’6” darkly complexioned farmer’s subsequent military tenure. However, based on his regiment’s reported privations, plus the fact that Nelson was later granted a government disability stipend based on his military service, he undoubtedly suffered health difficulties which haunted him in later life.

As noted by the earlier mentioned census information after the war nelson returned to his parental family in Maple Grove, Hennepin County, Minnesota. From there he moved on to Anoka, MN where, on 7/2/66, he married Eleanor Leaferty 8/51) also of French Canadian parentage.  Because Minnesotans could not correctly pronounce her French first name, Mrs. Dubuque assumed the name “Laura.”

While it appears Nelson returned to farming, and was active in public affairs, a Seattle Times newspaper article later noted that the Dubuque brothers each had homestead rights to 160 acres of land plus an additional 80 acres granted to soldiers that, by 1890 Calice had utilized to plat the town of Dubuque northeast of Snohomish where he built a sawmill.  Nels then acquired twelve yoke of oxen and became a logger supplying his brother’s mill.

In the Boom-or bust tradition of the times, the town of Dubuque received the latter fate and is now only remembered by “Dubuque Road” which “branches east from the Snohomish-Machias road three miles north of Snohomish.

As of 1890 Nelson and family were residing in the Pilchuck area of northern Snohomish County.  At that time and location Nelson listed his occupation as “farmer.” Ten years later, in 1900, he, Laura and sons Edward and Willie were living in Snohomish City where Nelson was said to be the guardian for the cemetery. Perhaps this was the original Snohomish “Pioneer” cemetery which no longer exists.

After “periods of sickness which occurred over several years,” Nelson Dubuque died 12/21/14 at the age of 73 yrs., 6 mos., 4 days.  Cause of death of the “retired farmer” was listed as bronchitis exacerbated by apoplexy (stroke) and heart disease.  Burial was/is in the Snohomish Grand Army Of The Republic (G.A.R.) Cemetery.

The census of 1920 found the widowed Laura still living in Snohomish.   It appears that later that year, on 6 /13/20 in Snohomish, she remarried to one Orestuts Blake.  Laura Eleanore Lafferty Blake died 4/2/1929 in Snohomish County and is buried at GAR cemetery.