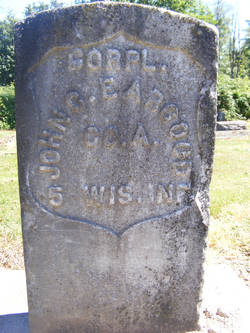 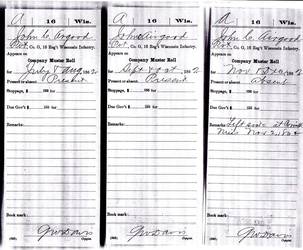 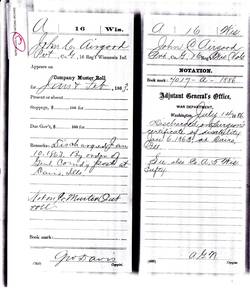 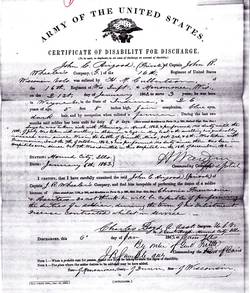 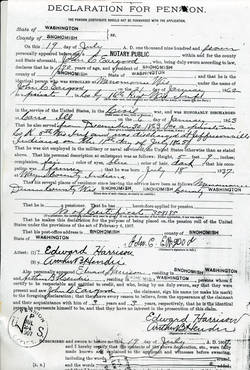 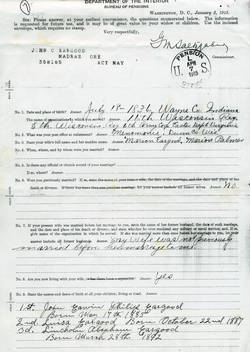 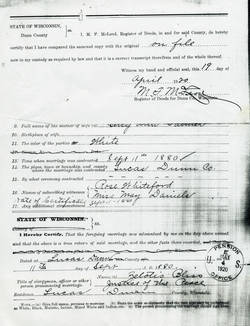 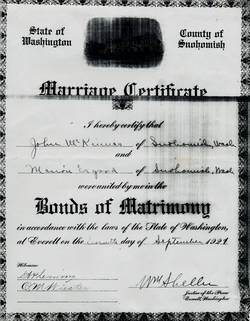 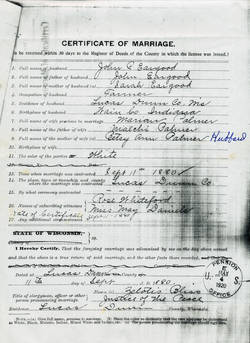 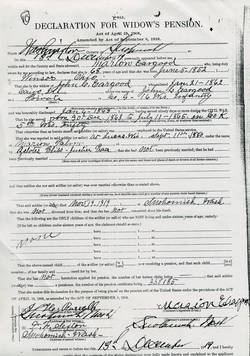 A three year, western theater, regiment, the 16th left Wisconsin on 3/13/62 and proceeded to Pittsburg Landing, TN where, on 4/6 and 4/7, it lost 245 killed and wounded during the battle of Shiloh.  The siege of Corinth, MS followed during the same month.  Later, in October, came the battle for that city.

Railroad guard duty took the regiment to the end of the year and beyond.  1863 found the unit remaining in Mississippi until it embarked upon Union W.T. Sherman’s Atlanta, GA campaign.  The 16th was before Kennesaw Mtn., occupying trenches and skirmishing during most of 6/64.  During the battles before Atlanta that July the regiment lost 123 killed and wounded.  It then marched to the sea and took part in the siege of Savannah.

1865 found the 16th marching northward through the Carolinas.  The 16th was engaged at Beaufort, Whippy Swamp and at Orangeburg where it waded through swamps to drive the enemy from his positions.  The battle of Bentonville preceded participation in the Grand Review at Washington D.C. and final muster.

A three year, eastern theater, regiment, the 5th departed Wisconsin for Virginia almost immediately following federal muster.  There it took a “conspicuous” part in the Battle of Williamsburg and the Peninsular Campaign.  As 1862 drew to a close the unit fought at Antietam, MD and was present at Fredericksburg, VA.

In May, 1863 the unit was at Chancellorsville, VA. October, 1863 found the 5th on duty in New York City enforcing the draft.  That same month it was one of two regiments to carry the main fort and redoubts at Rappahannock Station, VA.  Remaining in Virginia, mid 1864 had the unit active at The Wilderness, Spotsylvania, Cold Harbor and Petersburg during initial movements of Union Gen. U.S. Grant’s Overland Campaign.  Sent to the defense of Washington, D.C., original recruits were mustered out on 8/3/64 after which unit remnants and recruits formed a three company battalion until returning to regimental strength in October.

The revitalized 5th then moved into Virginia’s Shenandoah Valley where it was engaged at Snicker’s Gap, Charles Town and at Cedar Creek.  With Confederate forces defeated in “The Valley,” the 5th joined Grant’s armies before Petersburg where it participated in the engagement at Hatcher’s Run and, in April, 1865, the relief of Fort Stedman and the final Petersburg Assault.

At Sailor’s Creek it advanced through a waist deep swamp “in the face of galling fire and compelled the enemy to surrender.”  The regiment was with 6th corps when Confed. Gen. R.E. Lee surrendered at Appomattox Court House.

Ed. Note: The original birth to death biographical profile on John Eargood was written during the early years of the Civil War Veterans Buried In Washington State project. As such, it suffered not only in size, but in terms of available research sources. The bio which follows written in September, 2018 while featuring many more details than its predecessor, still lacks the in depth of more recent additions to this website.

While no definite documentation is available pertaining to John C.’s childhood, formative or teenaged years, he was likely raised in a farm environment. That environment appears to have been characterized without a father figure being present as the 1850 U.S. Census for Madison Jay County, Indiana shows only Sarah Eargood and her three children being in the home.

Shortly after entering the military Private Eargood was beset by pleurisy which, on 3/18/62, left him hospitalized at Mound City, IL while his regiment moved on.  Having returned to duty in mid-July, that fall he participated in the October 3rd and 4th battle of Corinth, MS, but within a few days of that conflict was stricken with pneumonia.  The chronic nature of that ailment plus swelling of his abdomen and legs (ascites) again landed him in the hospital and, on 1/6/63 resulted in him being granted a medical disability discharge.

After returning to Wisconsin and good health, on 12/30/63 John. Eargood once again joined the U.S. Army.  While available records do not address the subject, this enlistment may have been prompted by receipt of a cash bonus or “bounty.”  Private Eargood’s second period of service was with the 5th Wisconsin infantry.  He joined the regiment on 4/18/64 at Brandy Station, VA.  This tour of duty appears to have been served without wound or illness.  The only documented entry of note on his service record is that on 7/13/64 he transferred from Co. “K” to Co. “A.”

As with many Civil War veterans, exactly where John settled upon returning to civilian life is not documented. Although his name does not show up in the 1870 U.S. census, It appears that he was somewhere in Wisconsin because he used his period of military service to stake claim to a homestead tract. As best as can be determined he applied for said homestead on 1/15/75. Where the homestead was located is not known, but as of the census for 1880 John was residing in Lucas, Dunn County, WI, so that likely is where the homestead was located.

In 1885 the Eargoods were farming in Menomonie, Dunn County, WI. In 1900 they were still farming in Wisconsin, but at that time in or near Dunn in Dunn County.

Exactly when and why the Eargoods departed WI is not known, but by July, 1907 the family was in Snohomish, Snohomish Co., WA.  In April, 1915 they were in Madras, OR, but when, on 11/19/1919, John died they were back in Snohomish. He was/is buried in the Snohomish Grand Army Of The Republic (G.A.R.) Cemetery.

Following her husband’s death Marion met another ACW veteran, twice wed John McKinnis of Port Orchard, Kitsap Co., WA.    The two married 9/7/21 and subsequently set up household in Snohomish, likely in Marion’s home.  While in Snohomish Mr. McKinnis’ health declined markedly.  He died on 5/23/23 at the age of 84.7 years and was/is buried in the Snohomish G.A.R. Cemetery (Row 23 Site 3).

At some point following the death of Mr. McKinnis, the now twice widowed Marion moved to the Soldiers’ Home in Retsil. Kitsap Co., WA. She was residing there as of 1920 and in 1930. A decade later, however, she was in a Seattle King County hospital. She died in Seattle on 11/18/40. Her place of burial is not known.