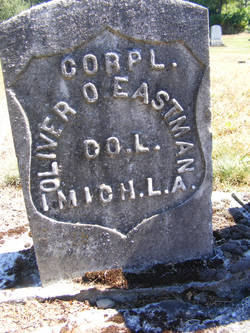 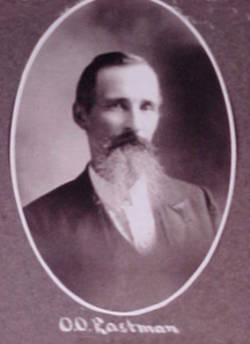 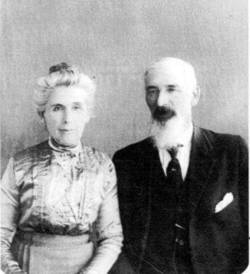 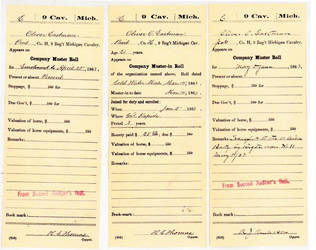 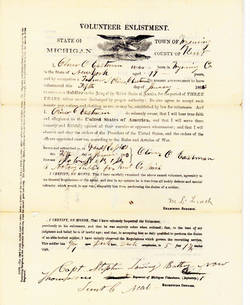 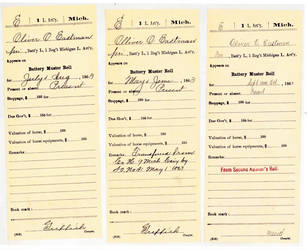 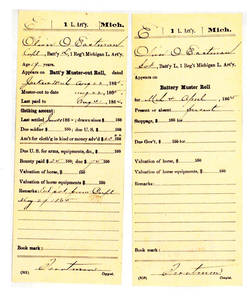 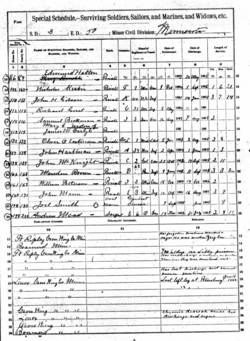 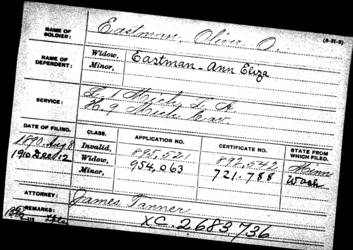 This regiment was equipped with Spencer repeating rifles when it left the state for its first engagement against Rebel guerillas at Triplett Bridge, KY. The unit was subsequently involved in the pursuit and capture of Confederate Gen. John Morgan.  In 1864 the 9th took part in the Atlanta Campaign and “marched to the sea” with Sherman. In early ’65, after the fall of Savanagh the regiment participated in the Carolina Campaign.

Following final muster the 9th was “paid off” and disbanded, having seen 1213 men pass through its ranks.

Note: The companies of a Civil War infantry of cavalry regiment usually served together as an organization. However, the character of a regiment of artillery was such that the different companies known as batteries (generally 6 guns) were seldom, if ever, assembled into one group.

Thus, while batteries of the 1st took a conspicuous part in the western theater and with the Army of the Potomac in the east, here we are focusing solely on the career of Batt. “L” which was organized at Coldwater, MI with the 9th MI Cav. 4/63. On 5/20/63 Battery L left Michigan for Kentucky.

It was there on 6/13, at Triplett’s Bridge, it engaged the enemy. It next participated in the pursuit of Confederate Gen. John Morgan’s raiders before marching to the occupation of Knoxville, TN. In 12/63 the battery suffered the privations of the East Tennessee Campaign. Arriving at Cumberland Gap, the countryside was found to have been so overrun by both Union and Confederate armies that it was impossible to supply the horses and mules with forage.

As such, the animals were removed to a location where they could be fed while the men manned forts at the Gap. Here they remained until 6/64 when they were again furnished with mounts and teams. Sections were then sent to guard bridges and upon scouts until the battery was sent back to Michigan and disbanded.

Note: What follows is an updated version of a birth – to – death biographical profile written during the early years of the Civil War Veterans Buried In Washington State project. The original was limited in size and by research sources. This new biography, created in February, 2019 is much more detailed than the originals, but still lacks the depth of more recent profile offerings entered onto this site.

According to one source Oliver O. Eastman was born 3/2/43. Another source points to July, 1843. Herein we are accepting the March dates. His birthplace was Attica, New York.

As evidenced by Jonathan’s state of birth, between 1843 and 1846 the Eastman family had quitted New York for Ohio. Then, by 1860 they had moved even further westward to Muskegon, Muskegon Co., MI.

What had prompted the Eastman family’s moves during the ten years between 1850 and 1860 is not documented. Perhaps, though, it was the death of Joseph Eastman and Eunice’s remarriage to Edmund J. Town, Jr., a carpenter by trade. Mr. Town brought one son – Albert B. Town (b. 1842 NY GAR ACW veteran. buried Grand Army Of The Republic (G.A.R.) Cemetery Snohomish, Snohomish Co., WA) to the marriage. Edmond and Eunice also had a son, Joseph Justin Town (b. 11/29/65) of their own.

On 6/1/62 in Grand Rapids, MI Oliver Eastman married Anne/Anna Elizabeth “Eliza” Towne (b .8/22/44 NY). While it is not documented, it appears he and Anne set up household in Michigan – maybe Grand Rapids - Michigan. However, before they could start a family there was a war to be fought and won.

On 1/5/63 Oliver enlisted in the U.S. Army. His unit was company “H” of the 9th Michigan cavalry. On May 1, 1863 he transferred from the cavalry to the artillery thereby serving until the end of the war with company/battery “L” of the 1st Michigan light artillery.

Oliver’s period of service in both the cavalry and the infantry appear to have been benign or even positive as, while with the 1st, he was promoted from the rank of private to that of corporal. He would retain that latter rank until final muster.

In 1875 the Eastman family was residing in or near Dodge Center Dodge County, MN. Ten years later and into 1900 they were in Morrisville Township Crow Wing Co., MN.

Oliver’s occupation is not noted in any of these listings. It is not until 1910 that he characterizes himself as a “laborer.” That same year Anna would state that she had given birth to six children, five of whom were then still living.

Around 1901, Oliver and family left the Midwest and moved to the Puget Sound region of western Washington State where they settled in the community of Snohomish located in the county of the same name. What had drawn them there is not known.

Oliver Eastman died on 11/15/10. Cause of death was heart failure. He was 67.8 years of age.  A newspaper article chronically his death noted, “Mr. Eastman has been a familiar figure for years around the N. P. (Northern Pacific RR) depot with his basket of fruit.” Burial was/is in the Snohomish Grand Army Of The Republic (G.A.R.) Cemetery.

Oliver was survived by his wife, four sons, and a daughter after her husband’s death Anna remained in Snohomish County. In 1920 and 1930 her community of residence was listed as Snohomish (City). In 1940 she was with son Edmond and his wife in Newberg which was also in Snohomish County.