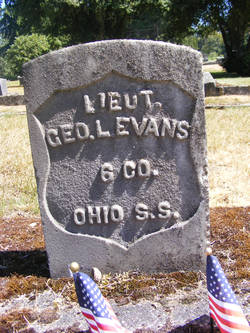 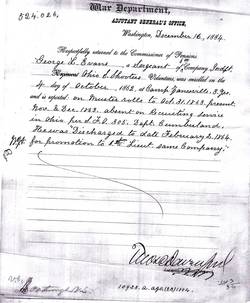 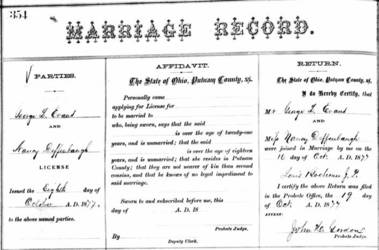 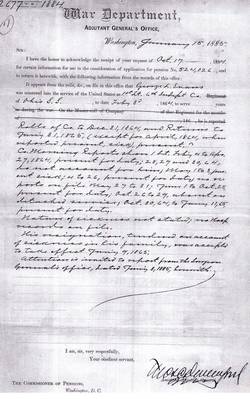 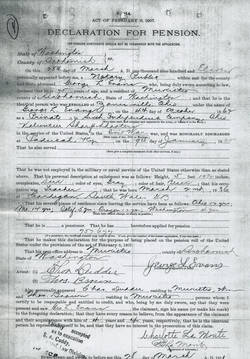 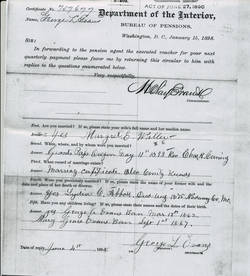 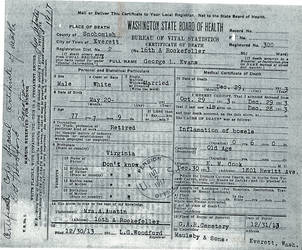 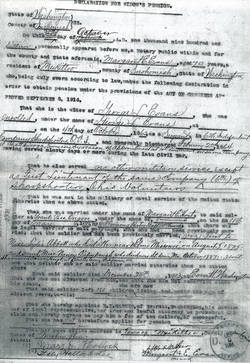 Following federal muster the 6th was one of at least three sharpshooter companies assigned to the headquarters of the Union Gen. Wm. S. Rosecrans’ Army of the Cumberland.  On 9/30/63 this army suffered a stunning defeat at Chicamauga, TN and retreated to Chattanooga where Rosecrans was replaced by Gen. George H. (The Rock of Chickamauga) Thomas.

The Ohio marksmen would remain with Gen. Thomas’ headquarters until the War’s end.  As such, the company undoubtedly participated in the 1864 Atlanta Campaign, Sherman’s March to The Sea, and the 1865 Carolinas Campaign that brought an end to four years of fighting.

NOTE: The original birth-to-death biographical profile on George L. Evans was written during the early years of the Civil War Veterans Buried in Washington State project. As a result it was restricted in both length and availability of resource materiel. The profile which follows was created in February, 2019. While it contains many more details than the original, it still lacks the depth of more recent bios which draw upon pension, military and other files found in the National Archives located in Washington, D.C.

From the birth locations of the Evans children we know that the family was in the United States by 1846. Exactly when they had immigrated from Wales to America, and why, are not known.

The U.S. Census for 1850 found George living with his parents and siblings in Newton Licking Co., Ohio. A decade later, the family was still in Ohio but then living in the Licking Co. community of Madison. By this time John had likely died as he is no longer in the household which was headed by Sarah.

Within the military the 5’101/2” darkly complexioned Sergeant Evans appears to have done well.  In late 1863 he was assigned to recruiting duty and, in early 1864 was discharged as a non-commissioned officer so he could accept promotion to the rank of First Lieutenant in his company.  Aside from detached service for recruiting, his only absences appear to have been medical.  In later years he applied for and received a government disability pension ($30 per month at death) based on rheumatism and kidney disease which he contracted in June,1864.

Effective 1/9/65 Lieutenant Evans resigned his officers’ commission “on account of illness in his family” back home in Ohio.  The nature of this family emergency is not documented.

In 1870 George, Lydia and their two children were residing in Sugar Creek Putnam Co., OH. On the occasion of this census tally George noted his occupation as “farmer.”

Lydia Evans and the couple’s fourth child died due to childbirth complications on 8/6/75. Lydia – and likely the unnamed infant – were/are buried in the London Cemetery located near the community of Elmo in Atchison County, MO.

It appears that following Nancy’s death George headed westward to California where he remained for five years.  By 1893 he had moved north to Oregon.

On 5/11/93 in Grants Pass, OR George married a third time to the previously wed Margaret E. Hoyt (nee Waller b. 1846 KY).  The couple remained in Oregon until around 1907 then resettled in the Puget Sound area of Washington, first in Mukilteo located in Snohomish County (ca. 1910) and, by 1913, Everett the county seat of Snohomish County.

George L. Evans, one time U.S. Army sharpshooter died in Everett, WA on 12/29/13.  He was aged 77 yrs. and 7 mos. Cause of death was “inflammation of the bowel” and “old age.”  Burial was/is in the Grand Army Of The Republic (G.A.R. Cemetery in Snohomish, Snohomish County.

Margaret was receiving a $40 per month widow’s pension based on her late husband’s Civil War soldiering when she died 2/12/29.  She was/ is buried beside George.