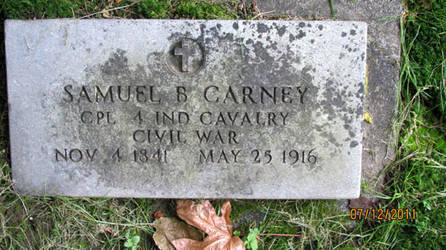 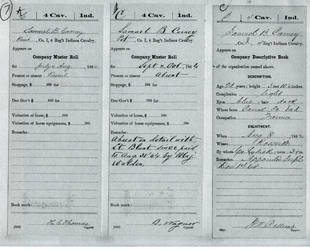 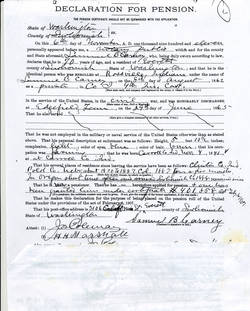 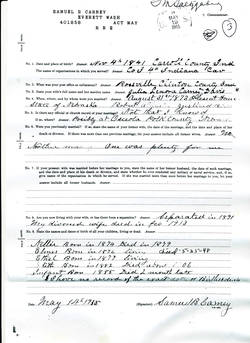 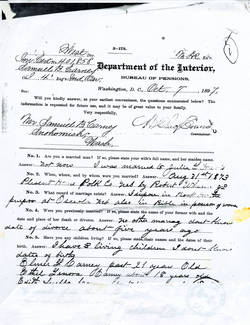 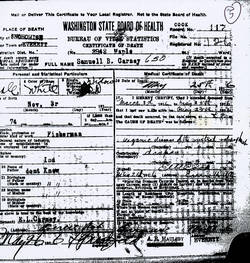 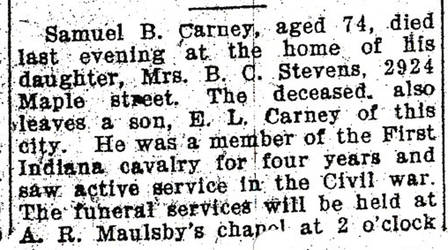 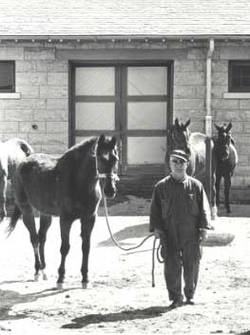 The seventy-seventh regiment, a three year "western theatre" unit that subsequently became the 4th Indiana Cavalry left the state immediately following Federal muster with one four company battalion proceeding to Henderson, Kentucky, a second to the interior of Missouri via Louisville, and a third, after a brief stay in Madison, IN, to Kentucky and thence to Tennessee. In December this third contingent was involved in a vicious fight with Rebel forces near Munfordville.

In January, 1863 the regiment, with the exception of Company "C" which was tapped to serve as Union Gen. A. J. Smith's escort, a role it would play until 1864, was united. It then moved with Union Gen. Rosecrans' army for Tullahoma and Chattanooga, TN, seeing action at Chickamauga. A November 1st fight at Fayetteville, TN capped the combat year.

The winter of 1863/'64 was passed in East Tennessee. During this period the 4th held an advanced position in all cavalry movements including a severe fight at Fair Garden.
March, 1864 found the regiment joining Union Gen. W. T. Sherman's forces for actions in the Atlanta, GA campaign. Actions during this period included Varnell's Station, Burnt Church, at Newman, the McCook Raid and in all moments of that expeditions. After the fall of Atlanta it marched back into Tennessee and, in October, was engaged at Columbia.

The first month of 1865 found the unit near Nashville, TN, while February had them in Alabama. In that state it engaged in Wilson's raid and saw April action at Plantersville and Selma.

Nothing is known about Samuel's childhood, formative or teenaged years. Nor has he been found in the 1860 census. Likely, however, he was still in Indiana as it was there in August, 1862 the 5' 10  or 10 1/2", light complexioned, blue eyed, brown haired Sam, then noted as a farmer, enlisted in the U.S. Cavalry.     Even in those early years of the war when entrance into the military was fueled  by patriotic fervor rather than the draft or, as later, significant enlistment bonus or "bounties", monetary inducement was a part of the enrollment process as Samuel appears to have been promised a $100 enlistment payment $25 of which he apparently received "up front." $100 was a significant sum of money in days when the typical Civil War soldier's pay was $13 per month.

The organization private Carney initially joined was Captain Austin's Company, which subsequently became company "I" of the 4th Indiana Cavalry. He was to remain with that company and regiment throughout his military tenure.

As documented, Samuel's army service was to prove fairly benign. He was listed as "present for duty" up until June, 1863 when he may have sick and was hospitalized, first in Murfreesboro and later in Nashville, TN at least until sometime in September. The nature of his illness, if any, is not known, but it was apparently not serious as during the same period he is listed as being employed as a nurse in #19 U.S.A. General Hospital, Nashville, TN.

1864. March to May show private Carney, dismounted and on detached service at Cleveland,  TN. Mid year found him with Union Gen. W.T. Sherman marching toward Atlanta, GA. During that campaign at Newnan, GA he was reported to be "missing in action," not returning to his unit until August 20th which was then at Cardnersville, GA. No details on his absence are available.

September and October, 1864 note private Carney absent from his company on detached service with Lt. Blunt. Available documentation points to this assignment to have been caring for unserviceable horses. As an apparent reward for his dutiful service on 12/1/64 private Carney was promoted to the rank of corporal.  The remainder of Samuel's service appears to have been quiet. His muster-out notations reflect only financial settlements for clothing, owed, plus monthly pay and enlistment bonuses due.

The war behind him Samuel returned to Rossville, Indiana. The census for 1870 found him there farming with a stated worth of $2500. Also in his home was his then 66 year old mother, Sophia. That same year, however, he packed up and moved to Nebraska. Perhaps his mother had died.

In 1887 Samuel left Nebraska for Colorado where remained only five months before continuing westward to the state of Oregon. The following year he headed northward to Snohomish, Snohomish County in the western portion of Washington Territory/State where he would spend the remainder of his years.

If available documentation is correct, one would believe that Julia travelled westward with her husband with the two remaining together until 1891 when they separated. A divorce came the following year. Julia would die in 1913.

Samuel's whereabouts at the time of the 1900 census are not known, but a decade later he was noted as residing in Holmes Harbor, Island County, WA, divorced, but having his own income. Whether that income was strictly from a U.S. Government disability pension he had requested in 1897 and was subsequently granted, based on ailments/illnesses tracing back to his days of Civil War soldiering, is not known. It is interesting to note that in the documents filed petitioning for the pension, one question asked if he was a widower or divorced had he remarried. Samuel's written response to the inquiry was: "No other marriage, one was enough for me." At death former trooper Carney was receiving a $24 per month pension stipend.

By 1911 Samuel had returned to the Washington State mainland and was living at 3106 California St. on the shores of Puget Sound in the city of Everett.  With whom, if anyone, he was living at the time is not known. The address, however, would not prove to be his last as in 1915 he was found in Rural Route 2, Everett. Obviously, at that time, he was no longer residing within Everett City proper.

Samuel B. Carney died on 5/25/16 at 2942 Maple in Everett in the home of his daughter Ethel. Cause for the passing of the 74.6 year old former Civil War soldier was listed as organic disease of the heart, specifically one of the heart valves, with dropsy contributing. His occupation at death was listed as "fisherman." Burial was in Everett's Evergreen Cemetery.