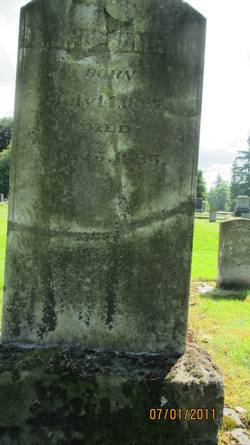 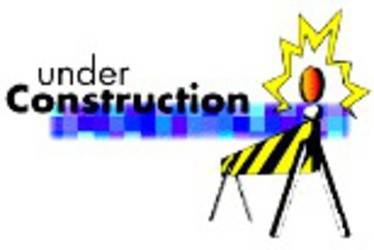 Under Construction at this time 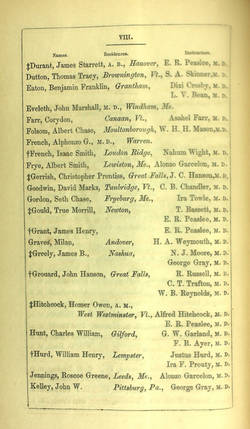 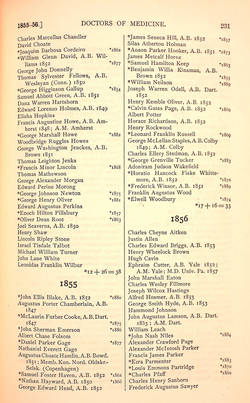 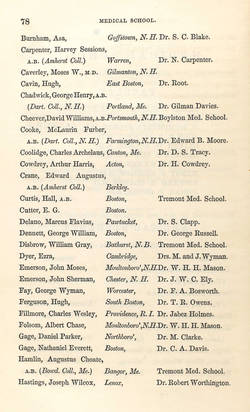 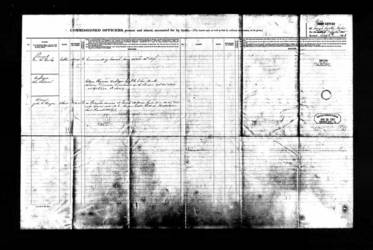 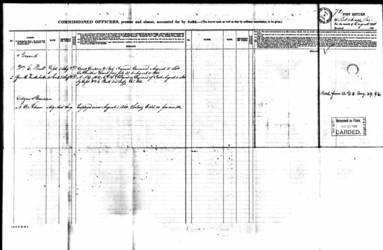 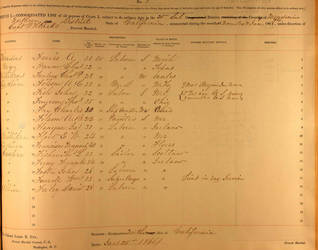 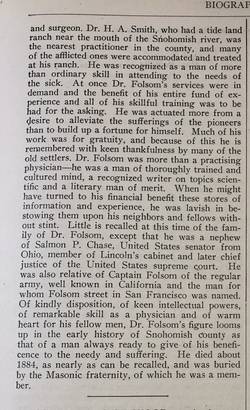 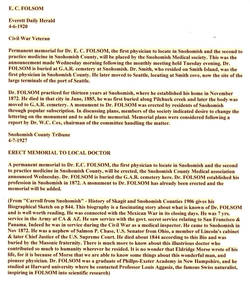 Doctor Albert Chase "Doc" Folsom is buried in Snohomish, WA's Grand Army Of The Republic (G.A.R.) Cemetery. In the late 1990s his headstone was found smashed and broken atop his final resting place.

Gathering up the headstone pieces almost a year was spent piecing them together into a restored marker. With reconstruction nearing completion, a re-dedication of the stone was planned which would feature biographical profile of Dr. Folsom's life. Information for that dedication was primarily based upon the doctor's obituary which had been written by friend and colleague, Snohomish County's first practicing attorney and Civil War veteran, Eldridge Morse. The obituary and subsequent research presented an enigmatic picture of the doctor, perhaps raising more questions than it answered. His life experiences sounded almost too fantastic to be true.  Was Folsom really a trained physician? Was he a secret service agent? Why did his headstone have G.A.R. on it when no proof could be found of the doctor having served in the military? Even a doctoral thesis by a student at the University of Washington left open the question: Was this man a Wizard Of Oz? Was he a fraud?

Thankfully, as the years have passed, because of the World Wide Web, a great deal of new information has become available which sheds new insight into "Doc" Folsom's history. In doing so, it has thrust aside many of the dark clouds which have shrouded this man's history, image and legacy.

Even with new insights, however, trying to reconstruct the life of Dr. Albert Chase "Doc" Folsom has proven more of a challenge than piecing together his tombstone. It is a project that has spanned 20 years and even after all that time one is left feeling like trying to fit together a jigsaw puzzle with too many pieces that just don't seem to fit within the puzzle's (timeline) border. For example, in Eldridge Morse's eulogy presentation there are references to Doc graduating from Harvard near the end of the Mexican/American war accepting a U.S. Army commission and having contact with Captain Robert E. Lee prior to his travelling to California in 1848 or '49. These allegations and their timing do not fit into the available census data-based timeline presented herein. Perhaps in the future there will be more revelations pertaining to the good doctor which will clarify these inconsistencies.

Albert Chase Folsom was born in New Hampshire. His birth month was July. His birth date was the 14th. There are, however, two birth years. According to family sources he was born in 1827, but U.S. Census data and other records lean more towards 1829/'30. Herein we are adopting the latter window, specifically, 1829.

Albert's father was Dudley Connor Folsom (b. 2/29/79 Gilmanton Belknap Co., NH – 8/12/58 Gilford Belknap Co., NH.).  During the War of 1812 Dudley served as a corporal in Captain Courson’s New Hampshire Militia. Although there are documental references to Dudley being referred to as “Captain,” the designation may have been an honoraria rather than his actual military rank. At some point in time Folsom- who may have been a medical doctor - moved his family from New Hampshire to Massachusetts.

On the Folsom side of family A.C. was related to Joseph Libby Folsom (b. 5/19/16 - d. 7/19/55). Libby was a captain in the regular U.S. Army. He became well known in California as an explorer, businessman, city founder and surveyor of San Francisco. He was also the first (tax) collector of the Port of San Francisco (1847 - 1849) when it came under American rule during the Mexican/American War. Named for him in California is Folsom Street in San Francisco, Folsom Prison, Folsom Lake and the city of Folsom. At age of 39 Joseph Folsom died suddenly while visiting friends at Mission San Jose. This relationship connection could help explain A.C.'s strong California connections.

Educationally, Albert's early years were spent attending the prestigious Phillips- Exeter Academy, a boarding school located in Exeter Rockingham Co.  New Hampshire. By 1850 he was residing with Sister Hannah in Moultonborough Carroll Co., NH while studying at nearby Dartmouth College. A.C. graduated from Dartmouth in 1855.

The following year Albert moved on to graduate work at Harvard College in Cambridge, MA. There he came into contact with Professor Louis Agassiz (b. 5/28/07 - d. 12/4/73). "The famous Swiss naturalist, and the bent of young Folsom's mind was by him turned into the channels of scientific research." According to the Boston Medical and Surgical Journal, A.C. graduated from Harvard's   Massachusetts Medical College after presenting a dissertation on the "Chemical Nature of Disease".

Exiting Harvard (ca. 1856) with a medical degree, Dr. Folsom accepted a 2nd Assistant Surgeon's commission in the U.S. Army. Assigned to the 4th U.S. regular infantry he received orders to report to New Orleans, LA and await there for orders  to move west to the Presidio in San Francisco, CA. Arriving in California, Dr. Folsom spent some nine months along the California/Oregon border during the (1855/'56) Rogue River Indian Wars.

During the years before America's Civil War Dr. Folsom reportedly also worked with the U.S. Army Secret Service travelling on steamers between San Francisco, Panama, Costa Rica and Grenada keeping his eyes and ears open to the maneuverings and machinations of pro - slavery southerners bent on making California slave state and taking it out of union if and when civil war broke out.

In all, Dr. Folsom  spent seven (est. 1856-1863) years in California/Arizona region before resigning his U.S. Army commission (but keeping his secret service commission) in order to return east and do post graduate work in medicine at his old Harvard alma mater. At the conclusion of this work, having completed with honor and attainment no less than three courses of medical investigation and research, he received a "Diploma Addendum” the highest honor granted by Harvard.

After graduation Doctor Folsom then apparently spent some time in Europe Returning to U.S. from his travels the good doctor may have practiced medicine for a time Wisconsin before moving on to California, the scene of his former labors as an army surgeon.

By 7/1/63 Doctor Folsom was married – the name of his bride remains an unknown - and residing in the community of Big River located in northern California's Mendocino County.  Thirteen months later, on 8/1/64, he became U.S. Army Citizen Physician. He was first stationed at Ft. Bragg on California’s pacific coast. He then served with California volunteers as a medical inspector.  In this line of work for which his previous service in the regular army fitted him he was compensated $125 per month. His first duty station was, again, Ft. Bragg, but by 10/22/64 he was serving from Camp Curtis. He apparently remained at this post at least through May, 1865 after which he apparently returned to doctoring in Big River. It was there he was practicing in the latter part of June (22nd), 1866.

Exactly what had occurred in this man's life between 1866 and 1872 that prompted this intelligent and 'well-connected" doctor to choose to abandon northern California and settle in the Puget Sound wilderness is not documented. As the 4th U.S. Infantry had elements stationed in this area prior to the Civil War, perhaps he'd had opportunities to travel here and liked the region. On the other hand, based on hints that he may have been "fleeing an unfortunate second marriage" entered into following the death of his "first wife", he could have been seeking an out - of - the - way location where he could "get lost."

Doctor Folsom was the second physician to practice in Snohomish County and the first to reside in Snohomish City. The fact that his services were free to all regardless of ability to make immediate payment endeared him to the local populace. However, the kindly doctor's practice did not sit well with other medicos attempting to set up practice in the area. Newcomers "bitterly" complained that his (Folsom's) habit of collecting only what a patient could voluntarily pay spoiled the region for those who desired to make a living via their profession.

During the next five to six years all went well for "Doc" Folsom. As a respected member of the community he was elected county coroner and sat as co-superintendent of the local school district. In addition to helping build up the Snohomish museum he assisted in the organization of that city’s Athenaeum Society * which was said to be the most notable organization of its kind in Washington during its territorial days.

Unfortunately, the beginning of the end was around the corner. During the winter of 1877/'78 a severe diphtheria epidemic hit western Washington. Although Harvard may have provided the good doctor with the best professional training available for the times, the unfortunate epidemic occurred prior to the full development of the science of bacteriology.

As a result, while "Doc" scanned current medical literature for information to assure his patients as correctly as he could, "by the autumn of 1878 all but two children of twelve in the local school district had died." This tragedy coupled with an injury sustained in a fall prompted Dr. Folsom to terminate his practice and, for all practical purpose, his life. Doc Folsom's final three or four years were reportedly, for the most part, not pleasant.

The doctor's friend and fellow professional, attorney Eldrige Morse noted: "Failing both physically and mentally, he seemed to have no desire of life and made no effort to prevent the approach of death." Morse went on to say "His last sickness was long and painful (so) when death came it was welcomed by his friends as real relief from his suffering."

Albert Chase "Doc" Folsom died 5/15/85 of dropsy (edema). Edema is characterized by an excess of watery fluids collecting in the cavities or tissues of the body. Likely Doctor Folsom's kidneys had ceased to function. At death he was aged 57 years, ten months and one day. He was, supposedly, survived by an unnamed daughter.

Doc Folsom was buried in the old Snohomish (Pioneer) Cemetery along Pilchuck Creek. More than a year after death a public subscription (fund raising pledge drive) was taken (initiated) to erect a monument to his memory for......"countless acts of sympathy and benevolence and for his cheerful attendance upon the poor, the sick and the unfortunate for a long series of years."

The monument of handsome Italian marble arrived in Snohomish in June, 1887 and was erected in the old Snohomish Cemetery. It's fate, however, is unknown. Sometime between 1898 and 1927 "Doc" Folsom’s remains were moved to their present location in the Snohomish Grand Army Of The Republic (G.A.R.) Cemetery. The monument apparently did not make the move as that is not the reconstructed headstone that, today, marks his final resting place.

In closing, it deserves to be noted that the original "Doc Folsom" biography created in 2000 to commemorate the dedication of his reconstructed headstone lead to the "Adopt - A - Vet" (Snohomish) project and, ultimately the Civil War Veterans Buried In Washington State website which contains birth-to-death biographical profiles of American Civil War veterans who are buried in our state.  In this sense more than one hundred years after his passing Dr. Albert Chase Folsom is still bringing "life" to his Civil War comrades.