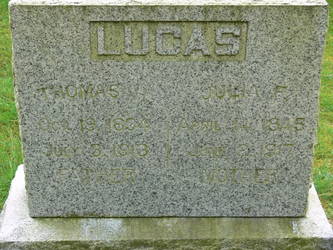 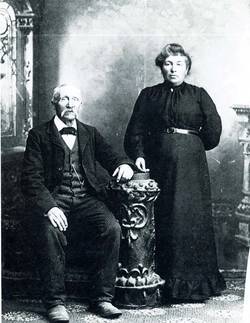 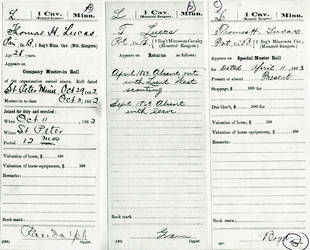 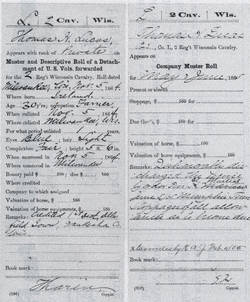 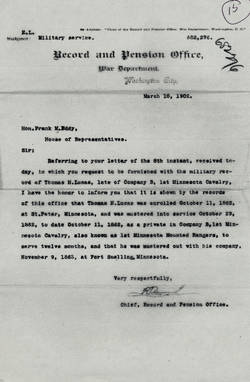 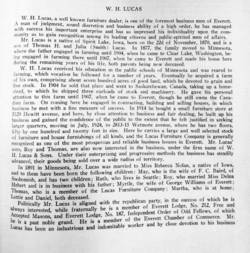 This one year, 12 company, cavalry regiment also known as the Mounted Rangers, was organized in the fall of 1862 and was composed primarily of men who had lost their wives, children or relatives in the Sioux uprising that terrorized Minnesota the previous August and September. The first battalion of three companies’ was sent into the field as soon as organized and assigned to guard and patrol duty.

During the spring of 1863 nine companies of the 1st assembled at Camp Pope, one mile northeast of Redwood Falls, MN, for the Campaign of the Missouri (River).  This portion of the regiment then moved into the Dakota Territory where it was in the battle of Big Mound. During this battle one of battalions led an attack up a steep hill, put the hostile Indians to flight and followed them for fifteen miles.  The regiment was next in the battle of Dead Buffalo Lake and was at Stony Lake when the Indians attacked in great force.  On July 29th the nine company regiment reached the Missouri River then moved to Ft. Abercrombie in present day North Dakota.

Leaving Ft. Abercrombie, several companies were sent to Ft. Ridgley, MN which was reached on September 1, 1863. The first battalion was also then sent to the fort. The companies of the 1st were mustered out during the fall and winter of 1863/'64 having never fired a shot at Johnny Reb.

This three-year "western theater" regiment left Wisconsin 3/24/62 for Benton Barracks near St. Louis, MO.  Once there it was mounted and equipped before being ordered to Springfield in May.

Arriving at Springfield, the unit’s second and third battalions were sent to join Union Gen. Curtis' army at Augusta, Arkansas.  From there they moved to Memphis, Tennessee and, in June to Snyder's Bluff, Mississippi where they remained during the siege of Vicksburg.  During this period they joined Union Gen. W.T. Sherman's July expedition to Jackson, Mississippi then returned to Redbone, located some ten miles from Vicksburg.

Turning to the 1st battalion, it was stationed at Springfield and Cassville, Missouri alternately until October of 1862 when it went to Osage Springs, Arkansas. It was to remain there until December until being stationed at Forsyth, Missouri until the latter part of March, 1863, when it moved from there to Lake Springs before, in September, 1864 joining the other two battalions at Vicksburg.

While at Vicksburg, the regiment was on picket duty until November 6th when it joined an expedition to Gaines' Landing, Arkansas.  It subsequently went on a three hundred mile campaign trek destroying bridges, railroad tracks, cotton and other Rebel supplies.  During this period a 240 man detachment of the unit engaged a considerable force of the enemy near Yazoo City, Arkansas.

On December 10, 1864 the regiment was ordered to Memphis, Tennessee and from there joined an expedition into Mississippi once again destroying  much railroad property, bridges and stores while defeating Confederate forces in a severe action at Egypt Station, MS (12/28/64) during which five hundred prisoners were captured.   Those captives were then placed under the charge of the 2nd. The command next marched through to Vicksburg destroying the enemy's lines of communication before returning to Memphis.  Soon thereafter it participated in two similar expeditions without notable incident.

On May 9th of 1865 a detachment of 330 was sent to Grenada, Mississippi for garrison duty. It remained there until June 24th when it rejoined the regiment at Alexandria, Louisiana.  After this the 2nd marched to Hempstead, Texas where it went into camp.  Thereafter, at Austin, it was mustered out U.S. service and into history.

ED. NOTE: The birth-to-death biographical profile which follows is an updated version of a bio posted in 2016. The updating was done in November, 2018 based on new family-related information coming to light.

Very little information is available pertaining to the early life of Thomas H. Lucas, particularly his time in Ireland where he reportedly was born on October 19, 1834. There is no documentation pertaining to his parentage, childhood, teenage or early adult years. Even that the initial H stands for is not known. Also not known is when and why he left the country of his birth and came to America.

The first specifics we find for Thomas are from the year 1862 when, on 10/11 in St. Peter, MN he enlisted in the U.S. military for a period of twelve months, thereby becoming a cavalryman in company "B" of the 1st Minnesota Cavalry. While in the 1st Private Lucas' service record was somewhat checkered. During the first two months of 1863 company rolls show him present.  In March and April he was absent, but legitimately so as he was on detached duty scouting with company "B's" Lieutenant Thomas F. West. In May and June he was listed as present, but in trouble as on 6/5 he was the focus of an undefined regimental court martial which resulted in his being sentenced to a $5 pay stoppage. At a time when a private soldier's monthly pay as $13, this was quite a sizable penalty. Present for the remainder of his enlistment, after settling financial accounts with Uncle Sam - $44.15 for clothing, one cone wrench, one watering bridle and one nose bag- he was mustered out of the service.

Where Thomas resided and what he did for the next year is not known. He is next heard from when, on 11/5/64 as a resident of Milwaukee, WI he again enlisted in and was mustered into the military, this time as a private in company "L" of the 2nd Wisconsin Cavalry. During this enlistment we learn a bit more about Thomas as his vital statistics were noted as follows: Age =30 yrs.; Height = 5'6"; Complexion = fair; Eyes = Blue; Occupation = farmer and/or farrier. For this one year enlistment he received a $100 bonus, or "bounty", $33.33 of which was paid him immediately with the balance to be received in later increments.

Private Lucas’ second term of enlistment would prove to be much less satisfactory than his first. Firstly, in December, 1864 while stationed at or near Ft. Pickering located near Memphis, TN he experienced two brief hospital stays for diarrhea/dysentery. . Secondly, from March 31, 1865 through April 12, 1865 he was again hospitalized for dysentery. Thirdly, from April 9th through the 30th he had a more lengthy hospital visit for what was characterized as intermittent fever. Fourthly, during his same period he was docked one half month's pay on the basis of some undetailed field court martial. Finally, on May 1, 1965 while detailed on  guard duty at the 2nd Cav's divisional headquarters in Memphis, TN he left his post without permission, returning drunk several hours later. When then ordered by the Corporal of the Guard to remain at his post, Private Lucas again went absent without leave, did not return to his post and remained absent for the afternoon and the night. Placed under arrest, he spent at least some time in the base prison hospital. Being AWOL led to general court martial proceedings during which the private pleaded guilty to both the alleged charge and

“Specification”. Based on this, on 6/5/65, Private Lucas was stripped of all pay due him and dishonorably discharged from the army.

While Thomas' exact whereabouts and activities are unknown immediately following his dishonorable separation from the military, it appears he likely returned to Minnesota where he married Julia Smith (b. 4/14/1845 OH). The U.S. Census for 1870 found Thomas (a farmer) and Julia in Tusculum, Dickinson County, Iowa. By this time Lucas' had a family consisting of one girl Alta "Alice (b. unk. MN), and one boy William H. (b. 11/22/70 Spirit Lake, IA).

Between 1873and 1875 the Lucas family moved. On this occasion they departed Iowa and returned to Minnesota where, apparently, they took up farming in Winnebago City located in Faribault County.

1880. Another decade. Another census. In this tally the Lucas' were still located Winnebago City, Faribault County, MN. By this time three new names had been added to the household: Talbot/Talbert "Burt/Bert" Lucas (b. 1873 IA), Thomas Homer Lucas (b. 1875 MN) and Ida Lucas (b. 1877 MN). As evidenced by these children's birth states, the Lucas family quitted Iowa for Minnesota sometime between 1873 and 1875. However, what prompted the move is not known. The family would remain in Minnesota until 1907. During at least a portion of that Minnesota period they would reside in Becker County on or near Shell Lake. The family would then move westward to Washington State.

Documentally, it appears that by Mid-August of 1898 Thomas had initiated the paperwork to try and seek a U.S. Government pension based on his Civil War military service. While it is not specifically noted, likely this movement was based on his early service with the 1st Minnesota which had ended on a positive note.  That the process did not proceed smoothly is evidenced by the fact that by early March of 1902 he had sought the assistance of Frank M. Eddy U.S. Representative for Minnesota's 7th Congressional  District  (R 3/4/95 - 3/3/03). Congressman Eddy subsequently penned a letter to the U.S. War Department's Records and Pension Office seeking documents pertaining to former private Thomas' service with the 1st. The Department responded with a letter describing Thomas' first term of service, but what transpired after that is not known. What is known is that by late January, 1905 Thomas was again seeking U.S.  Congressional help in the pension process, this time via Minnesota's H. Steenerson (R. 3/4/03 - 3/3/23, 7th District). Once again the War Department's Pension Office replied with a chronology of Thomas' service both in the 1st and in the 2nd. Available documents are silent on whether or not a pension was or was not granted, but likely it was not.

As previously noted, in 1907 Thomas, Julia and their two newest children Ralph (b. 1888 MN) and Seva (b. 1872 MN) quitted Minnesota and resettled in Everett, Snohomish County, WA.  While the motivation for the move is not documented, likely it was to be near to their older, married children - and their families - all of except one who was living in Minnesota -  were living in western Washington. The Everett the City Directory for 1911 noted Thomas' occupation as "farmer." At his death, Thomas' Everett address was listed as 1532 Virginia St.

After her husband's passing, Julia remained in Everett, WA. She died there on 6/2/17 at age 72.1 yrs.  She was/is buried at Evergreen beside Thomas.