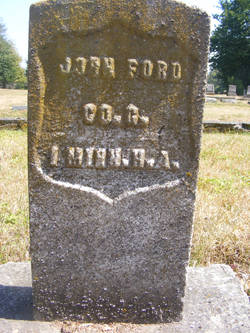 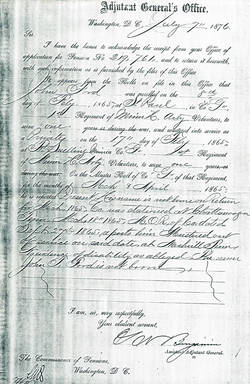 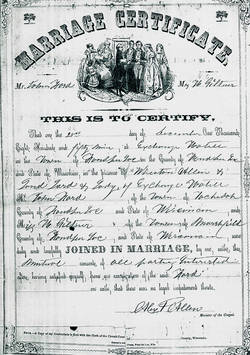 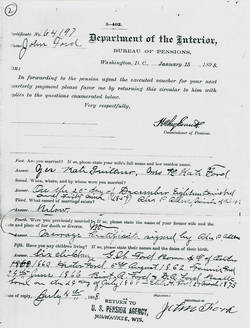 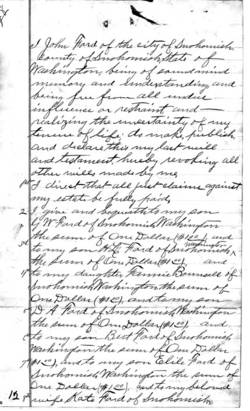 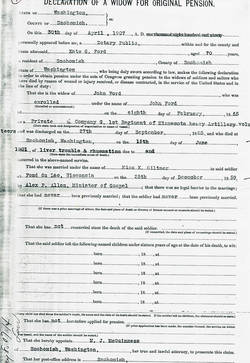 Note: This is the same regiment and company as Eli Hewitt, Row 2 Grave: 1 and Elisha Nye, Row 12 Grave 2 Grand Ary Of The Republic (G.A.R.) Cemetery in Snohomish, Snohomish Co., WA)

The 1st MN H. A. was organized during the summer of 1864. Mustered in by companies, the regiment was ordered to Chattanooga, TN during the winter of the same year.

Composed of 12 companies of 140 men, the unit was placed in charge of heavy guns in forts- a “responsible position” because it was thought Gen. Hood’s Confederate forces would attempt to retake the city now under Federal control. The 1st remained in Chattanooga throughout its tenure.

(Note:  The original birth – to – death biographical profile on John Ford was written during the early years of the Civil War Veterans Buried In Washington State project. As a result, it was limited in both size and the availability of research sources. The biography which follows was created in February, 2019. While it contains much more detail than the original, it is not as in-depth as many of the more recent additions to this site which draw extensively upon pension, military and other documents housed in the National Archives located in Washington, D.C.)

John Ford was born in New York State during the year 1836. No birth month or date has been located in available documentation.

As noted by the birth states of their children, John and Kate started out life together residing in Wisconsin. In 1860 the U.S, Census found them farming in or near Empire Fon du Lac Co, WI. A decade later they were still in Wisconsin, but had moved and were farming in or near Sumpter McLeod Co, MN.  They appear to have remained there until ca. 1887 when they headed westward to Washington Territory where they settled in or around Snohomish located in Snohomish Co. in the western part of that territory. When, exactly, the move had been made and what prompted it is not known. Perhaps, however, it was siblings or adult children living in the region and the lure of new farm land.

John’s military service  was with the 1st MN Heavy Artillery. Once in Federal service with the 1st Private Ford’s entire enlistment, like that of his unit, was served in Chattanooga, TN. In later years John would draw upon his time with the 1st to apply for and be granted a U.S. Government disability pension based on illnesses or ailments which he traced back to his days of Civil War soldiering. At passing his stipend was $24 per month.

It was in Snohomish, Snohomish Co., WA on 6/4 or 15/01 the former artillery private succumbed to liver trouble and rheumatism.  John Ford, dead at age 67 years, was survived by his wife, four sons and one daughter. Burial was/is in the Snohomish Grand Army Of The Republic (G.A.R.) Cemetery.

After her husband’s death Kate remained in Snohomish County. In 1920 she was a boarder in the Everett Snohomish Co., WA home of a nurse named Mary E. Culer.

Mrs. Ford passed away on 10/20/21. At the time of her death she was receiving a monthly stipend of $30 based on her late husband’s Civil War pension. She was/is buried next to John in the Snohomish G.A.R. Cemetery.