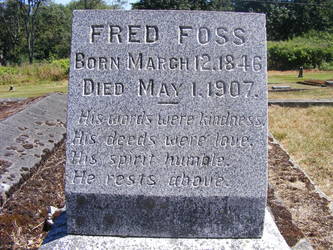 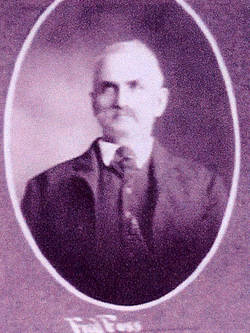 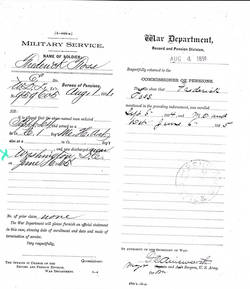 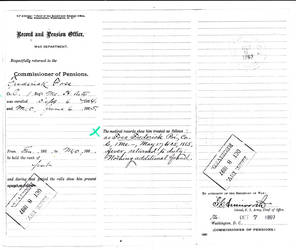 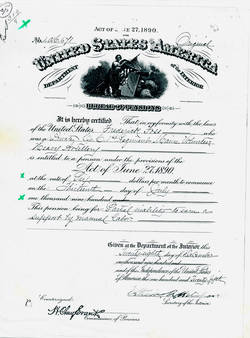 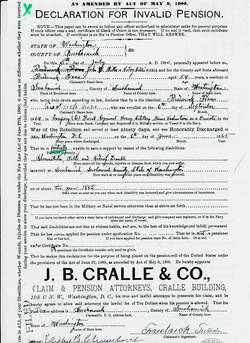 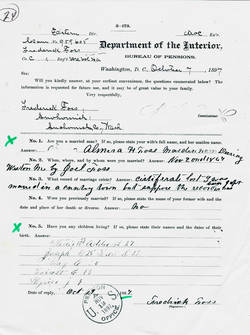 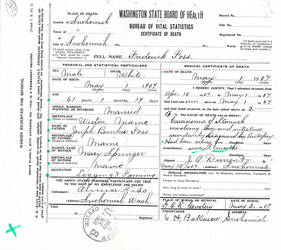 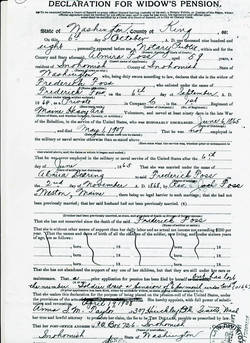 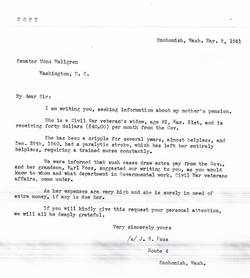 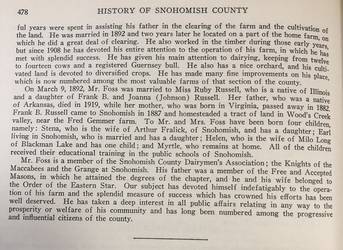 Originally formed as the 18th Infantry, this three year regiment was, after five months of service, changed to heavy artillery by general order No. 62. The unit was stationed in the defenses of Washington D.C. until February, 1864 when two new companies brought manpower strength up to 1800 and transfer to the Army of The Potomac.

Arriving at Belle Plain landing on 5/15, the 1st came under fire four days later when it took a prominent role in repulsing a heavy enemy attack on supply trains near the Fredericksburg Pike. In this action the regiment suffered severely, losing 468 killed, wounded or missing.

After taking part in the Grand Review in Washington it appears the unit remained there until final muster. On 9/7 the unit returned to Bangor where, 13 days later the men were paid and sent home.

ED. NOTE:  The original birth-to-death personal biography on William T. Adams was written during the early years of the Civil War Veterans Buried In Washington State project. It was limited in both size and in terms of available resources to draw upon for research purposes. The profile below was written in May, 2018. While it contains much more personal information l than the original, it still suffers from a lack of details that can only be gleaned from documental files available from the National Archives in Washington, D.C.

Frederick Foss, son of Joseph Bunker Foss and Mary Springer was born 3/21/46 in Weston, ME. Weston is a central ME Town located near the New Brunswick, Canada border. No information is currently available on possible siblings or his childhood years.

On 9/6/64 the now eighteen-year-old 5’ 11” farmer accepted a $200 Government bounty and joined the U.S. Army. During the ensuing winter, while in front of Petersburg, VA he contracted inflammation of the bladder and scurvy, the latter resulting in the loss of all his teeth. He later reported that rheumatism plaguing him at the time of his 1865 discharge prevented his performing “a day’s work” for the next year.

Mr. Foss was a farmer and woodsman in Maine and appears to have moved to the Snohomish area around 1873 via Railroad to San Francisco, CA and then boat to Seattle and Snohomish area. His family came a year later.  Fred became “prominent as a businessman, rancher and logger. By 1885 ailments tracing back to Fred’s military service days begin taking their toll on the aging veteran. As such, in 1890 he applied for a government partial disability pension focusing on catarrh (infection) of the bladder, rheumatism and kidney disease, plus “lesser” ailments including no teeth, neuralgia of the stomach and blind piles. By 7/00 he had begun receiving a monthly stipend of $6.

His physical condition, however, continued to deteriorate as a 1903 document notes he was only able to “support a small part of a day’s work.”  The Everett Daily Herald of 5/1/07 noted as follows: “Fred Foss a pioneer of this city and owner of extensive logging works on Whidbey Island died at 1:30 this morning at the home of his daughter, the wife of Hon. B.H. Morgan, ave. B. Mr. Foss was taken sick on the island about five weeks ago and was brought home. He died from complications of (carcinoma of stomach, liver and intestines) diseases.” Frederick Foss was aged 61 years, 9 months, and 1 day.

Almira Foss did not remarry following the death of her husband. In 1941 a paralytic stroke placed the then 92 year old under “constant” care of a nurse. She died 12/8/42 in Concrete, WA.