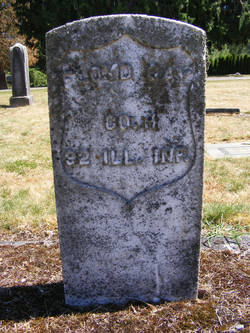 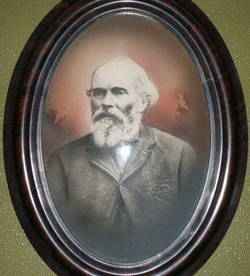 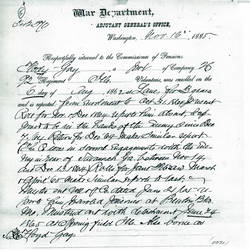 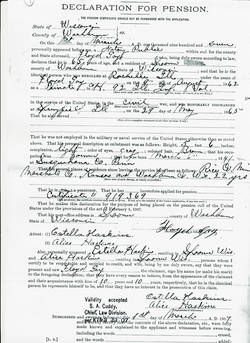 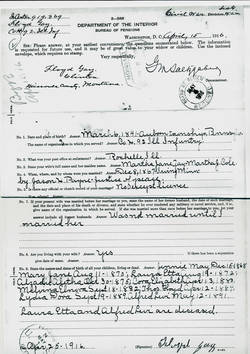 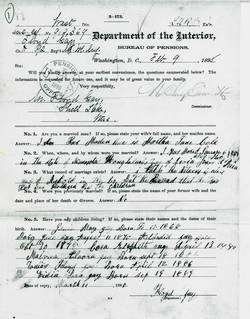 In October, 1862 the 92nd a three-year “western theater” regiment had to leave its comfortable barracks to help protect Cincinnati, Ohio. It ended the year in Kentucky where it drove the rear guard of Confed. Gen. Braxton Bragg’s rebel army from Camp Robinson. In March, 1863 the 92nd participated in the movement that pushed Confed. Gen. Van Dorn south of Columbia, TN.

At mid-year a contingent of the unit joined an expedition to scout the countryside for horses. In four days enough horses and mules were acquired to mount the entire regiment. From this point onward the 92nd would function more as a mounted infantry or cavalry unit than foot infantry.

September found the unit atop Lookout Mountain carrying word to Union Gen. Rosecrans that the rebels had abandoned Chattanooga, TN. Shortly thereafter they were the first Federal troops to enter the city. 1864 found the 92nd busy on several Tennessee fronts.

Also, that fall it participated in all movements of Kilpatrick’s cavalry during the long campaign that resulted in the capture of Atlanta, GA. The unit then took part in all the cavalry battles during Union Gen. Sherman’s march to Savannah and, afterwards, against Confed. Gen. Johnston’s army in the Carolinas. The war at a close, the 92nd was disbanded.

NOTE: The original birth – to- death biographical profile of Floyd Gay was created during the early years of the Civil War Veterans Buried In Washington State project. As a result, it was limited both in size and in terms of research resources. The biography which follows was written in February, 2019. While it contains more details than the original, it still falls short of the depth found in more recent additions to this website which draw heavily upon pension, military and other veteran – related files housed in the National Archives located in Washington, D.C.

Floyd Gay was born March 6, 1841 in Auburn Co., PA. While there is no documentation to collaborate the fact, his parents were likely Moses (b. 1/8/1820 Luzerne, PA) and Lydia/Ledia (nee Whipple b. 4/21/1891) Gay. Beyond having at least one sibling, a sister, no additional details are available pertaining to his birth family

In the late summer of 1862 Floyd, a 5’6” gray-eyed farmer joined the U.S. Army.   His military experience appears to have been uneventful until 1864 when, following the fall of Atlanta, GA, Union Gen. Wm. T. Sherman’s troops cut loose from their base of supplies and began marching toward Savannah and the sea.  On 12/8 during one of several cavalry engagements in the rear of Savannah Private Gay was captured by the enemy.  For all practical purposes the war was over for Floyd Gay.

Private Gay remained in Rebel hands until paroled at Northeast Ferry, NC on February 26, 1865.  The remainder of his army tenure was spent at College Green Barracks, MO where he arrived on March 5th and at Benton Barracks, located near St. Louis, MO where he arrived March 14, 1865.  At Benton Barracks he was ordered to the Chief Muster Officer to await final separation from Federal service.

As noted by the birth state of the Gays first born, Jennie May, Floyd and Martha appear to have initially settled in Illinois. At the time of the 1870 U.S. Census the Gay family’s community of residence was noted as Pine Rock Ogle Co., IL. There Floyd’s occupation was listed as “farm laborer.”

At some point between the census of 1870 and the birth of daughter Laura in August, 1872 the Gays quitted Illinois in favor of Minnesota. Where they resided in that state is not documented but they would remain there at least until the end of October, 1875 when Alsadie was born.

By1880 the Gays had left Minnesota for Kansas. It was in the latter state that 1880 census takers located the family. Their community of residence was Marysville located in Marshall County. There Floyd’s occupation was noted as “stone mason.”

The Kansas stay was not lengthy as by September of 1882 when Melvina was born she came into this world in Bridgewater Rice Co., MN. The reason for the move is not documented.

Two years later when son Floyd Thomas was born the Gays had moved again. At that time they were living in or near the community of Bashaw located in Washburn County, Wisconsin. Their stay in Washburn County would be lengthy as they were there for twenty two years. While in that location Floyd’s occupation was, once again, “farmer.”

As of 1910 the Gays were still residing in Wisconsin and in Washburn County. They were, however, no longer in Bashaw, but farming in Chicago.

By April, 1916 the Gays had moved westward from Wisconsin to Missoula Co., Montana. From there, circa 1921, Floyd and Martha moved to the Roosevelt District of Snohomish, Snohomish Co., WA.  Likely the last move was made to be near the families of a number of their adult children already residing in the area.

Martha Gay died March 16, 1923 at her home in the Roosevelt District of Snohomish, Snohomish Co., WA. Burial was/is in the Grand Army Of The Republic (G.A.R.) Cemetery in Snohomish.

The U.S. Census for 1930 found Floyd residing in what was likely his Roosevelt District home, but that house hold was then headed by widower son Thomas.  Shortly thereafter on May 16, 1930 Floyd Gay, aged 89.2 years, died at  home. He was survived by a sister, six daughters one son, sixty five grand- children and forty seven great grand- children. At his passing he was receiving a $65 per month U.S. Government disability pension stipend based on ailments or physical conditions which traced back to his days of Civil War soldiering.

Burial was/is in the Snohomish G.A.R. Cemetery beside Martha.