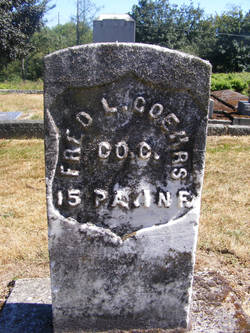 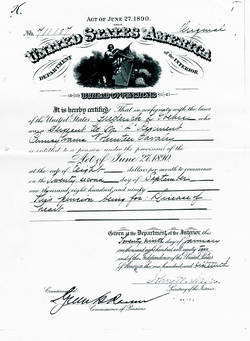 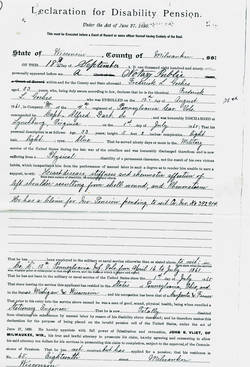 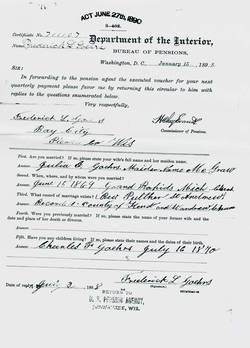 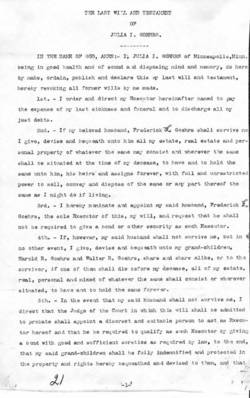 The 15th, a three month regiment, was organized only days following the fall of Fort Sumter. At Camp Curtin they were armed and partially supplied with clothing and equipment. An excellent brass band was also attached to the unit. Shortly thereafter they moved to a camp near Lancaster where they were comfortably quartered in barracks and received “many kind attentions from the people of the city.”

On 7/2 the 15th was with a contingent that crossed the Potomac into VA. Co. “I” was thrown forward as part of a skirmish line. Suddenly the skirmishers were confronted by a battalion of Confed. Col. Turner Ashby’s cavalry. As the rebels were dressed in blue blouses they had the general appearance of Union troops which resulted in the Confederates quickly gobbling up the unsuspecting Yankees and whisking them away south.

As it was early in the war, the Confederate ruse was considered a “brilliant affair” and the captured Federals were “subjected to every species of insult by the exultant populace.” Six of the captured troops would ultimately die from the harsh treatment and exposure in southern prisons before they were exchanged. As for the remainder of the 15th, they stayed in Virginia for a time before being ordered back to Pennsylvania where they encamped until final muster.

After being organized the 4th Cavalry, the 64th (infantry) regiment of the line, and a three year unit, primarily lay in camp near Washington D.C. During this period it was with difficulty the command was maintained intact, as the cavalry arm of the service was not then in favor. Finally, in May ’62 it was sent to join Union Gen. McClellan’s Peninsula Campaign. From that point until the wars end the 4th would see almost constant action in a “who’s who” listing of eastern theater battles.

Of note was the participation of two squadrons of the 4th in the early 1863 battle of Kelly’s Ford (VA), the first “real” Union cavalry victory of the war. Also significant was the unit’s pursuit of Confed. Gen. R.E. Lee’s Army of Northern Virginia after its retreat from Gettysburg. In that campaign of maneuvers out of 375 men in action at Jeffersonton the 4th lost about 200 killed, wounded and missing. Many of those captured subsequently died in Andersonville prison.

During the winter of 1863/64 almost two thirds of the unit reenlisted, but delayed furloughs and the receipt of detachment after detachment of raw recruits saw the 4th enter the May Wilderness Campaign as a veteran regiment in name only as less than 20 of the original enlisted men were present for duty. By the time of the North Anna River action, however, the returning veterans swelled the ranks making the 4th the largest regiment in its corps. The last actions of the 4th occurred the morning of the Confederate surrender at Appomattox. On 4/9/65 Gregg’s division cut off a body of the enemy’s cavalry, but further operations were stopped by the news of Lee’s capitulation.

Henry, Mary, Frederick and his younger brother, William (b. 1842 Hesse-Kassel) came to America in 1846. In the United States they settled in Pennsylvania where another Goehr child, Ann “Minnie”, was born in 1848. In 1854 Frederick became a naturalized U.S. citizen.

During the U.S. Census of 1860 the Goehrs were residing in Blakely Luzerne County, Pa. At that time Henry Goehrs listed his occupation as “miner.” As for Frederick, he indicated he was a “printer” by trade. When he entered military a year or less later he noted his pre- war occupation was  “stationary engineer” which means he was likely operating a steam heating boiler in a large commercial or residential building.

Frederick Goehr’s first military enlistment was under his correct surname. His second was under the name “Goches.”  Most likely this was a miss-spelling of his name due to his speaking with a German accent.  Such miss-spellings would follow him even into death when his Everett Herald obituary noted his last name as “Gears.”

Beyond the name difference and his advancement to the rank of sergeant, no specific details are available pertaining to his two periods of service.  However by 1890, at age 53 he was claiming to be totally disabled by heart disease, rheumatism, and stiffness of the left shoulder which had been caused by a “shell round” while in the army.  The heart problem would result in his receiving a U.S.  Government disability pension stipend which amounted to $15 per month at the time of his death.

Amongst others, post war occupations for Frederick included carpenter and farmer.  He appears to have applied these trades in Pennsylvania, Ohio and, by 6/15/69, Michigan, where he married Julia I. McGraw (b.12/3/30 NY).

The union of Frederick and Julia would produce two children, only one of which, Charles Frederick (b. 7/16/70 Eaton, MI) is named..

In 1878 the Goehrs, still in Michigan, were homesteading `60 acres near Toledo City. By 1884, however, they had quitted that state in favor of Milwaukee, WI. In Wisconsin Frederick listed his occupation as “machinist.

Because most of the 1890 U.C. Census was destroyed by fire, exactly how long the Goehrs remained in Wisconsin is not known. However, by 1900 they were residing in Hennepin Co., MN. Frederick’s occupation was there listed as carpenter in both 1900 and 1905.

Around 1907 Frederick and Julia removed westward to Everett, Snohomish Co. WA.  Why the couple came to the Puget Sound area is not known. Perhaps their son was living in the area.  In Washington Frederick’s occupation was listed as   “(railroad) car finisher.”

Julia Goehrs died on October 20, 1907.  The cause of her death was heart failure. Burial was/is in the Snohomish, Snohomish Co. WA Grand Army Of The Republic (G.A.R.) Cemetery.

Frederick died 1/1/09 of cardiac failure “following a lingering illness.”  He was just shy of his seventy-third birthday.
Burial was/is beside Julia in the Snohomish G.A.R. Cemetery.