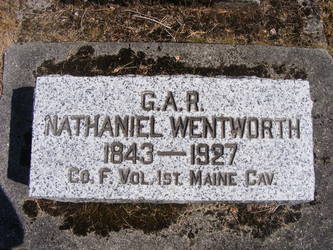 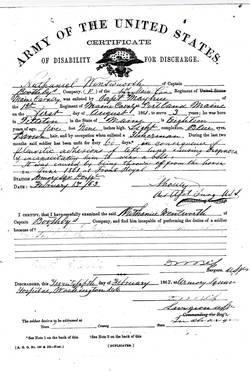 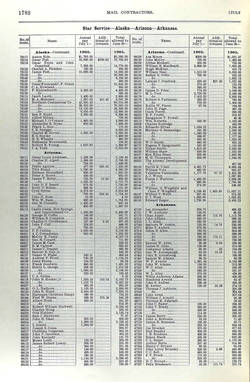 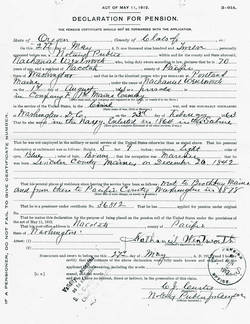 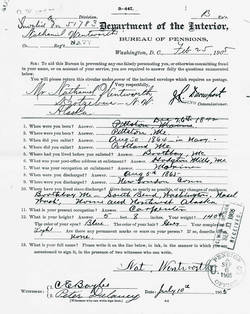 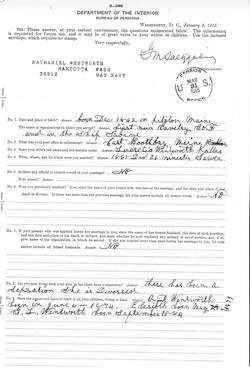 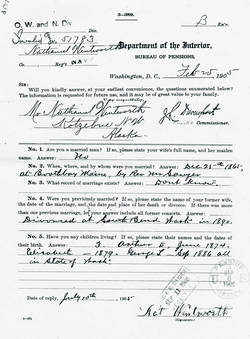 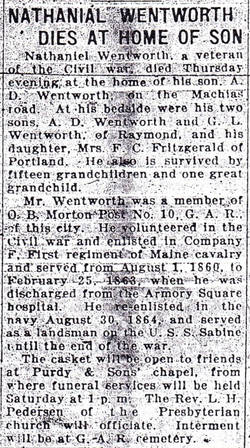 This “eastern Theater” three-year unit proved to be one of the hardest campaigning cavalry regiments in the American Civil War, a distinction which claimed a heavy toll on men, animals, and equipment.  Although raised in 1861, the 1st didn’t leave Maine until March, 1862 when it headed for Virginia.

It saw its first action charging the enemy at Middletown 5/23/62 while covering Union Gen. Banks’ retreat to Williamsport.  Combat followed at Cedar Mtn. and Brandy Station.  In September the 1st was present at Second Bull Run, Fredrick, MD, South Mountain and Antietam.  By late 1863 the regiment had lost in action or worn out in service nearly 700 horses.

In additional to those above, a list of battles in 1862, ’63 and on into ’64 reads as follows: Fredericksburg, Rappahannock Station, Aldie, Middleburg, Upperville, Gettysburg, Sheperdstown, Sulpher Springs, Mine Run, around Richmond, Old Church, Todd’s Tavern, Ground Squirrel Church, Hawes’ Shop, Col Wyatt’s Farm, Bordentown Road, and Bellefield.

With original members’ terms of service expiring in November, 1864, remaining veterans, new recruits and members of the 1st D.C. Cavalry participated in the closing battles of the Rebellion.  Total (officers and enlisted men) killed or mortally wounded: 518.

Built in 1855, and displacing 1,726 tons, the three masted frigate Sabine, like her prototypes, the United States and the Constitution mounted 44 guns: two 10-inch Dahlgrens, ten 8-inch Dahlgrens, and eighteen 32-pounders.  She was amongst the first of the “old navy” (wooden) ships to see service in the Civil War and was the first blockader of a rebel seaport in the south Atlantic.

In February, 1862 when the ironclad “Monitor” was begging for officers and men, a substantial number of the Sabine’s 375 man crew volunteered for duty on the “new fangled” vessel.

NOTE: The original birth – to – death biographical profile on Nathaniel Wentworth was written during the early years of the Civil War Veterans Buried In Washington State project. As a result it was limited in both length and availability of research resources.

The biography which follows was written in June, 2019. While it is more detailed than its predecessor, it lacks the depth of more recent additions to his website which craw heavily upon veteran-related military, pension and other documents housed in the National Archives in Washington, D.C.

Nathaniel Wentworth was born 12/26/42 in Pittston, ME.  His parents were John (b. 1817 Waldo Co., ME) and Betsey (nee Kelsey b. 11/23/1819 Strafford NH). No additional information is available pertaining to his birth family or formative years.

In August, 1861 Nathaniel, at that time a 5’9” teenaged “fisherman,” joined the U.S. Cavalry.  His riding days would be rather short lived as in June, 1862 (discharge papers indicate 1861, but his unit had not been formed at that time) he was thrown from his horse at Front Royal, VA.  As a result, he developed pleurisy, an inflammation of the lung membrane which most likely lead to painful coughing which prevented him from wearing cavalry gear, i.e., a belt.  As such, while in the Army Square Hospital in Washington City, Private Wentworth was granted a medical discharge.

Leaving the cavalry, Nathaniel returned to Maine and to working on the ocean.  Thus, he listed occupation as “mariner” when he returned to the service in 1864. On this occasion he joined the U.S. Navy.  Very likely his re-enlistment was prompted by the availability of enlistment bonuses. During this enlistment Nathaniel served as an entry level sailor on the frigate U.S.S. Sabine.  His second enlistment was without trauma.

As noted by their birth places, not all of Nathaniel’s and Lucretia’s children were born in Maine. The Wentworth family remained in Maine until 1878 then removed to the far southwest corner of Washington Territory.  In that area towns of residence were listed as Naselle and Southbend.  The latter location was noted in the 1890 divorce of Nathaniel and Lucretia.

After divorcing, Nathaniel remained in Washington until 1900. He then headed “north to Alaska.”

In Alaska it appears Nathaniel initially settled in Nome. However, by late 1904 he was living in Kotzebue.  Up north his occupation was listed as carpentry.

By 1912 Nathaniel had returned to Pacific Co., WA where he settled in the community of Nacotah., WA. How long he remained there is not documented.

Nathaniel Wentworth, veteran of the U.S. Cavalry and U.S. Navy died 12/9/26 at the home of his eldest son, A.D who was then living on the Machias road in Snohomish Co.  He had apparently resided there for some period of time as he had become a member of the Snohomish, Snohomish Co., Grand Army Of The Republic (G.A.R.) post.

Dead at age 83 years, 11 months, Nathaniel was survived by his three children, fifteen grandchildren, and one great grandchild.

At his passing he was receiving a $65 U.S. Government disability pension stipend based on his American Civil War military service.

Burial was/is in the Grand Army Of The Republic (G.A.R.) Cemetery in Snohomish, Snohomish Co., WA