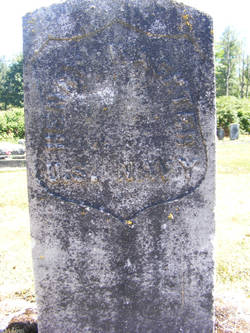 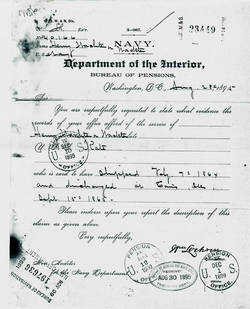 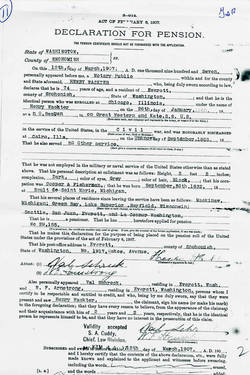 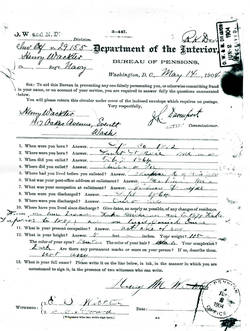 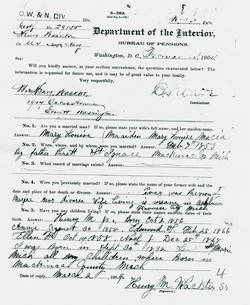 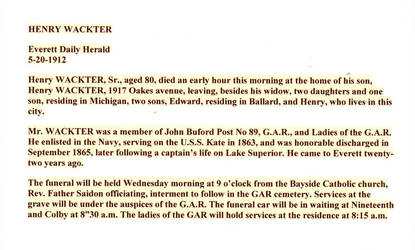 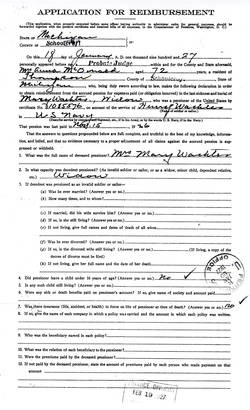 Mary Wachter request for re imbursment of burial expense p1 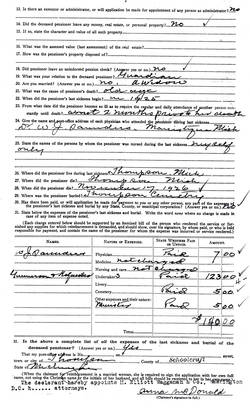 Mary Wachter request for re imbursment for burial expense p2 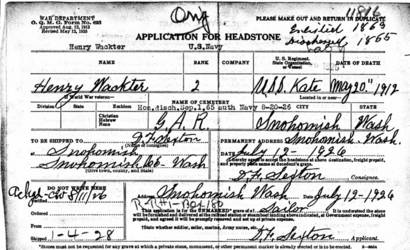 This wood construction side wheel steamer was purchased by the War Department 2/10/62 and, apparently, lightly armored as a “tin clad.”  She was immediately put to work with the Western Flotilla supplying ships with ammunition and ordinance at various points on the Mississippi and its tributaries.

Occasionally these duties involved firing upon Confederate shore batteries and, on one occasion, (7/30/62) driving off cavalry attacking Union shipping near the mouth of the Arkansas River.  In this vein the Great Western was armed with one 12 lb. Cannon, one 32 lb. Cannon, and one 6 lb. Cannon.

On 9/30/62 she was transferred to the U.S. Navy.  During 1862 and the first half of ’63 the overriding concern of Union forces in the west was the capture of Vicksburg, MS.  During this period the Great Western spent much of her time above the city near the mouth of the Yazoo River in support of combined operations and joint attacks that eventually lead to Vicksburg’s fall in July, 1863.

After the capture of Vicksburg the Great Western continued duties as a supply ship along the Mississippi.  In July, 1864 she was sent to Cairo, IL (the great Union naval base in the west) to act as a “receiving ship.”  In March, 1865 The Great Western was sent under that status to Mound City, IL and, with the war’s end, sold at auction.

Built in 1864 as the Kate B. Porter by J.B. Porter & Son, Belle Vernon, PA, this 242 ton wooden steamer was purchased by the U.S. Navy at Cincinnati, OH and converted into a “tin clad” (lightly armored) gunboat.  Armament consisted of two 20 lb. Parrot rifles, six 24 lb. Howitzers, and two 12 lb. Howitzers.

Renamed U.S.S. Kate, the 5’6” draft steamship’s first duty was patrolling the Mississippi River from Mound City, IL to Memphis, TN during the waning days of the Civil War.  On 4/28/65 she was ordered downstream to help intercept fleeing Confederate President Jefferson Davis.  After Davis’ capture the Kate steamed back upriver to assist in the demobilization of the Navy’s Mississippi squadron.  She was then sent to the Tennessee River to clear sunken gunboat hulks and barges.

In August she was ordered Jefferson Barracks Reserve to discharge her ordinance and assist in disarming other vessels.  One of the last vessels on the Mississippi to remain on active naval duty, the Kate was decommissioned and sold at public auction four days later.  Re-titled the James H. Trover (4/12/66) her fate was (6/21/67) to become stranded 300 miles below Fort Bent, Montana.

*Note:  The cemetery headstone reads Wackter. Pension records reflect both Wackter and Wachter while muster rolls of the U.S.S. Kate show Wactor. Herein we will use the spelling Wachter.

The original birth/death biographical profile on Henry E. Wachter was created during the early years of the Civil War Veterans Buried In Washington State project. As such, it was limited in size and in resources available to be drawn upon. The bio which follows was created in March, 2018. Although it is based on much more family information than was originally available, it still lacks the details that come with complete National Archives documentation.

Henry M. Wachter was born 9/30/32 in Sault Ste. Marie, Chippewa Co., Michigan. His parents were Christian Jacob (b. 1786 Switzerland) and Marie Antoinette (nee Clavel b. 1801 Canada) Wachter. It appears Christian was, by trade, a fisherman.

In 1850 the U.S. Census found Henry, then eighteen years of age, residing in a home of his own in located in Mackinac County on Mackinac Island, MI. In the household with him was his sixteen year old brother, John, and another eighteen year old named Joseph Richards. Henry’s parents and two younger siblings lived nearby.

During America’s War of the Rebellion Henry, a 5’2” dark complexioned cooper/fisherman, enlisted in the U.S. Navy for a period of two years.  His military tenure would prove to be without incident. Even so, in later years seaman Wachter would be granted a government disability pension based on his U.S. Navy experience.  The stipend would amount to $20 per month at the time of his death.

With the War over,  Henry Returned to his wife and family on Mackinac Island, There, he resumed the life of a commercial fisherman in waters of Lake Michigan

In March, 1868, Henry applied for a 26 acre homestead track through the Marquette, MI (?) land  office. The exact significance of this application is not known and he would later make application on a much large tract.

In 1870 the U.S. Census found Henry, Mary and seven of their children continuing to reside in Mackinac, Co. Henry was still earning a living as a fisherman.

After 1870 the affairs of the Wachter family become murky. According to at least one source, in 1874. Henry moved to Wisconsin where he reportedly served as a ship’s captain on Lake Superior for the next ten years. Did he leave his wife and children behind in Michigan during this sojourn? The census for 1880 places Mary – a housewife - and sons Napoleon, Edmond and Newell in Schoolcraft, Hiawatha co., MI. There is no sign of Henry.

At some point in history Henry headed further west to Washington Territory/State. When and why that move occurred is not known. It may have been because he had adult children living there. As noted, when this move was made is not known because as of 12/10/89 he was issued a 160 acre homestead track in Michigan. Then, the following year the U.S. Veterans census found him in West Seattle Township, King County, Washington. .In Washington, besides West Seattle, Henry would also reside in San Juan, Island County, LaConner – with son Edmond – in Skagit County and, finally, Everett, Snohomish County.

In 1904 Henry would note that although never divorced, his wife was living in a Traverse City, MI insane asylum.
Henry Wachter, Sr. died 5/20/12 in Everett, Washington at the home (1917 Oakes Ave) of his son, Henry M., Jr.  Senior was 79.7 years of age. Burial was in the Grand Army of The Republic Cemetery in Snohomish, Snohomish Co., WA.

At some point in time Mary was released from the mental institution in which she spent so many years. In 1880 she was living with daughter Anna and others in Schoolcraft, Thompson County, MI. It appears that was where she died on 11/15/26.  She was/is buried in the Thompson Township Cemetery.

After Mary’s passing a guardian petitioned the U.S. Government of reimbursement of $140 paid out for her medical and burial expenses.  It is not known if the petition was granted.