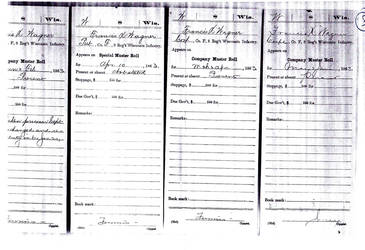 The general commanding at Farmington said, “The badger State may feel proud to have the honor of being represented by so gallant a regiment as the 8th Wisconsin.”  Union Gen W.T. Sherman highly complimented the regiment for doing “its whole duty in the camp, on the march and in battle,” for “Peculiar courage and gallantry at Jackson and throughout the siege of Vicksburg,” and for other services.

The Wagners originally departed their native land from the Port of Bremen, Germany travelling to or through Great Britain’s port of Liverpool to the United States aboard the vessel Kossuth. According to the passenger list they were also accompanied by an unmarried sister of Katherine named Josepha Raab.

.  In September, 1861 Frank, then residing in or near Prairie du Chien, WI, responded to his adopted country’s call to arms and joined Captain Greene’s company of the 8th Wisconsin Infantry.  That company was subsequently designated with the letter “F.”

Upon Private Wagner’s enlistment in the military, it appears someone penned his middle initial in such a manner that, in the stylized handwriting of the period, the H looked like the letter X.  This error was picked up by company scribes and maintained throughout his army tenure.

Mr. Wagner’s period of military service was not without trials and tribulations.  First, on 9/13/62, near Luka, MS he was captured by Rebel forces.  He was later exchanged and, following some time spent at Benton Barrack, MO, returned to duty with his company on 1/20/63.  Secondly, one database notes that on 6/6/64 near Lake Chicot, AR he was wounded.  As military records make no mention of the wounding, it was likely not very serious.

Aside from being captured and, perhaps, wounded, Francis’ military service was decidedly a positive experience as, by March or April of 1863 he had advanced to the rank of corporal.  Further, on 11/1/64, after having reenlisted as a veteran volunteer at the beginning of the year, he was promoted to sergeant.  Finally, after reenlisting as a veteran volunteer, one source notes him promoted to second lieutenant on 8/24/65, but being mustered out of Federal service before the rank became official.

By 1880 the Wagners were residing in the Chippewa County community of Bloomer, Wisconsin.  Likely, Frank Jr. died during the early 1880s. (One of the Wagner girls may also have died along the way as only one is mentioned in Mr. Wagner’s obituary.)

In 1882 Frank and family moved to Seattle King County, Washington Territory. Why the move was made is not known. He
remained there for three years before travelling south of that city to Chehalis located in Clark Co., WT. In Chehalis he reportedly managed a large ranch. Sometime after this he spent a few months in San Francisco, CA before returning to
Wisconsin.

The Wagners next moved to the Iron Range region of Minnesota. Specifically his place of residence was Ely. According to a Wisconsin genealogist, Katherine has been shown residing there in 1898. After that, the Wagners – or perhaps just Frank - moved back to Wisconsin and engaged in the meat business as a butcher until 1900.

According to son William F. Wagner’s 1926 biography, his father, Frank, went to Whatcom Co., WA ca. 1900 and purchased 80 acres of land near Everson. He then utilized the acreage for general and dairy farming until 1903, when he sold the farm and moved to Tacoma, Pierce Co., WA for “a few months”.  After this he reportedly bought 200 acres of land located near Arlington in Snohomish County which he farmed for four years. Selling that parcel he then moved to Everett, Snohomish County, “for a few years.”

Not yet done with his land purchases, about 1911 Frank acquired 60 acres near the small, Snohomish County community of Machias. He farmed this parcel until he sold it to bachelor son William. In 1926 this land was characterized as being all pasture except for twelve acres which were under cultivation.

Former Civil War Soldier Francis (Franz) “Frank” H. Wagner died 6/15/28 at his son’s home in Machias.  At passing he had reached 88 years of age.  He was/is buried in the Grand Army Of The Republic (G.A.R.) Cemetery in Snohomish
Snohomish County, WA.

The U.S. Census for 1930 found Katherine living in Machias with sons William and Frank. Katherine died 5/13/1934 in Snohomish, WA and is buried in beside her husband at Grand Army Of The Republic (G.A.R.) Cemetery.