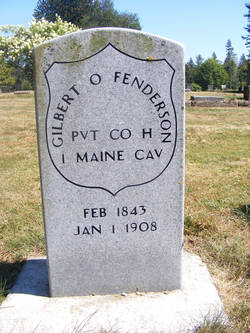 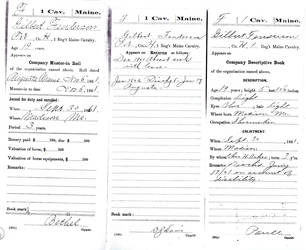 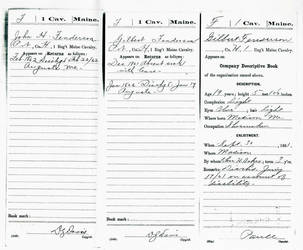 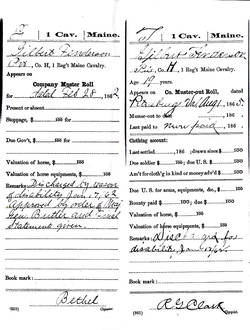 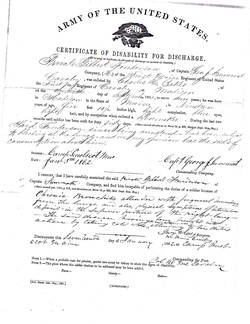 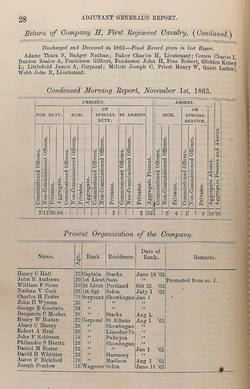 The 1st, a twelve company, three year regiment was organized in Late 1861 from the state “at large.” It did not leave Maine until the following March when a number of companies moved to Washington, D.C., while others traveled into Virginia’s Shenandoah Valley.

With original enlistees mustered out, the regiment, now composed of veterans, new recruits and consolidated elements of the 1st D.C. Cavalry, participated in the closing conflicts of the war.

NOTE: The original birth – to – death biographical profile on Gilbert Orin Fenderson was created during the early years of the Civil War Veterans Buried In Washington State project. As such, it was limited both in terms of research sources and length. The profile below was written in February, 2019. While it contains many more details than the original it still falls short of the depth found in more recent additions to this website which draw heavily upon documentation obtained from the National Archives in Washington, D.C.

Gilbert “Orin” Fenderson was born in February, 1843 in Madison, Maine.  As of this writing no date of birth has been located in available documentation.

While there is no information regarding Orin’s childhood or formative years, by 1860, when still a teenager, he had assumed the occupation of shoemaker. He was, at that time,  living with his parents.

In 1861 the 5’10 ½”, light complexioned Orin, along with his two brothers, John and James answered their country’s call for fighting men and joined company “H” of Maine’s 1st cavalry regiment. As we shall see, none of the three was to have an auspicious military career.

Having joined the army at the end of September, 1861, by December Orin was in the hospital.  According to available documents, after “taking cold while said soldier was attending to his duties”, he developed chronic bronchitis which lead to “frequent hemorrhaging from the lung.” This, combined with “physical symptoms of tuberculosis in the superior ports of the right lung, prompted an attending surgeon to comment “(Private Fenderson) in my opinion has the seeds of consumption (tuberculosis) about him.” As such, after being unfit for duty for sixty days, Orin was granted a medical discharge prior to either he or his regiment leaving Maine.  As for his brothers, John was discharged 2/22/62, while James, after at least having gotten out of the state, deserted on 5/11/62!

Military life behind him, it appears likely Orin returned to the family home in Madison.  At some point, however, he moved in with brother John and wife Susan (nee Pineo, sister of ACW veteran Guilford Pineo row: 20 site: 8 G.A. R. Cemetery Snohomish, WA) and family who, at one time, were residing in East Machias, ME. John appears to have remained in Maine throughout the remainder of the 1860s and into the middle of the 1870s as all his children were born in that state.  By 1880, however, John’s clan, including Orin, was in Wisconsin.

In August, 1888 John’s family, plus Orin, moved to Snohomish in the Puget Sound area of western Washington Territory.  Why the move was made is not documented, but as John was a farmer, perhaps he was seeking new land to cultivate.  It appears, however, that John’s marriage ended during the following two years and he headed for California.  He was later to die and be buried in Stevens County, Washington.

After the breakup of John and Susan’s marriage Orin remained in Snohomish and, at some point, moved in with one of John’s daughters, Mrs. John “Linnie” Rhoades and family. The 1900 census listed him at this residence.  Both Orin and Mr. Rhoades noted their occupations as “junk dealer.”

Gilbert Orin Fenderson died 1/1/08.  His obituary read, in part, as follows: (Orin Fenderson) was picked up dead at an early hour last night, near T.H. William & Co.’s office, on the corner of second and Maple Street (in Snohomish).  He had been down town and had evidently been stricken with death on his way home.”

Whether or not Orin’s health had been poor since his Civil War days is not known.  However,  he would not have been eligible for a government disability pension to help deal with any medical problems because he had not served the requisite 90 day minimum period of federal service.  Also, it is not known if health conditions had anything to do with the fact that Orin never married.

Orin Fenderson was/is buried in the Grand Army Of The Republic (G.A.R.) Cemetery in Snohomish, WA. His gravesite is marked by only a civilian headstone.