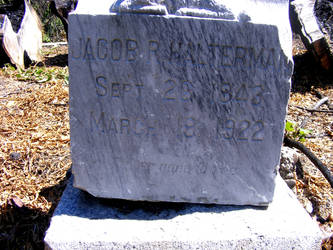 No history exists for the 14th Virginia Militia Cavalry regiment. Formed in the region around Winchester, VA in the lower Shenandoah Valley's Hardy County, it was likely a six month unit formed to defend the Virginia homeland during the early months of what was to become four years of hard fought civil war. It probably did not see service outside its local region. The 14th disappeared in March, '62 when the Confederate States government sought to bring such local, independent military organizations under an umbrella of 3 year, or the duration of the war, enlistments.

* NOTE: "Harness" company took its name not from animal reins, but from William Henry Harness. Harness resided in Hardy County, VA.  Prior to being in the 7th, William was the first colonel of the 14th. He also served in both the 17th and 11th cavalry units before resigning his military commission on 11/5/63.

Although no official regimental history exists for the 7th, a look at the unit's departmental assignments show it to have been an eastern theater regiment. It was assigned to Virginia’s Shenandoah Valley from October, 1861 through July, 1862 and therefore was with Confed. Gen. Thomas J. "Stonewall" Jackson during his brilliant spring '62 Valley campaign and the peninsular campaign which followed.

August '62 saw the 7th assigned to Confed. Gen. R.E. Lee's Army Of Northern Virginia. It remained there throughout its period of service. This means the regiment was likely with Lee from Sharpsburg/Antietam, MD (9/17/62) through Gettysburg, PA (7/1 - 2- 3/63) onto the Overland campaign (5 - 6/64) and into the fortifications around Petersburg, VA which, for all practical purposes, ended four long years of bloody civil war (4/9/65) at Appomattox Court House, VA.

Formed amid the reorganization of Confederate forces in the spring and summer, 1862. this one year, eastern theater regiment spent the first quarter of its existence assigned to the Dept. of Northern Virginia within which it most likely saw action within the Shenandoah Valley during '62. August through November of that year found the unit under the command of Confed. Gen. Thomas J. "Stonewall" Jackson during the Maryland campaign which saw battles at South Mountain (9/14/62) and Antietam/Sharpsburg (9/17/62). December, '62 through final muster in February, 1863 found the regiment back in the Shenandoah.

No official history has been found for the 11th. Even so, it appears to have been formed immediately on the heels of the 17th Batt. Virginia Cav. being mustered out of existence. Like the 17th, the 11th was initially assigned to the Shenandoah Valley, but almost immediately thereafter moved into Confed. Gen. R.E. Lee's Army of Northern Virginia. This being the case, the 11th was likely with Lee from the time of the battle of Chancellorsville (4/30 - 5/6/63) through that army's surrender (4/9/65) at Appomattox Court House, VA.

Jacob Roscoe Halterman was born on either September 24 or 26, 1843 in Hardy County, Virginia. [Note:  When, on 6/24/83, Virginia was split asunder and West Virginia was created, Hardy County became a part of the new state.] His parents were Christian (b. 1805 VA) and Sarah (nee Feathers b. 1805 VA) Halterman.  The Haldeman’s were a farm family.

Initial information on Jacob, himself, comes from September, 1861 when, just days shy of his eighteenth birthday he enlisted in the Confederate States Cavalry. His original unit was the 14th Virginia Militia Cavalry. During the years to follow and prior to the ending of four bloody years of civil war in 1865, Private Halterman would enter and pass through three additional Rebel regiments: the 7th VA Cavalry, the 17th Battalion Militia Cavalry and the 11th Virginia Cavalry. The moves, however, were not physical, but on paper as the Confederacy organized, re-organized and consolidated their military organizations.

The only available specifics pertaining to Private Halterman's period of military service stem from his time in the 11th VA Cavalry. Firstly, on 2/28/63 (place not stated) he was shown on company ("B") rolls as being present with his own horse. Secondly, on 11/29/63 he was wounded near Parker's (Cross Roads) Store in Tennessee and lastly, on 4/1/64, at a place not identified, he was again listed a being present for duty. As far as is known, Private Halterman served with the 11th until its 4/9//65 surrender at Appomattox Court House, VA.

ED. NOTE: Post War, most former Confederate combatants did not receive any kind of service or disability pension. Such was the case with Jacob Halterman. As such, the remainder of this biographical profile is based only on U.S. Census tallies and family genealogy information.

Although it is not documented, likely Jacob returned to Hardy County, West Virginia after the War's end. The only solid information we have on his life following the cessation of hostilities between the north and the south is that on 11/15/65 in Rockingham County, VA he married to Susan E. Fitzwater (b. 9/29/47) [Other birth years exist, but 1847 is most prevalent]. The couple' first child, son Fernando Filorenre Lee "F.R.M" Halterman was born in 1/4/67 in West Virginia.  By 1870 the Haltermans were located in Brownsboro, Washington Co. TN and Jacob was a farm worker.

Susan would bear Jacob two additional sons and two daughters. In that vein, the final four Halterman children would be born during the decade of the 1870s. The first was daughter Savannah Brisavisto Lee Halterman. Interestingly, when she was born on 3/28/71, the family notes birth was in Wichita Sedgwick Co., Kansas. The same was true for son Wilber Pemberton who came into this world on 1/7/74. However, when daughter Lacona A was born 10/1876, her birthplace was West Virginia as was the birthplace of daughter Seminola F.E. on 3/24/79. When and why the Halterman family had moved to Kanas and then back northward is not documented. Also, not documented is where they resided while in Kansas.

The Haltermans are next sighted in the U.S. census for 1880. That tally placed Jacob, Susan and F.M.R. back in West Virginia in or near the Hardy County community of Lost River. There "J.R." was occupied with farming. Why Savannah, Wilber and Lacona are not listed is not known, but in the household was a boarder named Pennington Everett. Interestingly, despite Halterman family moves, Mr. Everett would be with them two decades later.

1900. A new decade. A new century. A new census and, what's this? A new state and a new child.  The dawn of the 20th century found the Haltermans in Equality Miller County, Missouri with daughter Florence Lee having joined the family in 1889. The population count noted the household as comprised of J.R., Susan and eleven year old daughter Florence. She was the fifth of the five Halterman children. Florence had been born in Missouri, so the family had been in the Show Me State “for a quite a spell." As noted earlier, boarder Pennington Everett was also under farmer Jacob and Susan's roof.

The Haltermans remained in Miller County Missouri for almost another twenty years, during that time period they made an intra-county move from Equality to Franklin. As far as is known the latter was their home community until they removed from the state circa mid-1919.

As the decade of the teens drew toward a close the Jacob and Susan quitted Missouri for the Puget Sound area of western Washington State. Likely what drew them to this region was their adult children and families residing here.

Settlement location in Washington was the small rural area of south Snohomish County known as Maltby where Son Ferdinand resided. Jacob and Mary moved into a dwelling next door to Ferdinand - then employed as a millman - and his wife Mary.

Jacob R. Halterman died Sunday at 11:30 a.m. at the home of his son F. Halterman in Maltby, from old age. Mr. Halterman was born in West Virginia seventy eight years ago. During the greater part of his life he made his home in Miller County Missouri and two and one half years ago went to Maltby to reside with his son. Mr. Halterman was a veteran of the Civil War in which he served three and one half years with the confederate army. He was the last of a family of nine children. Surviving Mr. Halterman are four sons, Ferdinand of Maltby; Leo of Iowa (Fernando), Wilber of Everett and Coni of Machias and one daughter Mrs. Seminola Bowlin of Miller County, Missouri. The Reverend Charles R. Engle officiated in the service at the G.A.R. cemetery (in Snohomish City) this afternoon where interment was made by C. H. Bakeman.

On some undocumented date after Jacob's passing Susan returned to Missouri. There she resided in Bagnell, Miller County with remarried daughter Seminola Bowlin and family. Although it is not documented, likely she was in the Bowlin home when she died on 1/23/35 in Carrollton, in Carroll County. Burial was in Wakenda cemetery, Hardin Ray County, Missouri a long, long way from Jacob's final resting place.