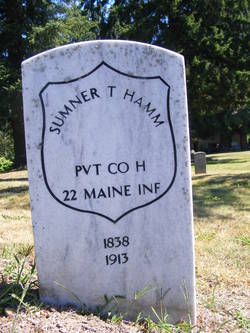 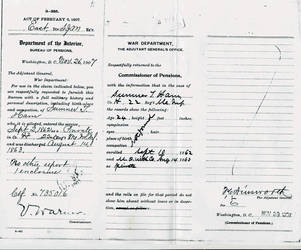 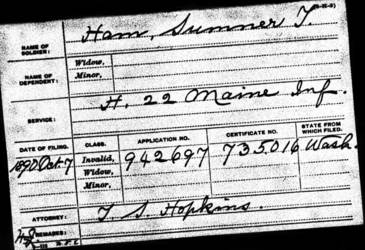 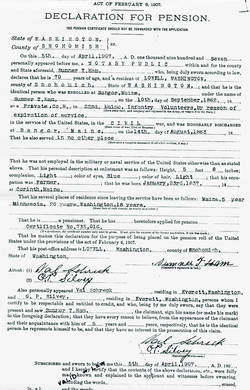 The 22nd, a nine-month unit, left Maine for Washington D.C. only days following being mustered into federal service. From there it was ordered to New Orleans, LA after which it occupied Baton Rouge and participated in actions around Port Hudson, which lead to the surrender of that place. The regiment, having marched over 500 miles during the campaign, remained quartered inside the Port Hudson fortifications until 7/24/63 when it started for home and final muster.

The original birth – to – death biographical profile of Sumner Ham was created during the early years of the Civil War Veterans Buried In Washington State project. As a result, it suffered in terms of presentation size and available research resources.

The biography that follows was written in April, 2019. While it contains many more details than its predecessor, it lacks the depth of more recent additions to this website which draw heavily upon veteran-related documents houses in the National Archives in Washington, D.C.

*Note: The cemetery headstone surname is spelled “Hamm.”  The same spelling is reflected in the 1890 census. Pension applications signed by the veteran indicate the spelling “Ham.” This spelling is also present in a Civil War database containing a regiment roster. The 1900 census notes spelling:  Herein we are acknowledging the veteran’s spelling of his surname as Ham.

In 1840 the Hosea Ham residence was in or near Vasselboro Kennebec Co., ME. A decade later, in 1850 it was in Orneville Piscataquis Co., ME, while in 1860 it was in Corinth Penobscot Co., ME.

It appears Sumner remained on his parents’ Corinth, ME farm until he joined the military. In later years questions were raised concerning his enlistment date.  He claimed to have enrolled in the U.S. army on 9/10/62. Information taken from a data base source indicates the 5’6” farmer enlisted and was mustered into the service on 10/10/62. Whatever his entrance dates, Private Ham’s military tenure appears to have been “uneventful” in terms of personal crises, illness, injuries or wounds.[1]

After his separation from the army Sumner returned to Maine where he lived for five years. In 1870 his address was Milford located in Penobscot Co. No occupation was listed during this period.

Leaving Maine, Sumner spent twenty years in Minnesota. He then migrated westward to the Puget Sound region of Washington Territory/State. What drew him to the Pacific Northwest is not documented, but perhaps it was that his brother Rhenaldo was in Seattle, King co., WA in 1892 working as a printer.

In 1890 Sumner’s community of residence was Quilcene located in Jefferson Co. A decade later, in 1900 he was living in the rural Snohomish Co. community of Lowell, which was/is located on the southeast edge of present day Everett. This would be his final encampment locale.

In 1907 Mr. Ham applied for a military disability pension based on ailments or other conditions which traced back to his days of Civil War soldiering. A pension was subsequently granted as he was receiving a $15 per month stipend at the time of his death.

Sumner T. Ham died 1/17/13, only days shy of his 86th birthday. His newspaper obituary read, in part, as follows: “The body of S.T. Hamm, a G.A.R. veteran, was found yesterday in his room at Lowell, by friends who missed him from his usual haunts. He had been suffering from a cold for several days, and Coroner Maulsby after making an investigation concluded that pneumonia and heart trouble were the causes of death.  He was unmarried and leaves a brother R.H. Hamm, of Seattle, and a sister in New England.”

Burial was/is in the Grand Army Of The Republic (G.A.R.) Cemetery in Snohomish, Snohomish Co., WA.