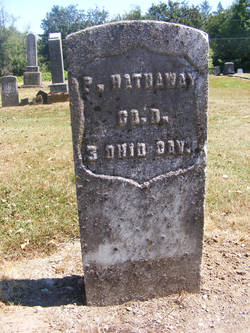 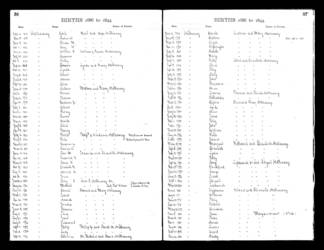 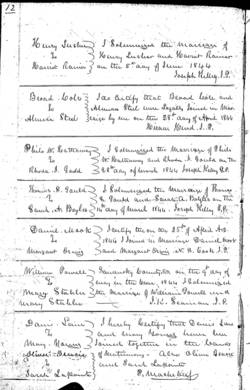 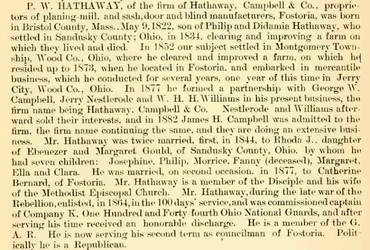 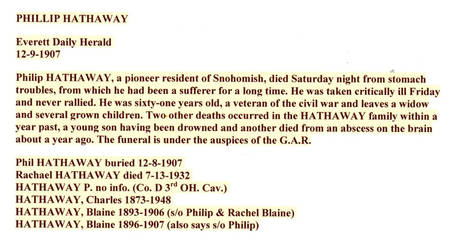 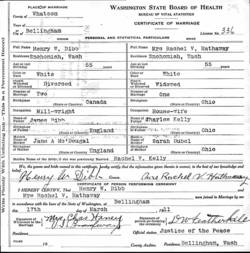 A three-year “western theater” regiment, the 3rd was organized from the state “at large.” It was first engaged with the enemy at Mundordville, Hart Co., KY in September 1862, driving three times their own numbers from the field. The following month, near Lexington, a detachment of the regiment was completely surrounded by and forced to yield to Confed. Gen. John Morgan’s cavalry.

At Stone’s River, GA the regiment suffered considerable loss the first day, but the next day repulsed a large Confederate force. At Chickamauga the 3rd was forced back to Charleston, TN, but after the battle pursued Wheeler’s cavalry through the state before routing them. In Jan. ’64 the regiment reenlisted. Returning to Nashville, TN from furlough the unit, in May, routed a Confederate force at Courtland, AL and confronted another at Moulton.

NOTE:  The original birth – to death biographical profile of Philip E. Hathaway was written during the early years of the Civil War Veterans Buried In Washington State project. As a result it was limited in both size and research resources. The biography which follows was created in March, 2019. While it contains many more details than the original, it still suffers from a lack of the depth found in more recent additions to this website which draw heavily upon veteran-related military, pension and other documents housed in the National Archives located in Washington, D.C.

Philip Ebenezer. Hathaway was born 3/23/47 in Sandusky, OH.  His parents were Philo W. (b. 5/9/22 Bristol Co., MA) and Rhoda Jane (nee Gould b. 11/13/24 NY) Hathaway. The U.S. Census for 1850 found the Hathaway family farming in or near the community of Scott located in Sandusky Co., so that, likely, is the community into which Philip entered this world.

As previously noted, in 1850 the Hathaway’s were in Scott Sandusky Co., OH. A decade later, in 1860, they were still in Ohio, but by then farming in or near Montgomery located in Wood County.

After entering the U.S. cavalry in 1864 Philip claimed that on 10/4 of the same year his horse fell on him near Rome, GA.  The incident caused injury to his abdomen, spleen and kidneys.    Also resulting from the fall was disease of the eyes.

In later years the U.S. Government would grant him a disability pension based on the eye illness, but reject the horse injury claims because no records could be found connected to the alleged incident.

As with many veterans of the American Civil War, where Philip settled after returning to civilian life is not known.   Although available documents are silent on the issue, it appears likely Philip returned to OH.

In 1867 Philip apparently married an unnamed woman. A preponderance of documental notations indicates the couple divorced on 4/6/71. No children are mentioned.

In 1880 the Hathaway’s were residing in Bradley Wood Co., OH. There, Philip’s occupation was noted as “teamster.”
By 1885 the family had quitted Ohio and were farming in Coffins Graves Delaware Co., IA. By 1887 when son Philip W. was born they were still in Iowa, but by then residing in or near Hartley located in O’ Brien County.

Civil War trooper Philip Hathaway – a pioneer resident of Snohomish - died 12/7/07 at age 60 years and 8 months.  Cause of death was noted as a “long standing stomach ailment.”   Burial was/is in the Grand Army Of The Republic (G.A.R.) Cemetery in Snohomish, Snohomish County, WA.

In 1910 the widow Hathaway was still residing in Snohomish, Snohomish Co., WA. In her home was son Philip who was employed as a laborer in a local shingle mill.

1940. A new decade, a new census. By that year 84 year old Rachel was widowed again. She was residing in Snohomish, WA.

Rachel passed on 3/27/1949. At death she was receiving a $40 per month government stipend based on her first husband’s days of Civil War soldiering.  Rachel is buried next to Philip in the Snohomish G.A.R. Cemetefy.