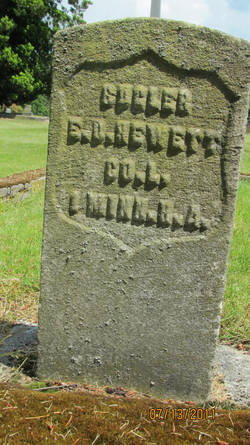 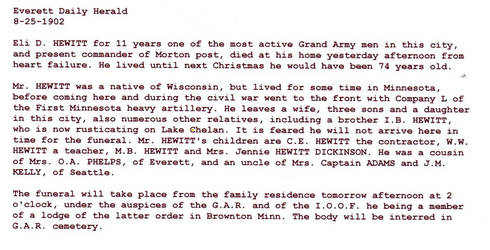 The 1st Minnesota Heavy Artillery, a 12 company, one year unit, was organized during the summer of 1864, mustered in by companies, and ordered to the fortifications around Chattanooga, Tennessee that winter as it was thought Confederate Gen Hood would try and recapture the city. The regiment remained at Chattanooga until mustered out by companies June through September, 1865.

NOTE:  The original birth – to – death biographical profile on Eli Hewitt was written during the early years of the Civil War Veterans Buried In Washington State project. As a result it was limited in both size and access to research sources. The bio which follows was created in March, 2019. While it contains many more details than the original, it still lacks the depth of more recent additions to this website which draw heavily upon veteran-related documents housed in the National Archives in Washington, D.C.

Eli D. Hewitt was born in the state of New York during the year of our lord 1829. Although no birth month has been located within available documents, there are hints that he was birthed in September.  A specific birth date has not been found.

By 1865 the Hewitts had quitted Wisconsin and were residing in Minnesota. However, exactly where, in Minnesota they were living is not known.

During the waning months of the War of the Rebellion Eli entered the U.S. Army. At the age of 36 years he was far above the average (27.5 yrs.)  age of a Civil War combatant.

Other than the fact that Private Hewitt served as an artillery bugler in the 1st Minnesota Heavy Artillery we have little information pertaining to his period of enlistment. . He would later claim his service proved deleterious to his health.

His brief tenure with the military behind him, as far as is known, Eli returned to his wife and family in Minnesota.

In September, 1866 Calista died. No details are available pertaining to her passing. Also not available is where she was/is buried.

As of 1870 U.S. Census the Hewitts were living and farming in Collins McCleod Co., MN. That was where on 9/20/70 Eli – likely drawing upon the fact that he was a Civil War veteran – he filed for a homestead. The fact that the family remained in McCloud for the following twenty years or so, indicates that Eli was ultimately granted patent (deed) to the property which was likely 160 acres of farmland.

Around 1890/91 the Hewitts moved westward from Minnesota and settled in Snohomish. There, at 61 years of age, the former Union soldier applied for a U.S. Government invalid pension claiming his months in the army had left him suffering from “catarrh (an inflammation of the respiratory system), asthma, rupture and piles.”  Although no documentation is available, likely he was granted a monthly stipend.

In 1910 Angleine Hewitt was still residing in Snohomish, Snohomish Co., WA. She died in Seattle King County, WA on 12/17/18. She was/is buried in the G.A.R. Cemetery beside Eli.