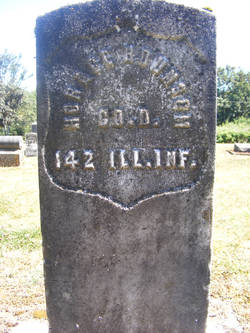 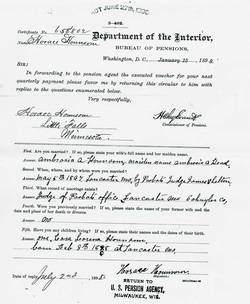 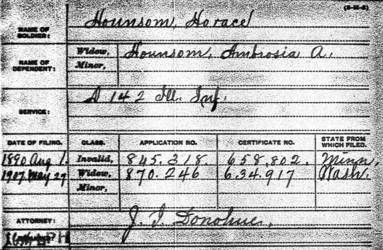 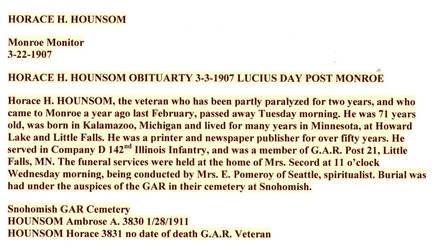 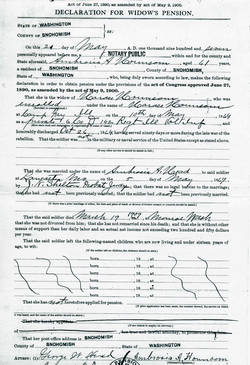 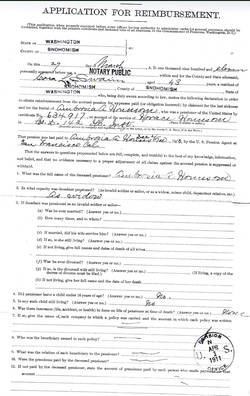 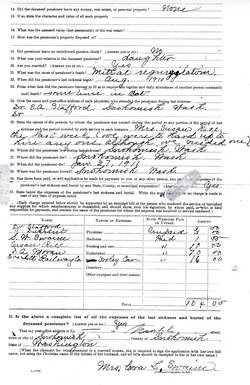 With the onset of Union gen. U.S. Grant’s and W.T. Sherman’s 1864 campaigns a call went out for states to organize “100 day” regiments which would provide railroad guard and garrison duties thus freeing up more seasoned troops for combat movements.

The 142nd was one of these units.  On 6/21/64, shortly following federal muster, the 142nd’s ten companies moved to Memphis, TN via Cairo, IL and the Mississippi River.  The regiment arrived in Memphis on 6/21 and on 6/26/64 was assigned guard duties at White’s Station, eleven miles from Memphis on the Memphis & Charleston Railroad.

As with many of these short-term units, the 142nd remained on duty beyond their assigned time and, as such, while in the process of being discharged assisted in the defense of St. Louis during Confed. Gen. Price’s Sept./Oct., 1864 invasion of Missouri.

NOTE: The original birth – to – death biographical profile on Horace Hounsom was created during the early years of the Civil War Veterans Buried In Washington State project. As a result it suffered from both size and research resource limitations. The biography which follows was written in March, 2019. While it features many more details than its predecessor, it stall lacks the depth  and detail of more recent additions to this website which draw heavily upon veteran-related military, pension and other documents housed in the National Archives located in Washington, D.C.

Horace H. Hounsom was born in 1836. No birth month or date has been found in available documentation. His place of birth was Kalamazoo, Kalamazoo Co., Michigan.

Parents of Horace were Marcus B. (b. 9/21/76 England) and Eleanor (nee Coleman no b. d. NY) Hounsom. While it appears Horace had three brothers and two sisters, none of their names have been located within available documentation.

During the mid-1830s Henry Hounsom was the commissioner of highways in Kalamazoo County, MI. However, the time of his death on 11/5/48 he and – apparently - his family were residing in Nauvoo Hancock Co., IL. His wife – Eleanor – Frederick’s mother died there on 4/28 of the following year.

In 1850, Horace – at age 15 – was residing on his own in or near the community of Ogle, IL. What became of his siblings after the death of their parents is not known.

Horace was still residing in Ogle when, in mid- May, 1864, he enlisted in the U.S. Army. Private Hounsom’s five months in the service during the War of the Rebellion appear to have been uneventful.  Military records indicate he was always present with his unit, was not wounded, did not suffer any medical difficulties, and had no disciplinary problems.

Post war records on Horace are sketchy.  By 5/5/67 he was in Lancaster Schuyler Co., Missouri because on that date and in that location he married Ambrosia A. Head, (b. 1830). The union would produce one child Cora Leorena (b. 2/8/68 Lancaster Co., MO). (1900 Ambrosia would say she had born l child and that child was living)

After Horace and Ambrosia married they settled in Missouri. In 1870 their community of residence was still in Schuyler County, but by then the community of Glenwood. There Horace listed his occupation as “printer.”

In May, 1875 the Hounsom’s continued to reside in Missouri, but then they were living in Victor located in Wright County. No occupation is listed for Horace while in Victor.

By 1880 the Hounsoms were living in Howard Lake Wright County, MN. In that location Horace reported that he was employed in the dry goods and grocery business. Then from at least 1895 until 1905 they were in the Morrison County community of Little Falls. In that community he was again in the printing business.

Horace died 3/22/07 in Monroe Snohomish Co., WA. His obituary notes “he lived for many years in Minnesota. (There) he was a printer and newspaper publisher for over fifty years.”  It also indicates he “came to Monroe a year ago last February”.  Likely the move was made to be near his adult daughter and family.  Finally, the obituary noted he had been “partly paralyzed for two years” (possibly from a stroke). As such, Mr. Hounsom had been physically unable to make an impact on his newly adopted community. Burial was/is in the Grand Army Of The Republic (G.A.R.) Cemetery in nearby Snohomish, Snohomish Co., WA

After Horace’s death Ambrosia resided in the home of married daughter Cora.  She died 1/27/11 in Snohomish City Snohomish Co., WA.  At death she was receiving a $12 government pension based on her late husband’s Civil War soldiering. (When Horace had been granted a pension stipend and what amount he was receiving at the time of his death is not known.)  Cora subsequently petitioned the government for reimbursement of $104.05 paid out for her mother’s care and burial expenses.  It is not known if the petition was granted. Ambrosia was buried in the G.A.R. Cemetery beside Horace.