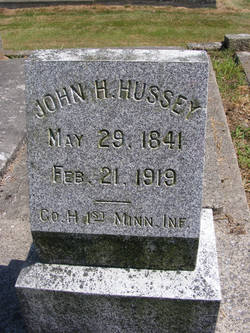 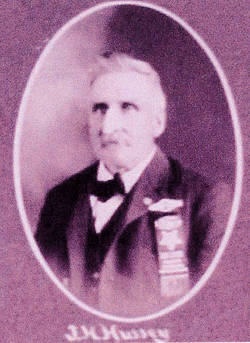 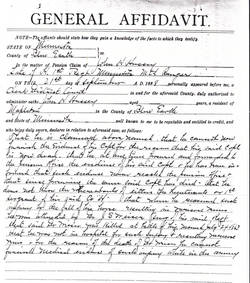 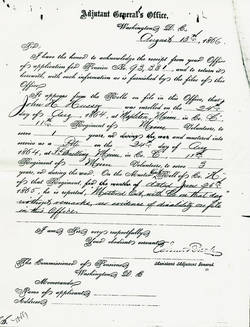 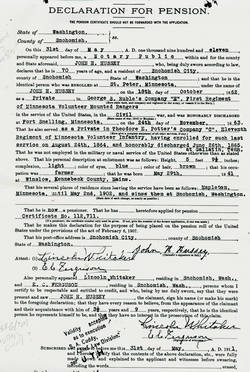 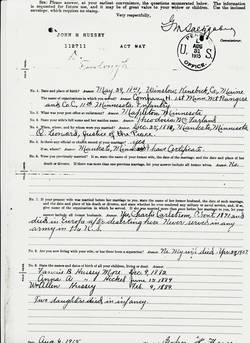 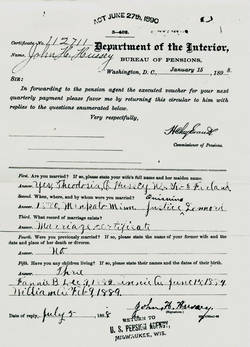 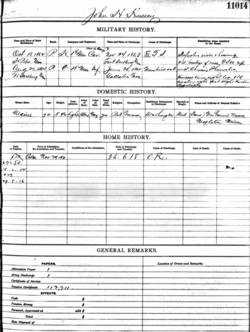 A one year regiment, the 1st was thrown into the Sioux uprising which exploded in MN during 8/62. The initial battalion raised was immediately sent to the Minnesota/Dakota frontier and “remained there all winter”… The rest of the regiment was … stationed at “various places within the state.”

By the summer of “63 the “hostiles” had primarily been pushed westward into the Dakota Territories. It was here, during “The Sirocco Campaign” that some, if not all elements of the 1st saw combat with Native Americans. While unit losses were small in the engagements, the Dakota prairie environment- intense summer sun, hot dusty ear, scorching breezes, and alkaline of brackish drinking water-lead (or would lead) to as much or more suffering, sickness and death for soldiers, horses, and mules, as did the fighting.

The 1st began to muster out on 10/20/63. The last company was dismissed in early December. Remnants of the regiment were re-mustered as the 2nd MN Vol. Cav.

This one year regiment was organized during Aug./Sept., 1864 with companies mustered in on various dates. The unit immediately reported to Nashville with elements then distributed throughout Tennessee to guard railroads against guerilla attacks. For some companies the “wearisome” routines of guard, picket and patrol duties were occasionally spiced by chasing guerillas or, as in one instance, the recapture of a stolen heard of 1500 cattle. Early in the summer of 1865 the guerillas surrendered, so on 6/26 the 11th started for home.

NOTE:  The original birth – to – death biographical profile on John Hussey was created during the early years of the Civil War Veterans Buried In Washington State project. As a result it was limited in both size and available research sources. The biography which follows was written in March, 2019. While it contains many more details than the original, it still suffers in terms of depth of detail when compared to more recent additions to this website which draw heavily upon veteran – related military, pension, etc. files housed in the National Archives located in Washington, D.C.

As noted by the birth states of the Hussey children, at some point between 1841 and 1862 the Hussy’s quitted Maine and moved to Minnesota. The U.S. Census for 1860 placed the family in or near the community of Mapleton located in Blue Earth County.

In the fall of 1862 John, a healthy robust, blue eyed farmer then residing in Middleton Blue Earth Co., MN entered the U.S. Army’s 1st MN Mtd. Rangers. In April, 1863, while engaged in trench jumping drill at Ft. Ridgley, MN Pvt. Hussey’s horse fell on him severely spraining his right leg. The injury apparently limited the trooper’s future Army duties to that of cook.  That summer Hussey participated in an expedition from Ft. Ridgley, west to the Missouri River during which he drank alkali water and suffered from exposure. Later, in October, as a result of these rigors Hussey contracted typhoid and alkali fever. Losing consciousness, he was confined to the hospital at Ft. Smelling. It was there, while still unconscious that he was discharged from the 1st.

In 8/64 John Hussey retuned to Federal service as a private in the 11th MN Inf. On 5/18/65 while on general duty with the 11th at Mitchellville, TN he was standing on a log when his musket, the butt of which was resting on the same log, slipped off and discharged, the ball hitting him in the left wrist.

Following the ending of hostilities in 1865 the 5’9 ½ “ Hussey returned to Minnesota and his parents’ farm in Blue Earth County According to a later affidavit, due to his military injuries, “it was 5 or 6 months after his discharge (before) he was able to perform any manual labor on the farm.”

On 12/25/80 at Mankato, MN John. married Theodorsia Orilia (nee McFarland b.1/27/50 Mercer Co., PA) Carlestrom. Theodorsia had been previously married to a Mr. Charlie Carlestrom who, about 1871, died in Europe after deserting her.

By the mid 1800’s John Hussey’s army disease/injuries, particularly varicose veins stemming from the horse accident while in the military prompted his application for a U.S. Government invalid pension. At some point the pension was granted for, at the time of his death, Hussey was receiving a $38 per month stipend.

The Hussey’s remained in Mapleton Blue Earth Co., MN until 1900 when they moved to the Puget Sound region of Washington State. In Washington settled in the city of Snohomish located in the county of the same name.  Why the move was made is not documented.

Theodorsia Hussey died in Snohomish, Snohomish Co., WA on 4/27/07. Details of her passing are not known. She was/is buried in the Grand Army Of The Republic (G.A.R.) Cemetery in Snohomish.

In 1910 John was still in Snohomish, but residing with married daughter Anna and family. The following year he became a resident of the old soldiers home located in Sawtelle Los Angeles Co., CA. Details of his admission there are not documented.

John Hussey died on 2/21/19 at the age of 77 yrs. 8 mos.   At the time of his death he was a resident of the .Washington State soldiers’ home located in Retsil Kitsap Co., WA. Burial was at the Snohomish G.A.R. Cemetery beside Theodorsia.