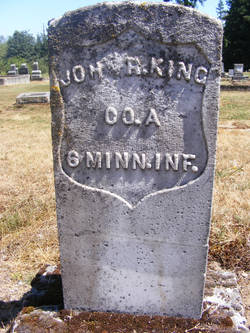 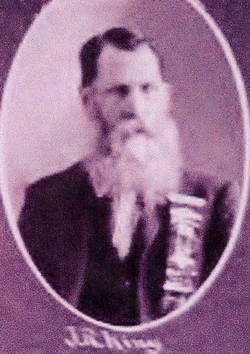 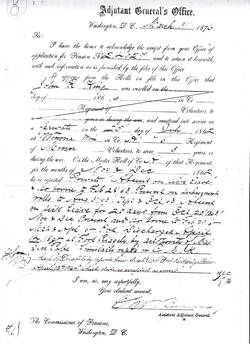 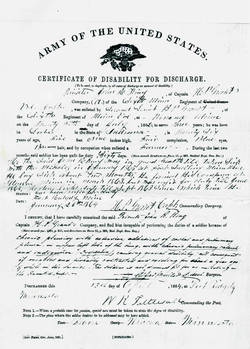 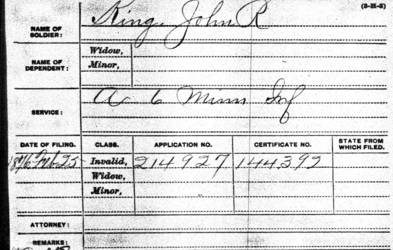 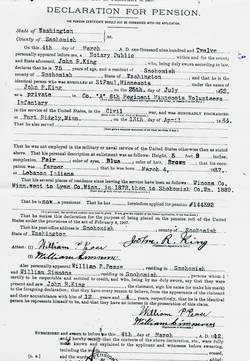 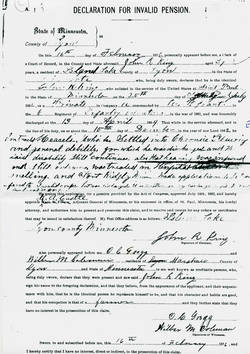 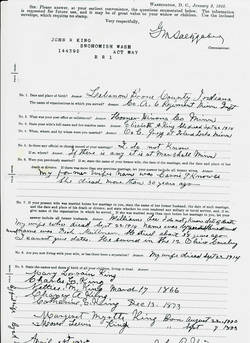 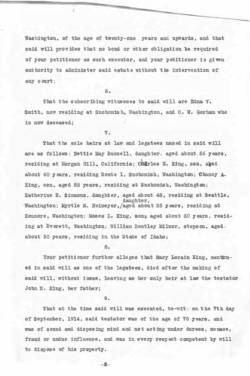 The 6th, a three year regiment, was organized at Ft. Snelling, Minnesota during the summer of 1862 and mustered in by companies throughout the fall (Co. A 1/1 at Camp Release).  It was in August of that year that Minnesota suddenly ran red with the blood of white settlers because of an uprising of the Sioux tribes. In this hour of crisis four of the 6th’s initial companies plus “such civilians as would join” were immediately ordered to Ft. Ridgley.

During this movement Co. A and a group of “civilian cavalry” was detached as a burial detail. Encamping at Birch Coolie, about 4 o’clock the next morning the assemblage was attacked by 500 Indians. The subsequent “battle” (9/1-2-3) lasted until a rescue party, using artillery, drove away the hostiles. Loss to the 6th group: 23 killed, 45 wounded and the death of all 87 their horses.

Other than accompanying General Sibley’s expedition against the hostiles into the Dakotas (6/16-9/23/63), the 6th remained garrisoned throughout Minnesota until 6/9/64 when it was consolidated and shipped to Helena, AR to fight Rebels The move from the relatively harsh weather of the N.W. frontier to the disease-producing climate of the south proved medically disastrous.

Arriving in Arkansas 940 strong, the months ahead saw disease waste away the 6th to a point where, at one point, only 26 men reported for duty. As a result of this wastage, in 10/64 the unit was assigned provost guard duty in St. Louis, Mo.

Later, in 3/65 a revitalized 6th was sent to Louisiana where it landed at Dauphin Island and participated in the capture of Fort Blakely. The unit then moved to Montgomery, Alabama where it remained until 7/65. After this the 6th returned to Minnesota for final muster.

NOTE:  The original birth – to – death biographical profile on John King was written during the early years of the Civil War Veterans Buried In Washington State project. As a result it suffered from size limitations and lack of research resources. The biography which follows was created in March, 2019. While containing many more details than the original, it still lacks the depth of more recent additions to this website which draw heavily upon veteran – related military, pension and other files housed in the National Archives in Washington, D.C.

As with many veteran profiles, the spelling of names of wives, children and others abound. The same holds true for birth years and dates. While we attempt to be as accurate as possible in all instances, sometimes names and numbers cannot be pinpointed.

As best as can be determined John was the first of three children born to Moses and Mary. Younger than he were Margaret P. (1839 IN), Katherine “Kate” (b. 1842 IN).

By 1850 Mary had died during the birth of one of her children. Available documents are both silent on her death date and unclear if her death was in conjunction with the birth of Katherine/Catherine or an unidentified infant who did not survive.

On 7/25/62 5’9”, blue eyed John left his bride and farm to join the U.S. Army. The following month Minnesota erupted in bloodshed as Native Americans began slaughtering settlers along the Minnesota/Dakota Territory border. As a result, Minnesotans enlisting to fight Rebels down south instead found themselves remaining in Minnesota fighting red men. Such was the case with Private King’s regiment the 6th Minnesota Volunteer Infantry.

Mid December, 1862 found Private King in the hospital at Ft. Snelling, MN, not because of an Indian arrow or bullet, but because of the measles. Complications of the disease lead to respiration and stomach difficulties which resulted in his being assigned to “light duty.” His health further deteriorated until April, 1863 when, after being “unfit for duty for sixty days  (and his application for a transfer to the Veterans Reserve (Invalid) Corps – an arm of the military created to utilize troops deemed unfit for field duty because of wounding or disease – was rejected) he was medically discharged. John R. King had likely never seen, let alone fired a shot at a Rebel soldier.

On 5/1/75 the Kings were still in Minnesota, but no longer in Winona County. By that May they were in (Leland) Lyon County. When the intra-state move had occurred and why is not known. It was there – sometime between that May and December, 77 that Carrie died. No details are available pertaining to her passing. Also not known is where she was/is buried.

In 1889 the John King family moved westward from Minnesota to Washington Territory/State. What drew them to the Puget Sound region is not documented, but perhaps it was the urging of one or more adult children already residing in the area.

By the time of the 1900 U.S. Census the Kings had settled in the Shorts Precinct located near Snohomish City in Snohomish County. There John “converted a portion of the wilderness into a comfortable and pleasant home, where he lived, enjoying the respect and kind affectionate regards of his neighbors and numerous friends.”

In 1910 the King home was noted as being in the Ludwig District of Snohomish County.  As of that year the household consisted of John, Elizabeth and nine year old adopted daughter Madeline F. (King).

Elizabeth died on 9/22/14. Neither a death certificate nor an obituary pertaining to her passing is available.  She was/is buried in the Grand Army Of The Republic (G.A.R.) Cemetery in Snohomish, Snohomish Co., WA

After Elizabeth’s death John remained- at least until 1920 - in his Snohomish County, Ludwig District home. The U.S. Census found him there sharing his abode with a widowed house keeper and her teenaged daughter.  Documental indications point to his having remained in that residence until his passing.

John died on 5/6/25 at the age of 88 years and 2 months. He was, at the time, receiving a “princely” U.S. Government pension - based on ailments or illness which he traced back to his days of Civil War soldiering - of $72 per month.  He was/is buried beside Elizabeth in the G.A.R. Cemetery.